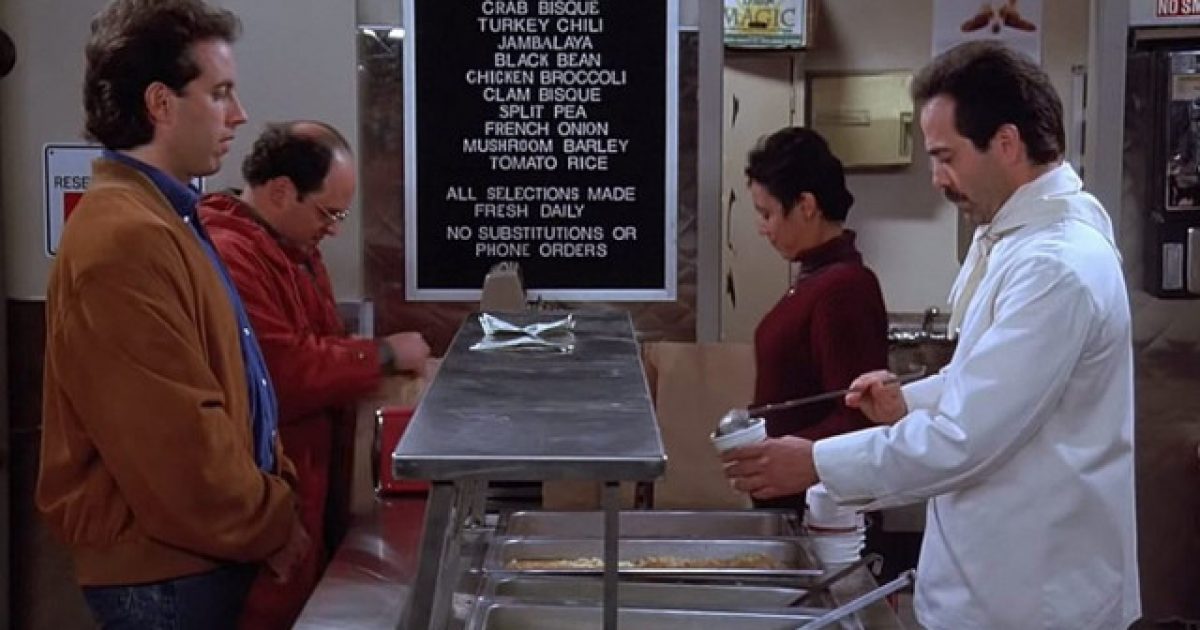 The generation we not-so-fondly refer to as “millennials” seem to belong to a unique group of individuals in history that have found a way to be perpetually offended by anything and everything under the sun.

How they’ve managed to achieve such a feat seems to stem from the indoctrination of progressive ideals at an extremely young age, via the delivery system known as public education.

The latest outrage to pour forth from millennials has to do with the still popular comedy series “Seinfeld,” and how it cracks jokes about the “soup Nazi” and same-sex relationships.

It never ends, does it?

Millennial-focused website Bustle is taking heat for publishing a listicle that examines all the reasons why “Seinfeld” would be a little too edgy in the modern climate of policing everything that isn’t deemed politically correct.

Comedian and author Tim Young told Fox News that the article is “ridiculous,” and that it blows his mind how desperate people are to be offended, with the attack on “Seinfeld” the latest example. “Seinfeld,” which aired from 1989-1998, is widely considered one of the best programs in television history — but Bustle doesn’t exactly feel that way.

Angelica Florio’s piece, headlined “These 13 jokes from ‘Seinfeld’ are offensive now – Yes, that includes the ‘Soup Nazi,’” was published on New Year’s Eve and claims that watching the classic sitcom in 2019 will “hopefully” make viewers realize how much times have changed.

“Hopefully most people can agree that comedy, even ‘edgy’ comedy, doesn’t need to alienate marginalized groups in order to make people laugh,” Florio wrote. “Thanks to more modern understandings of what political correctness entails — and why being PC is important — it’s less common these days to find jokes like the offensive ones that often played out on ‘Seinfeld.’”

The Bustle reporter went on to condemn the “Soup Nazi” because, according to Florio, “using the term ‘Nazi’ to label someone as a joke doesn’t sit so well anymore.”

“It’s not the fault of ‘Seinfeld’ that the media 20 years later gave constant attention to a small group of radicals and gave them outsized importance. It’s also not ‘Seinfeld’s’ fault the media has made the term “Nazi” meaningless because it uses the label on anyone to the right of Nancy Pelosi,” Daily Wire reporter Ashe Schow wrote in a piece criticizing the Bustle article.

“The entire point of Seinfeld was to show four terrible people interacting in a world full of kind, thoughtful people. The humor was in how terrible they were. After all, they ended up in jail at the end of the series for violating a good-Samaritan law when they chose to laugh at an obese man getting carjacked rather than help him,” Young said.

As has been pointed out above, what kind of sense does it make to get angry over the show’s usage of the term “Nazi” when leftists toss that label around to describe conservatives and practically anyone else who dare disagree with their group think?

Seems a bit hypocritical, doesn’t it?

The whole point of comedy is to speak truth in the form of a jest to make the bitter pill a bit easier to swallow. It helps us identify our faults and failures both personally and as a society.

If we aren’t allowed to be edgy and confrontational in our comedy, how are we going to open people’s eyes to the realities of living in a fallen world?

We’re not. And that’s a tragedy.