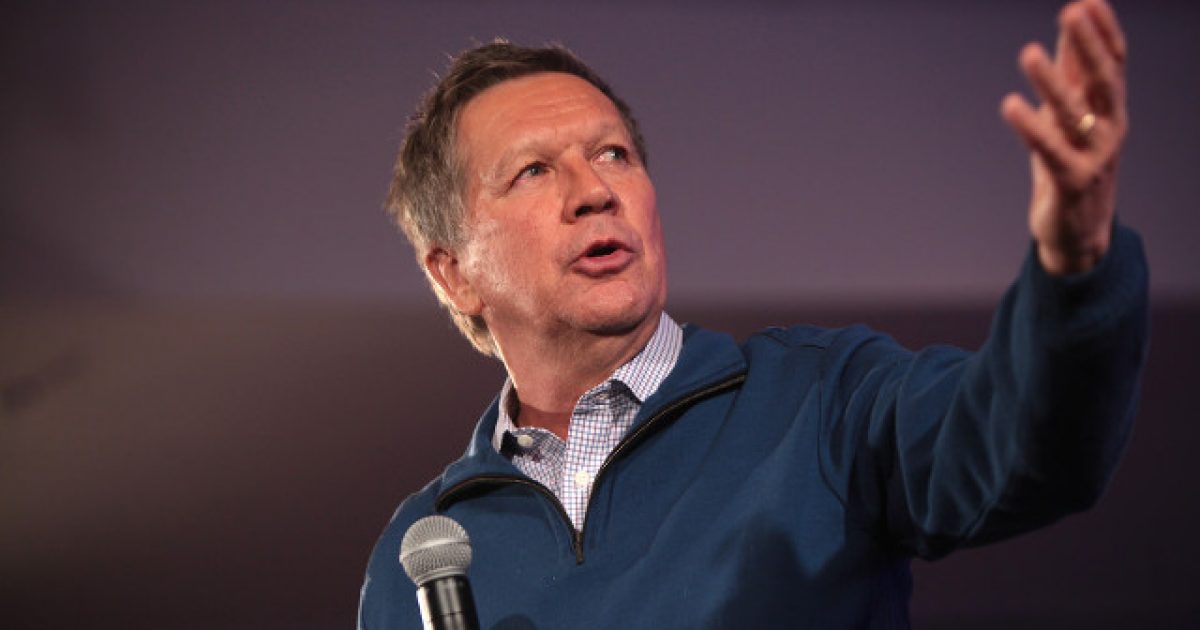 Former Ohio Gov. John Kasich doesn’t have a whole lot of fans on either side of the political spectrum, what with being a sort of cowardly people pleaser and all, a fact a liberal comedienne made quite clear when she put the man on blast for allegedly stealing her airplane seat.

Comedienne Julie Klausner claims that she was flying from New York to San Francisco on January 16 and Kasich was asked to give up his seat in first class to a pilot who needed to sleep on the flight so he could fly a plane back from San Francisco . Klausner said Kasich was asked to move to the premium economy cabin because he had paid less for his seat than the other first-class passengers.

Klausner said that instead, Kasich sat in her seat, as she was not in the cabin yet, then made a phone call complaining about the pilot who was in Kasich’s original seat. On her podcast “How Was Your Week?” Klausner stated that when she reached her seat, Kasich did not respond while she and the airline staff stood there and discussed how to fix the problem. Klausner claims she did not know at the time who Kasich was, but she offered to take a later flight. She said:

I am standing at the front and John Kasich is sitting there, either talking on his cell or on his cell phone. He knows I’m standing right in front of him because that’s my seat. Finally a ticket agent comes on the plane and looks and sees that John Kasich is sitting there and he shook his head and he says, “This guy was downgraded and he refused to go into the seat he was newly assigned and he sat in yours and that’s your seat” … Instead of saying, “Okay, I’m going to go sit in 12C which has the extra legroom,” she said it was premium and not economy, he got really mad and was a total d**k to the staff and sat in my seat instead. That is what was told to me.

Omg this is insane. Kasich was asked to move to premium from first class & took my seat instead. I volunteered to take a later flight instead of fighting. @alaskaairlines, your employees are the BEST, sweetest people. And thanks, airport employees, for working without pay today. https://t.co/vmnBEIds0S

Klausner claimed the airline staff “vented” to her for “15 minutes about how much they disliked people like Kasich”; she said, “They were basically saying, ‘we just say that guys like this push people around and they get what they want.'”

Fox News reported that Klausner later said, “The funny thing about it is when I tweeted about it, I realized people on both sides hate him. Because I guess Republicans hate him because he’s like, you know, not fascist enough, and then obviously people on our side hate him because he’s just a bad person. Just having interacted with him or interacted near him, I never met anyone so d—–y and obnoxious and just dripping with disdain for people who in his mind aren’t as important as he is. I hope he — I don’t know. I hope he goes away forever. He sucks.”

Feel free to roll your eyes at the whole “fascist” bit in her comment, because, as usual, a leftie has no idea what conservatives actually believe or want for America’s future.

However, that doesn’t change the fact that Kaisch truly isn’t well liked by anyone. He’s very soft in the backbone and doesn’t really believe the principles he claims to espouse. He’s totally a progressive in a conservative’s suit.

When you think about it, these two really do deserve each other.