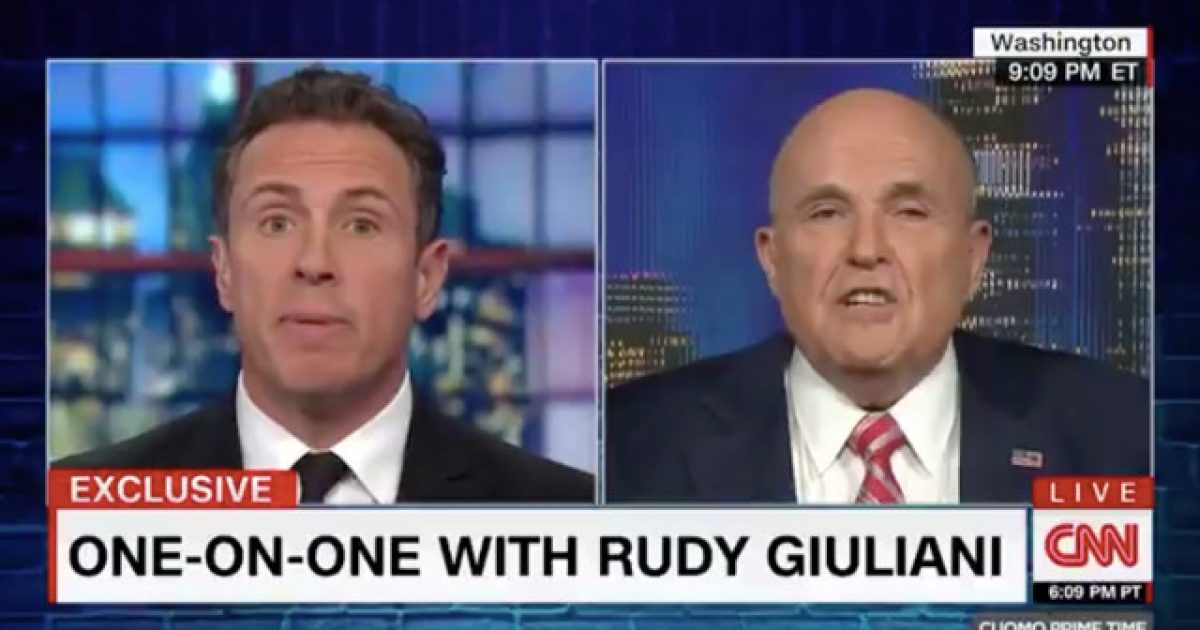 President Trump’s personal lawyer, Rudy Giuliani, set off a firestorm this week when he made a huge boo boo during an interview with CNN, stating he “never said there was no collusion between campaign, or people in the campaign.”

Giuliani is now on the defensive, issuing a statement to the Associated Press on Thursday to attempt to straighten out the matter.

In another statement Thursday, he emphasized what he’d told CNN Wednesday: “there was no collusion by President Trump in any way, shape or form” and he had “no knowledge of any collusion by any of the thousands of people who worked on the campaign,” AP reports.

The statements come in response to his widely reported interview with CNN’s left-leaning host Chris Cuomo Wednesday in which Giuliani stated that he’d “never said” individuals from the campaign hadn’t been in contact with Russia, only that his client Trump and the campaign in general had not “colluded” with Russia.

“I never said there was no collusion between the campaign, or people in the campaign,” Giuliani told Cuomo, the Daily Wire reported. “I have no idea if …”

“Yes, you have,” Cuomo interjected.

"I never said there was no collusion between the campaign or between people in the campaign… I have not. I said the President of the United States," Pres. Trump’s attorney @RudyGiuliani tells @ChrisCuomo https://t.co/Jy0gttT6Ac pic.twitter.com/JGISmtgrdy

Boy, when CNN grabs a hold of a comment, they don’t mind ripping it right out of its context and then twisting it every which way to make it say what they want.

Giuliani clearly means he represents only the president, and that the president himself is not guilty of any collusion. His comment on Cuomo’s program was stating that he doesn’t know if anyone else has colluded or not, but the president hasn’t.

That is a simple, matter-of-fact, plain Jane statement. Yet the kings of fake news couldn’t wait to rip that comment apart and use it to push their own narrative.

And these folks wonder why no one trusts CNN anymore? Seriously?