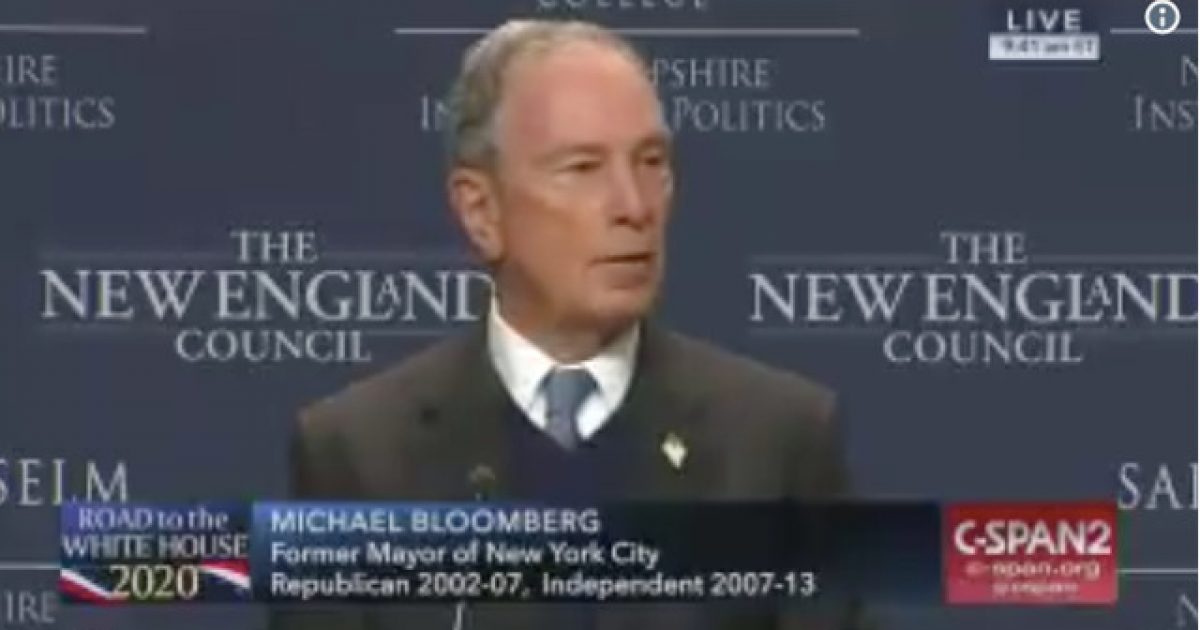 You know you’re a radical left-winger who has gone a step or two too far when notoriously liberal former New York City Mayor Michael Bloomberg comes after you.

Bloomber recently unleashed his fury on Sen. Elizabeth Warren, Rep. Alexandria Ocasio-Cortez, and basically anyone who thinks socialism is a good idea.

“You can’t ask people affected by the transition to a green economy to pay more unless you deliver economic benefits in the form of good jobs, and better infrastructure, that they will feel in their lives and in their communities,” Bloomberg said. “You have to help all workers affected by the shift from fossil fuels to clean energy and it just can’t be an afterthought, it has to be a concrete plan. It has to be a central part of any environmental plan or it will fail.”

Bloomberg then took aim at Ocasio-Cortez, a 29-year-old bartender turned politician who has advocated for the “Green New Deal,” which would cost an estimated $49 trillion over the next ten years. Ocasio-Cortez has repeatedly failed to explain how she would pay for her radical plan.

“A lot of elected officials embraced the idea of a Green New Deal and that’s great,” Bloomberg continued. “It’s become fashionable to do so, but I think it’s time as a party that we started putting some meat on the bone and laying out exactly how a green new deal should — what it should include and I believe that that plan should be bold and ambitious and most importantly achievable.”

“I’m a little bit tired of listening to things that are pie in the sky that we never are going to pass, never going to afford,” Bloomberg continued. “I think it’s just disingenuous to promote those things. You’ve got to do something that’s practical.”

Michael Bloomberg slams Ocasio-Cortez: "I’m a little bit tired of listening to things that are pie in the sky that we never are going to pass, never going to afford. I think it’s just disingenuous to promote those things. You’ve got to do something that’s practical." pic.twitter.com/WFbDo9OyWK

Fox News reports that while “speaking with reporters following a tour of a manufacturing plant in Nashua, Bloomberg criticized the ‘Green New Deal,’ a bill being pushed by Ocasio-Cortez and other progressive lawmakers that would eliminate much of the United States’ fossil-fuel consumption.”

“You have to have realistic things; we are not overnight going to change everything we do,” Bloomberg said. “People aren’t going to overnight give up their jobs if those jobs happen not to be on the side of the Green New Deal.”

Michael Bloomberg on Medicare for all: "You could never afford that." https://t.co/ifDPMhGVOr pic.twitter.com/qbnRuU4UMx

Universal health care is not only extraordinarily expensive and leads to all sorts of economic problems for a society, but the quality of the care received dramatically decreases as well.

Funding for cures for diseases that ravage mankind will no doubt dry up because available cash flow that is redirected toward such endeavors will be used to cover basic expenses as taxes increase.