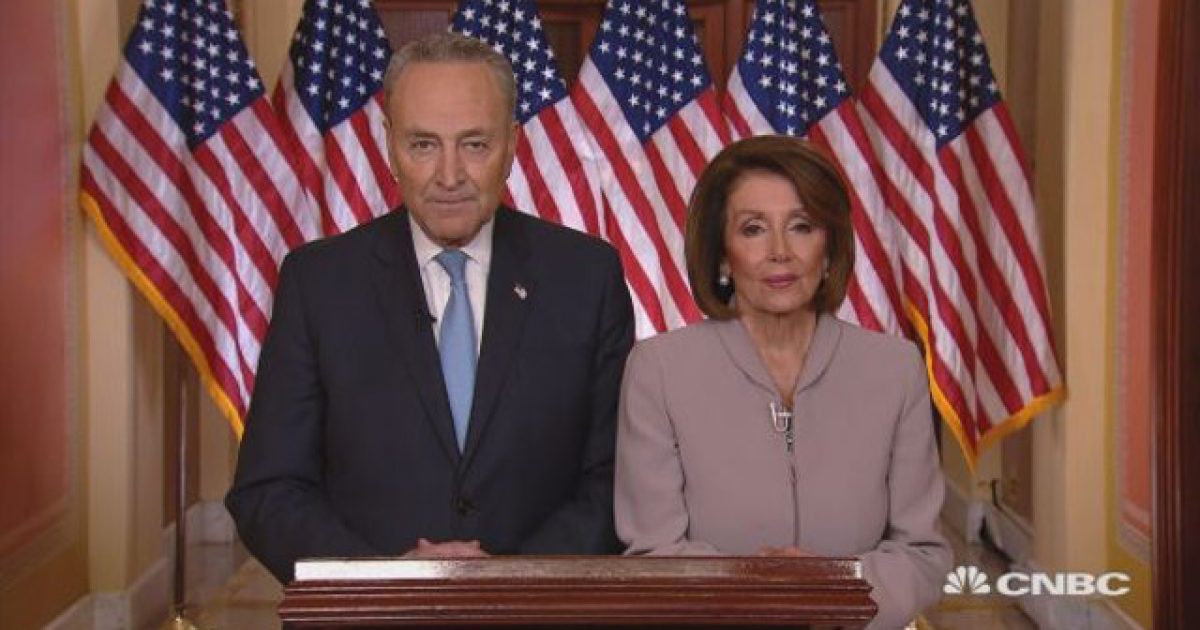 One of the first folks from the Democratic Party to respond to President Trump’s speech on the state of the southern border last night was Senate Minority Leader Chuck Schumer.

Schumer complained that a border wall would be “ineffective” and “unnecessary.” However, this particular sentiment is the exact opposite of what he said on the issue back in 2009.

In 2009, Schumer said that hundreds of miles of border fencing made the border “far more secure” because it “created a significant barrier to illegal immigration on our southern land border.”

Chuck Schumer in 2009: "630 miles of border fence" made our southern border "far more secure" because it "created a significant barrier to illegal immigration" pic.twitter.com/3ywVpKu2LH

Here’s a transcript of what Schumer said in his statement after Trump’s speech:

My fellow Americans, we address you tonight for one reason only: the president of the United States — having failed to get Mexico to pay for his ineffective, unnecessary border wall, and unable to convince the Congress or the American people to foot the bill — has shut down the government. American democracy doesn’t work that way. We don’t govern by temper tantrum. No president should pound the table and demand he gets his way or else the government shuts down, hurting millions of Americans who are treated as leverage. Tonight — and throughout this debate and his presidency — President Trump has appealed to fear, not facts; division, not unity. Make no mistake: Democrats and the president both want stronger border security. However, we sharply disagree with the president about the most effective way to do it. So, how do we untangle this mess? There is an obvious solution: separate the shutdown from the arguments over border security. There is bipartisan legislation — supported by Democrats and Republicans — to reopen government while allowing debate over border security to continue.

There is no excuse for hurting millions of Americans over a policy difference. Federal workers are about to miss a paycheck. Some families can’t get a mortgage to buy a new home. Farmers and small businesses won’t get loans they desperately need. Most presidents have used Oval Office addresses for noble purposes. This president just used the backdrop of the Oval Office to manufacture a crisis, stoke fear, and divert attention from the turmoil in his administration.

My fellow Americans, there is no challenge so great that our nation cannot rise to meet it. We can reopen the government and continue to work through disagreements about policy. We can secure our border without an expensive, ineffective wall. And we can welcome legal immigrants and refugees without compromising safety and security. The symbol of America should be the Statue of Liberty, not a 30-foot wall. So our suggestion is a simple one: Mr. President: reopen the government and we can work to resolve our differences over border security. But end this shutdown now.

This is proof that Democratic politicians only care about one thing. Winning future elections and keeping themselves employed. That’s really it.

Individuals like Schumer change their policy positions to match what’s popular at the time in order to attract the largest number of potential voters possible. This is about money and power. Nothing else.

There’s no real concern for the immigrants coming into this country, legally or otherwise. They are just pawns being used to further the progressive agenda.

What’s even more tragic is how easily duped Democratic voters are. Let’s hope they wake up soon.