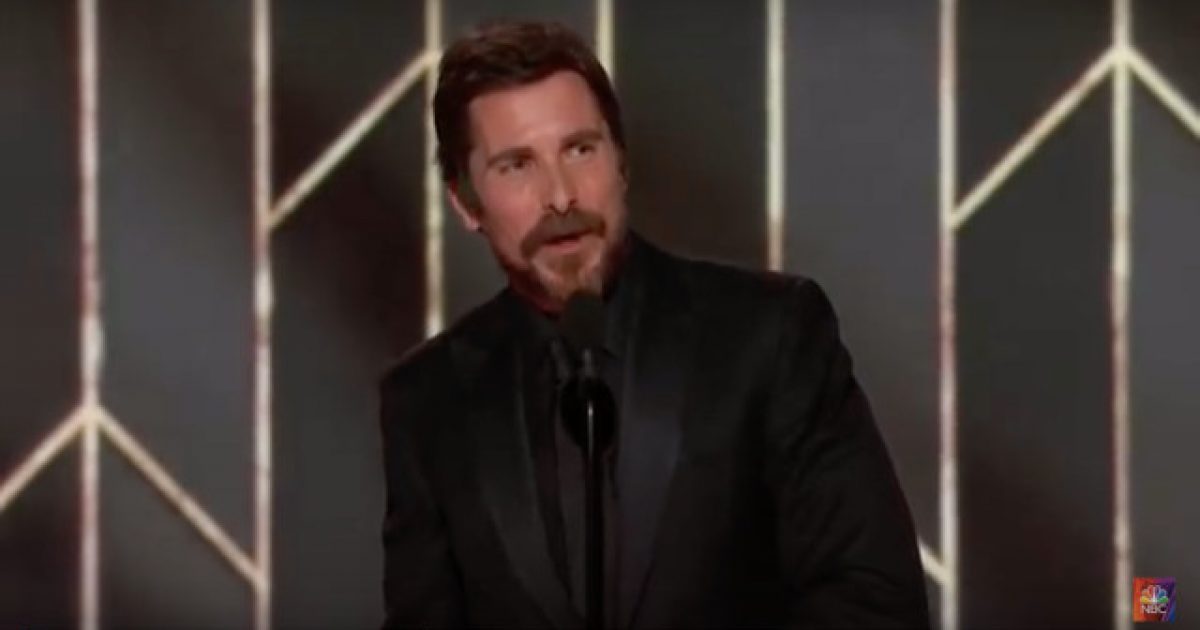 Actor Christian Bale received a Golden Globe for best actor in a comedy or musical for his performance as Dick Cheney in the film “Vice.”

During his acceptance speech, Bale admitted that sometimes, when he gets behind a microphone, “dumb crap can come out of his mouth.”

That sentence proved to be rather prophetic because moments later, some dumb crap did indeed issue forth from his mouth.

What did he say that was so idiotic to necessitate an entire post about it? He thanked Satan for inspiring the role that landed him the award. And if that wasn’t bad enough, the Church of Satan was tickled pink by the whole affair.

Specifically, he gave a shout out to Satan for helping him capture the essence of former Vice President Dick Cheney in “Vice,” as Variety said Bale was “widely praised” for his work on the part, “seemingly disappearing into the role of the resilient and ruthlessly ambitious politician” — even gaining 60 pounds.

“Thank you to Satan for giving me inspiration on how to play this role,” Bale said, drawing smiles and laughs from the Hollywood crowd.

Ye olde Church of Satan also got a charge out of Bale’s thank you to their hero, noting on Twitter: “To us, Satan is a symbol of pride, liberty and individualism, and it serves as an external metaphorical projection of our highest personal potential. As Mr. Bale’s own talent and skill won him the award, this is fitting. Hail Christian! Hail Satan!” 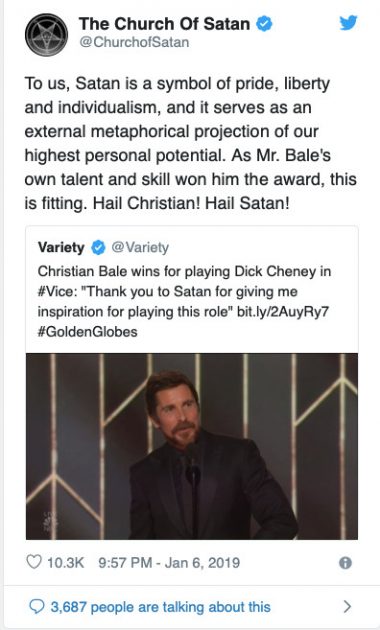 Bale was self-deprecating while thanking “Vice” director Adam McKay for giving him the Cheney part — but took the former VP down with him.

“He said, ‘I’ve got to find somebody who can be absolutely charisma-free and reviled by everybody.’ And he went, ‘Ah it’s got to be Bale in it.’ … Thank you, and for all the competition, I will be cornering the market on charisma-free a**holes,” the Hill reported.

Well, from all the stories that have emerged from the sets of his movies, Bale has definitely earned the title of the last part of the whole “charisma-free” thing.

Anyway, what’s more disturbing is how the Church of Satan tries to play this off as if Bale was actually a big fan of the Devil. He was obviously calling Cheney pure evil, like Satan, and not at all attempting to actually give thanks to the fallen angel, nor the “projection of his highest personal potential.”

These people are constantly attempting to paint themselves up as harmless hedonists, but come on. If you say you’re a follower of the Prince of Darkness, that’s what you are. At least have the intestinal fortitude to admit it.