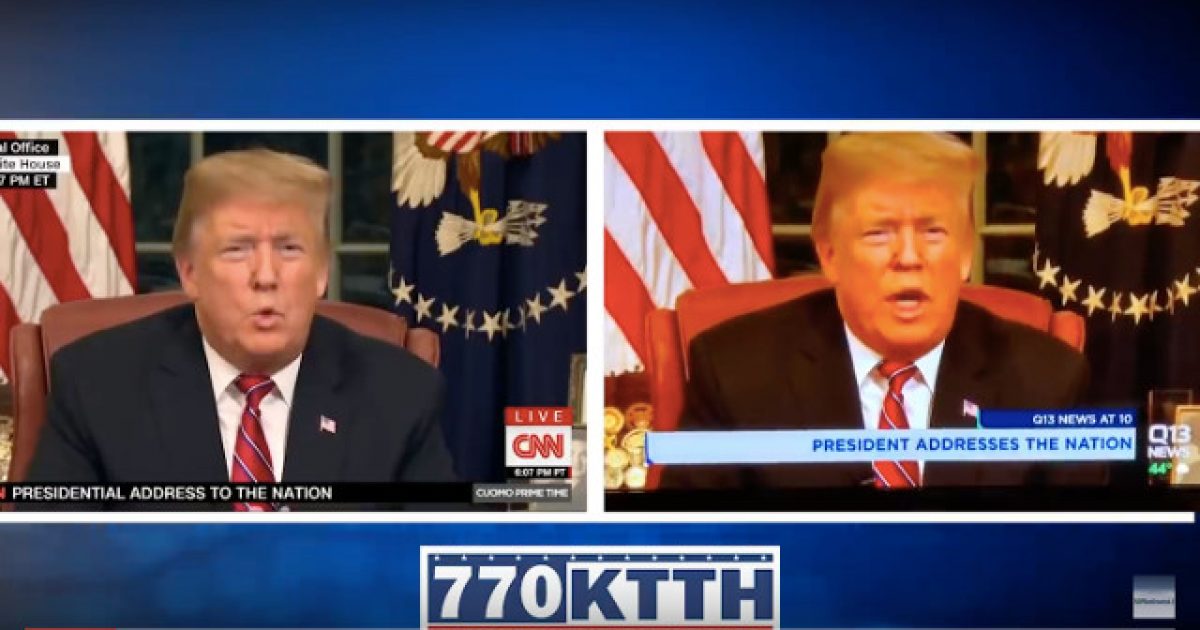 A news staffer recently discovered that it doesn’t pay to put up a doctored video of President Trump, after putting one up on a live television broadcast.

Yes, as it turns out, such a move is very costly. It cost this individual their job. Ouch.

That’s what appears to have happened to a staffer at Fox News affiliate Q13 in Seattle after the now-former employee aired what was clearly an altered video of President Trump giving his first ever address to the nation from the Oval Office on the issue of border security.

The video the staffer aired was altered to give Trump an overly-large mouth and to make him at one point push his tongue out in bizarre fashion. The colors of the video were also adjusted to make him look more orange.

“Hopefully, we can rise above partisan politics in order to support national security,” the president said, pausing to lick his lips strangely.

A local radio station was tipped off about the altered video and produced a side-by-side comparison (see below).

“A listener to my program sent me a video that appears to show a deceptively edited video of President Trump’s speech from the Oval Office,” KTTH’s Todd Herman reported Thursday. “We performed a side-by-side comparison of the video from our listener, apparently taken by a smart phone recording of Q13, to the raw video of Trump’s speech from CNN. That comparison revealed the Q13 video creating a loop of the President licking his lips — making it seem bizarre and unbalanced — it also seems that someone distorted the President’s face and may have added an orange tone to his skin.”

The Fox affiliate quickly suspended the editor responsible and issued a statement to KTTH late Wednesday. “This does not meet our editorial standards and we regret if it is seen as portraying the president in a negative light,” Q13 news director Erica Hill told the station.

Hill followed that statement up Thursday morning with the announcement that the editor had been fired. “We’ve completed our investigation into this incident and determined that the actions were the result of an individual editor whose employment has been terminated,” she said.

It’s fine for folks who work in the media to have their own personal opinions about President Trump and pretty much any and every political issue. However, there comes a time when you have to set aside personal politics and actually do your job to help inform the public and do so in a professional manner.

The editor behind posting this video failed to act professionally and as a result, they’ve now paid the price by joining the unemployment line. Was their little act of “activism” worth losing their paycheck over?

There’s a million and one ways to be active in the political realm that won’t cost you your job. This is what happens when you ditch those and attempt to do things your own way.