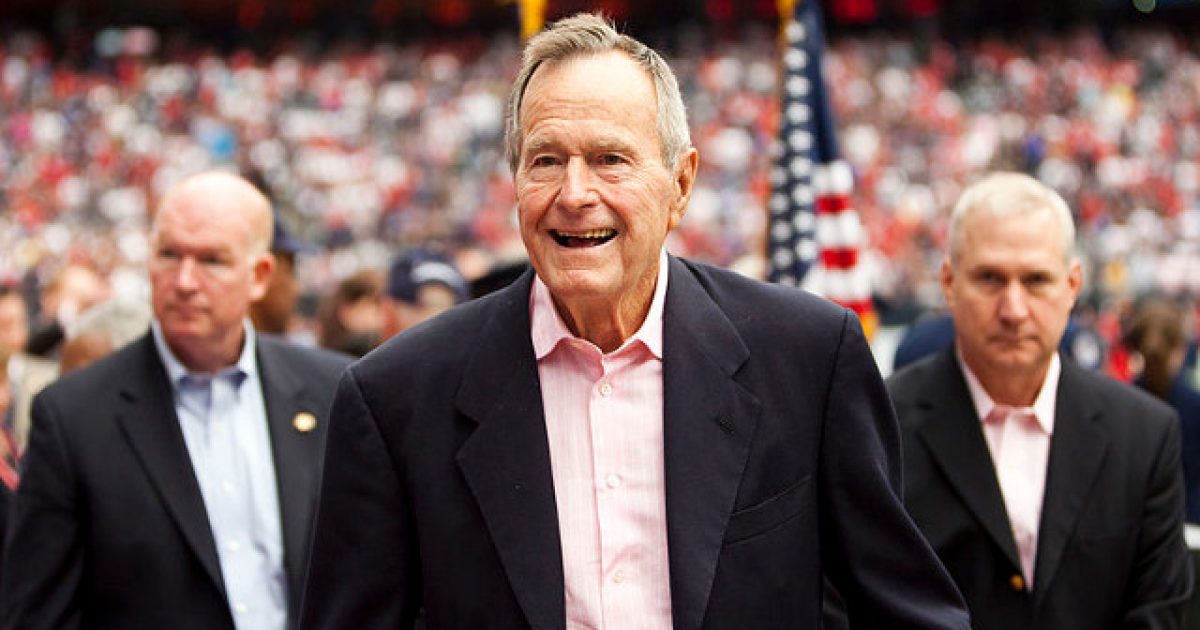 In case you needed more evidence to support the notion that former President George H.W. Bush was a man of class, integrity, and character, what he did for a filipino boy for a whole decade will satisfy that itch.

Bush apparently supported the young man for ten years, without the boy ever having a clue who he was. This guy was truly one of the good ones.

As CNN reports, the relationship was triggered in 2001, when Bush, then 77, was in the audience at a Christmas Concert in Washington, D.C. Wess Stafford, the former president of Compassion International told CNN, “Because the musicians were mostly Christian, they believed in our mission.” During intermission, “they would tell the audience about us, and ask them if they would like to sponsor a child. All of the sudden, Mr. Bush, who was sitting only a few rows back and surrounded by security, raised his hand and asked for a pamphlet,” he added.

Stafford recalled that Bush’s security team was concerned because they were unfamiliar with the pamphlet and couldn’t vouch for its authenticity. Stafford continued, “His top security called me and said ‘this doesn’t surprise me coming from him, but if he’s going to sponsor this kid, we need to make sure the boy doesn’t know who his sponsor is.’ So, he signed all his letters to Timothy as ‘George Walker.’” Stafford explained that Bush’s security team worried that if it were discovered that the boy, named Timothy, was friends with a former president, the boy’s safety would be endangered.

After making contact, Bush helped fund Timothy’s education, extracurricular activities and even some of his food. Stafford screened each letter.

The first letter from Bush to Timothy went like this:

I want to be your new pen pal.

I am an old man, 77 years old, but I love kids; and though we have not met I love you already.

I live in Texas – I will write you from time to time – Good Luck. G. Walker

Here is a picture of our dog. Her name is Sadie. She has met a lot of famous people.

She is a very good dog she was born in England. She catches mice and chipmunks, and she runs like the wind. G. Walker.

I love that picture of you holding that ‘World Time’ gadget. I also have learned that you play the guitar – terrific!

In response, Timothy would send Bush hand drawings, expressing to the president how much he enjoyed art. How did Bush respond? He sent color pencils, sketch pads, and paint. Awesome, right?

Here’s a letter to Bush from Timothy.

How are you? I hope you’re in good condition.

I would like to thank you for not forgetting me. You’re so nice and good.

God is so good to us. He gives us the body & will to get to where we want to go.

Thank you so much for the book, I like it very much.

After young Timothy graduated high school, Stafford’s executive assistant Angie Lathrop flew to the Philippines and informed Timothy who “George Walker” actually was. This was the last time there was contact with Timothy.

This, ladies and gentlemen, is the kind of character you want your commander-in-chief to possess. A president should be above reproach in his moral conduct. This doesn’t mean perfection, of course, but they should be of upright character. Clearly that was the case for George H.W. Bush.

Look what a difference he made in this one boy’s life. And he did it without expecting a drop of attention from the media. This was simply something he felt passionate about. We sure could use more like Bush.