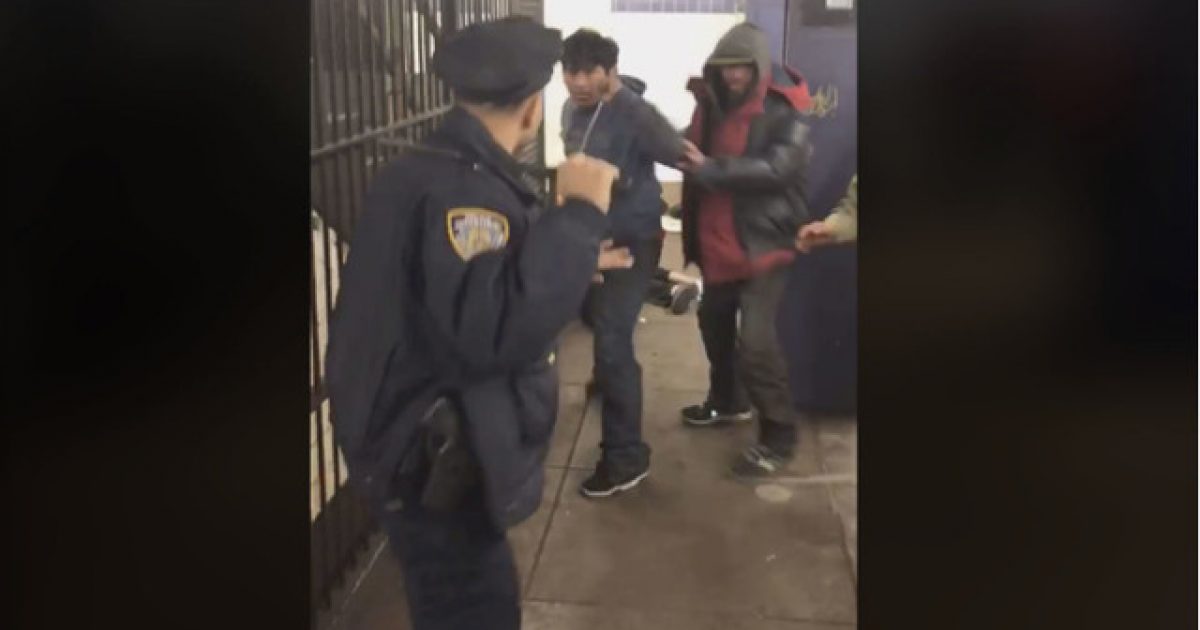 A police officer with the New York City Police Department is receiving some pretty high praise for fending off a group of drunken homeless vagrants who attacked him in a subway station.

The incident, which happened on Sunday, started when this same group of miscreants started harassing a woman in the subway. The officer, working alone, approached the men, staggering them with his baton.

In the video, the officer — who was working alone — approached the group of men with his baton.

The officer — later identified as Syed Ali — warned the men to back off and to leave the station, but several of them insisted on moving forward with apparent intent to fight Ali.

“Stand back!” Ali can be heard saying on the video. “I don’t want to hurt you!”

Ali kicked at one of the men in the group, who was advancing Ali with his fists raised, knocking him off his balance. A second man attempted to rush Ali, but the man ended up falling on the subway tracks.

According to WNBC-TV, Ali requested backup and shut the subway tracks’ power down so Ali and other officers could help the man off the tracks.

The man on the tracks and four other individuals were taken into custody in connection with the incident.

Deutsch said that Ali was to be lauded for his “quick action to defend civilians and himself against five individuals attacking him on a subway platform,” and praised Ali’s restraint for not pulling his service weapon on the group.

What extraordinary professionalism and bravery by NYPD Officer Syed Ali. Attacking our men and women in uniform won’t ever be tolerated. The NYPD is upping its presence at this station and others to ensure officers have the support they need. https://t.co/rWEAf48DEk

This officer definitely deserves the praise he’s receiving, and not just for the use of restraint. That’s important of course, but the fact he intervened, despite not having any back up, is absolutely commendable and shows just how brave this man truly is.

Police officers often get a bad rap in our day and age, but as it turns out, that’s not really all that fair. Sure, there are bad cops. Way too many if we’re being honest. However, not all of them are bad or corrupt.

Officer Ali is proof of that reality.