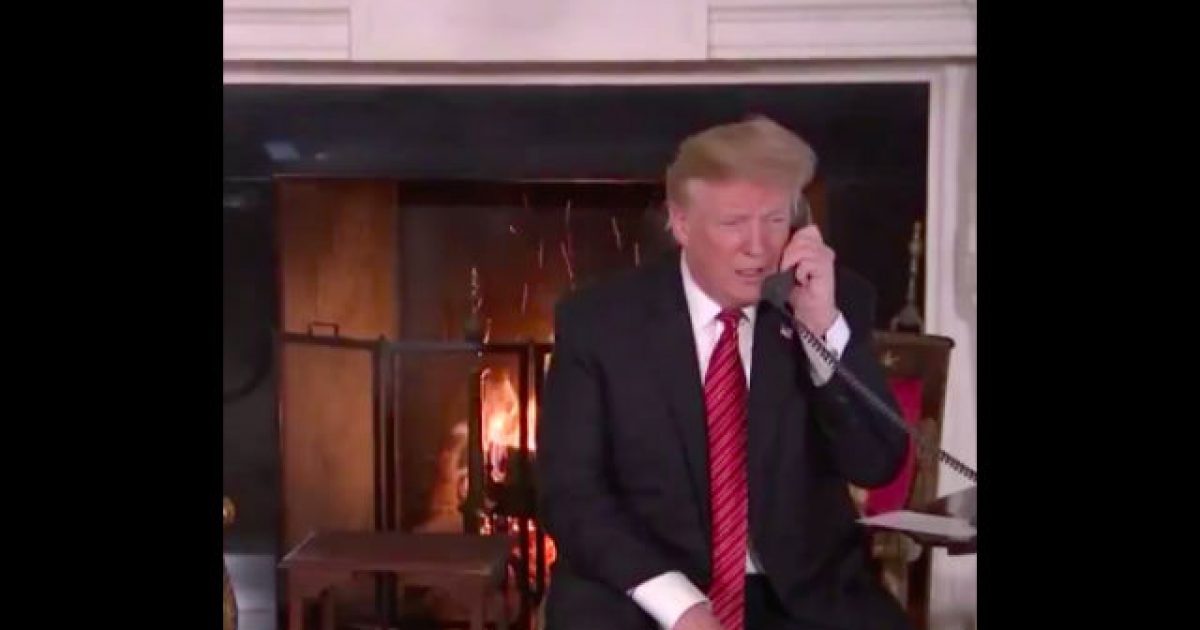 It’s become par for the course to see the radical left in America completely melt down and implode anytime President Trump sneezes or coughs, so it’s not at all surprising that they would have a fit of epic proportions about Trump taking a call from a child on NORAD’s Santa Tracker.

Apparently, a few comments made by the president during his conversation with a 7-year-old have managed to spark outrage among the perpetually offended crowd.

Like just about every statement he’s ever uttered, Trump’s opening line to the kid sparked hilarity, outrage, mockery, and, of course, hysterical accusations of Trump putting kids in “cages.”

“Are you still a believer in Santa?” Trump asks the 7-year-old caller, Coleman. “Because at seven it’s marginal, right?”

Video of the moment was highlighted by the Daily Beast:

Donald Trump, answering phone call from 7-year-old on Christmas Eve: "Are you still a believer in Santa? Because at seven it's marginal, right?" pic.twitter.com/VHexvFSbQ1

Responses online ranged from stunned disbelief to rage and mockery to non sequitur refugee references and accusations of Melania secretly working for her “motherland” — as well as some guilty admissions that Trump just made them laugh. A few examples:

Is this real? Like did he really ask a 7 year old if they still believe in Santa?

When you just learned the meaning of a fancy word (marginal) and you want to show it off.

Actually let’s change this question to: “Are you still a believer in our current president? Because at 7, it’s marginal.” It’d be much more appropriate, oh yes.

I am so sick of @MelaniaTrump posing for pictures but yet doing zero for this country. What, she wants to pose with clothes on now?!????

Meanwhile, kids are still locked in cages and dying in the custody of the American government. But let's focus on Trump ruining Santa for a seven year old, who has the privilege of believing in Santa.

Alas, not everyone lacked a sense of humor about the whole incident.

I mean, I laughed. https://t.co/dxXPZXg1sZ

If you didn’t think the left was desperate to find anything and everything under the sun to hate President Trump for, this ought to push you over the edge.

It’s ridiculous how petty liberals are becoming about this administration. It’s perfectly fine to disagree with the president and dislike his policies. Go ahead and protest against those and make your voice heard. That’s one of the glorious things about living in America.

However, it’s time for progressives to grow up and leave this sort of petty shenanigans on the wayside. Be an adult and engage in real, meaningful conversations about what you dislike.