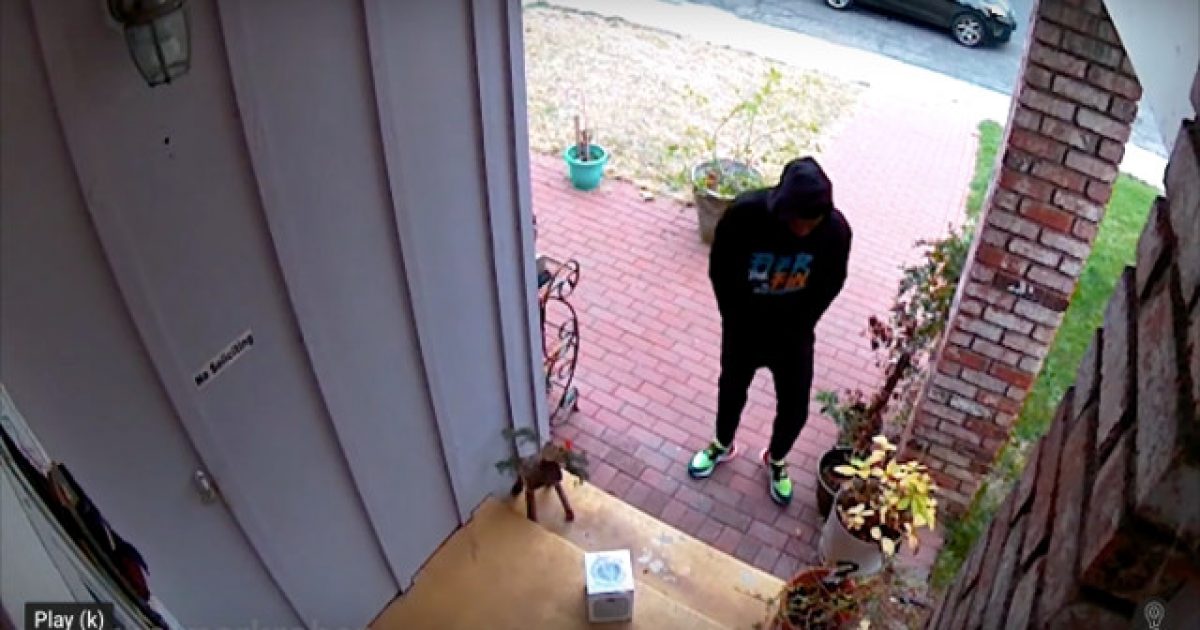 One of the most pressing problems folks face during the Christmas season is that of package thieves. Unfortunately, while the Internet is convenient for ordering the latest, hottest gifts off of sites like Amazon, you still have to make sure you’re home to receive the packages or else risk having them stolen.

That’s exactly what was happening to Mark Rober, an inventor and engineer, who decided he’d had enough of people taking his packages. He created a fake package that was rigged with glitter, a stink bomb, and a camera that would capture the thief on video receiving their “prize.”

This is pretty darn hilarious.

The video begins by showing video of Rober’s security camera catching a young couple robbing him of a package left on his doorstep. Rober comments:

If you’ve ever been in a situation like this, you just sort of feel violated. And then I took this to the police, and even with the video evidence, they said it’s just not worth their time to look into. So then you also feel powerless. I just felt like something needs to be done to take a stand against dishonest punks like this.

And then I was like, hold up: I built a dart board that moves to get a bulls-eye every time; I spent nine years designing hardware that’s currently moving around on another freaking planet. If anyone that was going to make a revenge bait package and over-engineer the crap out of it, it was going to be me.

The event galvanized Rober into action. He says, “Ultimately, when they opened the package, I just wanted to celebrate their profession with a cloud of glitter, because, I mean, who doesn’t love glitter?” Rober continues, “I just wanted to record their reaction, and that’s what makes the engineering here an order of magnitude more difficult … it’s not like you can just hit record camera and put it in the box because you’re going to run out of battery …”

A GPS signal implanted in the package alerts the four phones to start recording as soon as the package is moved; the phones use a wide-angle filming mode to capture the reaction of the thieves no matter which direction they open the package from. Even if the GPS doesn’t work, the phones have data plans that update the footage. A can of fart spray is included that would knock out a small herd of elephants, as it sprays five times every 30 seconds.

Rober notes that the package was covered with shrink-wrap to make it look as though it had actually been delivered. The package even has a return address with the name and address of the main character of the film “Home Alone.”

Rober says, “So the idea is that the bad guy comes and takes it off your porch, then lifts the lid and these two limit switches tell the circuit board brain inside that the lid’s been removed, and then that sets everything in motion.”

Once the package is taken, Rober is alerted.

What’s truly hilarious is the outrage all over the faces of the individuals who are attempting to steal his packages, as if they can’t believe someone would have the nerve to set up them up like that.

Never mind the fact they’re breaking a commandment and U.S. law concerning the theft of private property. Nope. Apparently that thought is far from their self-entitled brains.

One has to wonder if these folks will learn their lesson and opt not to return to Rober’s place and steal, or if they’ll be like a dog returning to his own vomit?

If they’re smart they’ll not only stay away but pass the word around to their thieving buddies to avoid that house this holiday season.