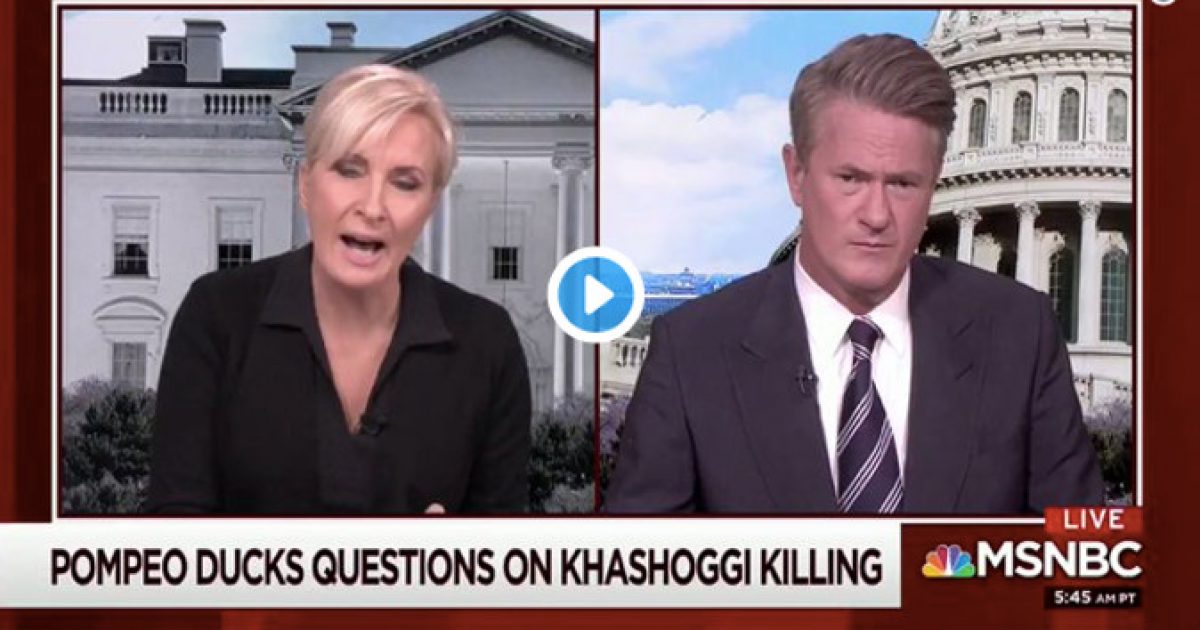 Mika Brzezinski, co-host of “Morning Joe,” recently conducted an interview with Democratic Sen. Dick Durbin where she unloaded on Secretary of State Mike Pompeo, calling him a nasty homophobic slur.

Brzezinski referred to Pompeo as a “wannabe dictator’s butt boy.” The comment earned her a lot of backlash, which prompted her to issue an apology. Oh, not to Pompeo though. That would be too much of an exercise in human decency.

Brzezinski made the slur while complaining about remarks Pompeo made on “Fox & Friends” about the murder of Jamal Khashoggi.

“Why doesn’t Mike Pompeo care right now?” Brzezinski asked. “Are the pathetic deflections that we just heard when he appeared on ‘Fox and Friends,’ is that a patriot speaking, or a wannabe dictator’s buttboy? I’m dead serious. I’m asking, are these the words of a patriot?”

MSNBC's Mika Brzezinski calls Secretary of State Mike Pompeo a homophobic slur: "But why doesn’t Mike Pompeo care right now? Are the pathetic deflections that we just heard when he appeared on Fox and Friends, is that a patriot speaking, or a wannabe dictator’s butt boy?" pic.twitter.com/1mSstloDqc

Following outrage that ensued online, Brzezinski apologized to Sen. Durbin, but not to the man she made the remark about.

“Totally agree with you -SUPER BAD choice of words,” Brzezinski tweeted. “I should have said ‘water boy’… like for football teams or something like that.. apologize to @SenatorDurbin too! SO SORRY!”

Totally agree with you -SUPER BAD choice of words .. I should have said “water boy”… like for football teams or something like that.. apologize to @SenatorDurbin too! SO SORRY! https://t.co/zIqsGdK3Tk

At the time of this writing MSNBC has not announced whether or not Brzezinski is going to face any sort of disciplinary measures for her poor choice of words.

Here are some of the reactions she received for her comment:

This is disgusting! How can @KevinHart4real essentially be forced to lose his Oscar’s gig for comments he made years ago as a comedian, but Mika can make a seriously homophobic slur on a major news station, have the network try to cover it up & its not an issue? Give me a break! https://t.co/dTaBMkJa7x

All employees in good standing at @nbc and @NBCNews

This "butt boy" comment could be problematic for Mika. Good news for her is that Colbert made similar comments some dubbed homophobic last year and no reprimand came. Smart money here is apology and no consequences. https://t.co/NSDGdkwnfW

If a conservative pundit used the term “butt boy” to refer to President Obama when he was in office, you can almost guarantee that dude would’ve been cleaning out his desk in a hot second.

Apparently it’s okay to be “homophobic” as long as you’re a Democrat and support the major tenets of the progressive belief system.

If you looked up the definition of the word “hypocrisy” in the dictionary, you’d see a gallery of photos featuring left-wing talking heads like Mika Brzezinski.