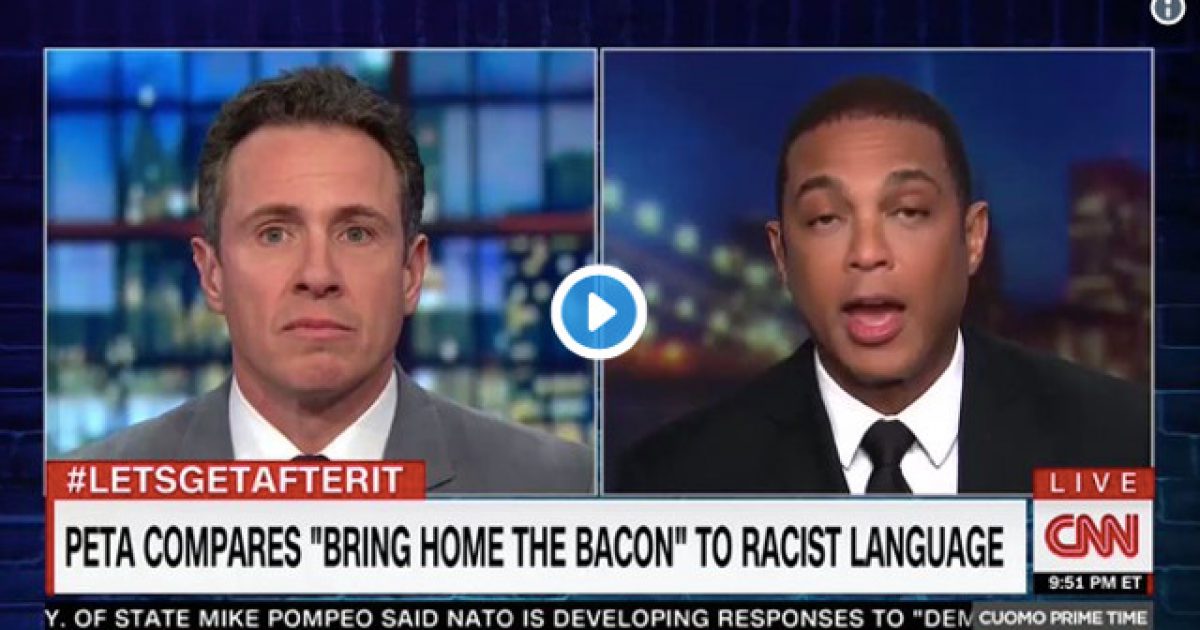 CNN host Don Lemon, a man who should be used to making a fool of himself at this point, really stuck his foot in his mouth when he used a sexual slur during an appearance he made on “Cuomo Prime Time.”

After using the slur in question, Lemon attempted to backpedal and pretend like he didn’t know what the term actually meant, but by then the damage was done.

The segment originally started out with Cuomo talking about PETA’s list of “anti-animal language” and then transitioned into talking about “more serious things.”

At the end of the segment, Lemon told Cuomo: “Don’t be a chickenhead.”

The term “chickenhead” is a slang derogatory term that is used to describe someone who likes performing oral sex on a man and is considered to be especially degrading toward women.

Lemon immediately walked his statement back, saying: “I don’t know what that means, I just said it. I have no idea.”

CNN's Don Lemon appears to use a sexual slur, tells Chris Cuomo: "Don't be a chickenhead"

Right after saying it he tries to walk it back: "I don't know what that means, I just said it. I have no idea" pic.twitter.com/Ed2xb3EzsX

This isn’t the first time Lemon has used an inappropriate sexual term on the air.

Back in 2014, during an interview with Joan Tarshis, one of Bill Cosby’s accusers, he said the following:

The allegations are hardly new, and the interview could have been an occasion for a serious and nuanced conversation about rape, about how survivors respond to and survive assault and about well-documented techniques used by serial abusers. Instead, what proceeded was appalling. Lemon, in a few brief lines, blamed the victim for not stopping her assault, while also managing to subtly convey a whole series of rape myths.

Lemon’s most repugnant suggestion was this: “You know, there are ways not to perform oral sex.” He went on to clarify that he meant the “using of the teeth” as a “weapon” to stop the alleged assault. Put crassly, “Why didn’t you bite his dick if you didn’t want to perform oral sex?” Lemon continued, “If you didn’t want to do it…” In other words, “you really wanted it.”

CNN's Don Lemon To Cosby Rape Accuser in 2014: "You know, there are ways not to perform oral sex if you didn't want to do it…[like] using of the teeth…" pic.twitter.com/44cpqdUqTe

So the question now is, why in the world hasn’t Lemon been fired for his crass remarks? If a conservative said similar things on the air, they’d be booted off so fast their head would spin.

Is this yet another case of someone on the left getting a pass from their own tribe, simply because they espouse the right ideology? Not sure what else it could be.

The way you know whether or not your belief system has merit is if you can fairly and equally apply it to all people, everywhere, including those in your own party. If you can’t, then what you’re saying is your principles are weak and need to be propped up by having a vast number of adherents to the worldview from which those principles flow.

Regardless, this is hypocrisy at its finest and is one reason among many not to trust the mainstream media.