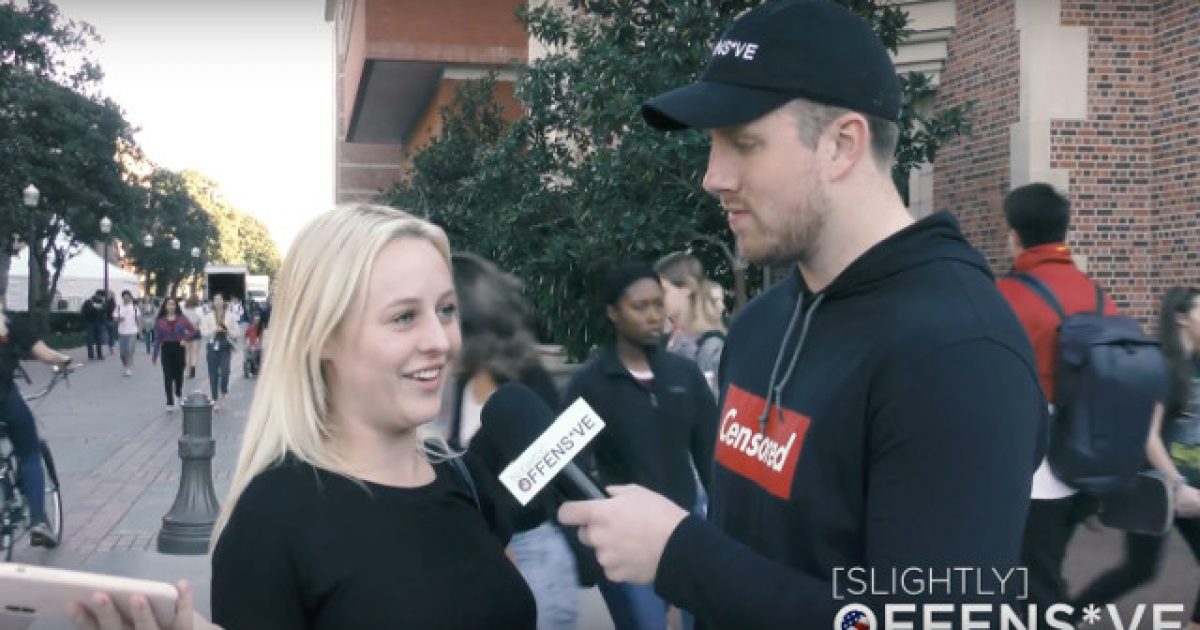 Elijah Schaffer of Slightly Offens*ve headed down to the University of Southern California to ask students whether or not they loved the United States of America.

The answers he received will leave you terrified for the future of this nation. This is proof positive that kids are being massively influenced by the progressive public school education they receive for the first twelve years of their lives.

Once they arrive in colleges like USC, they’ve already been brainwashed.

Here are some of their reactions:

“America is trash and I look forward to the day it burns down.”

When Schaffer asked who the “mfs” in the last statement were, the student answered without hesitation: “Donald Trump and his people. They full of s**t.”

In contrast, one female student answered that “Trump” makes this country great. She added, “People get angry when I speak out, but liberal people can speak out and they’re fine. It’s interesting.”

Asked what defines being an American, another student answered, “Not freedom.” She went on to define Americans as “Yee haw.”

“All those red states, uh, Republican, conservative, we’re trying to outvote them but it’s not really happening — until they die off,” she added.

If this doesn’t make you weep, your heart might just be three sizes to small. Not to mention you might not truly understand the gravity of what this means for the future of liberty not just here in America, but across the world.

This is yet another reason to oppose federal intervention into the public education system. These kids are being taught to hate their country by liberal educators in schools and the only solution is to remove the Department of Education from the equation and privatizing schools, giving parents more control over the values their children are taught.

Ultimately, it might be time for folks to start considering a mass exodus from the system, putting their kids into private schools or perhaps considering homeschooling. There are plenty of great online programs and curriculum that allows the bulk of teaching to be done in a way that isn’t as burdensome on parents as it was in former years.

This gives parents 100 percent control over the worldview being taught to their kids and is likely the only way to preserve freedom for future generations.