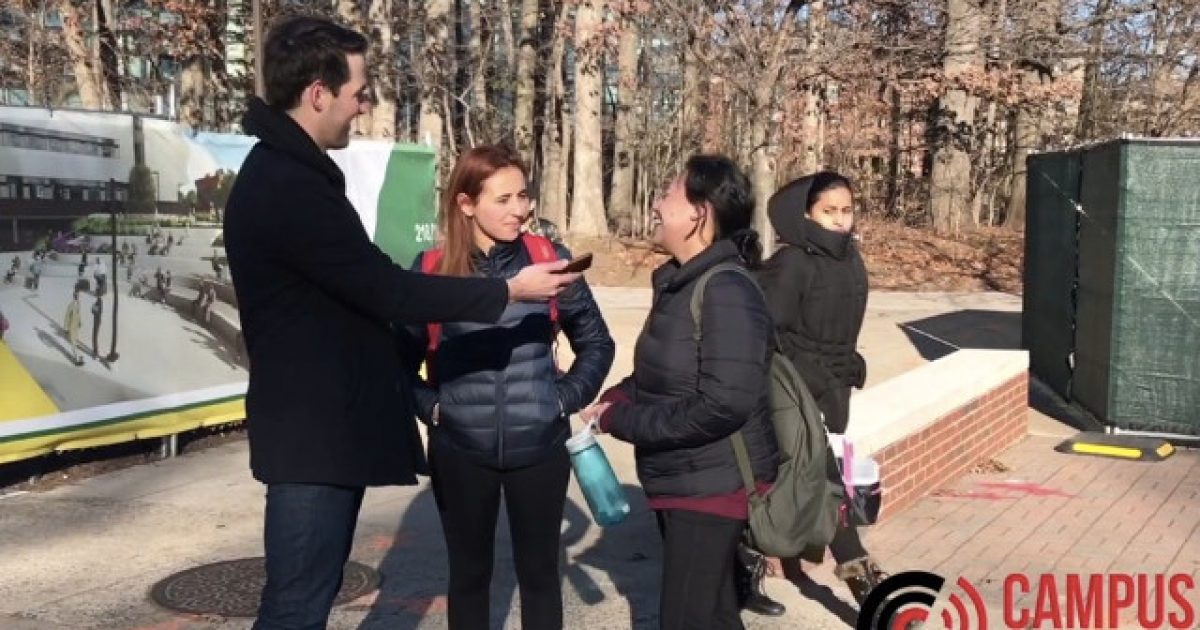 Cabot Phillips of Campus Reformed recently visited the campus of George Mason University in the northern part of Virginia where he asked students for their thoughts on the controversy surrounding the popular Christmas tune, “Baby, It’s Cold Outside.”

He specifically asked them if they supported the ban of the song over its lyrics and if they agreed they suggest a man seducing a woman against her will.

The responses he received were fairly mixed. Some of the more “woke” students were gung-ho about the ban while others believed the whole situation has been overblown.

Later in the interview, Phillips asked the students who were ready to ban “Baby, It’s Cold Outside” if they also believed that misogynistic rap tunes — as well as other forms of music — should also be banned for the same reason.

The hypocrisy is astounding.

A pair of female students who said “Baby, It’s Cold Outside” is “definitely” misogynistic and should be taken “off campus” sang a different tune when Phillips asked them if they would delete rap songs and tunes from other genres that demean women from their playlists.

“I don’t listen to rap,” one of the students replied.

The other hemmed and hawed amid a few nervous giggles before saying, “I definitely see that side. But, like, I don’t know. This sounds bad, but like, [“Baby, It’s Cold Outside”] only comes out once a year, like, that one time of the year whereas rap is kind of like all …”

She then began spinning her finger in a circle after which Phillips finished her sentence: “Problematic year round.”

“And so maybe it should be phased out a little bit more,” she continued, “but, like, I also listen to a lot of rap, so there’s that.”

Another student — a male — also had problems with “Baby, It’s Cold Outside,” telling Phillips it needs to be “adapted” for today’s “totally different cultural time” because some of it’s lyrics “are very suggestive” and that “you can definitely get a sort of vibe from the song that it’s just unacceptable.”

But when Phillips asked him about rap?

“With rap, it’s not acceptable,” the student replied cautiously, “but it’s kind of a different kind of lifestyle.”

Phillips pointed out, “So the misogyny [in rap] is a little more acceptable ’cause it’s not Christmastime.”

“Uhh,” the student responded, “it’s a very good way of pointing it out.”

There are two reasons for the hesitancy these kids have in applying their standards to rap music.

Number one, they’re actually fans of the music themselves, thus if they agree this kind of music needs to be banned, they are basically pointing the finger at themselves for liking a style of music that flies in the face of their own claimed value system.

The other reason should be fairly obvious. The vast majority of rap music is produced by young black men. If they come out against this kind of music and culture, they fear being labeled racist.

This proves to be quite a conundrum. On the one hand, by being inconsistent and not condemning the music, they’re saying it’s okay to be misogynistic. However, if they do condemn the music, they run the risk of appearing racist.

You know, when you’re a conservative who believes in freedom of speech, you don’t have this problem. You see, all these artists should have the right to say whatever the heck they want in their songs, and we as consumers can sort it all out in the free market.