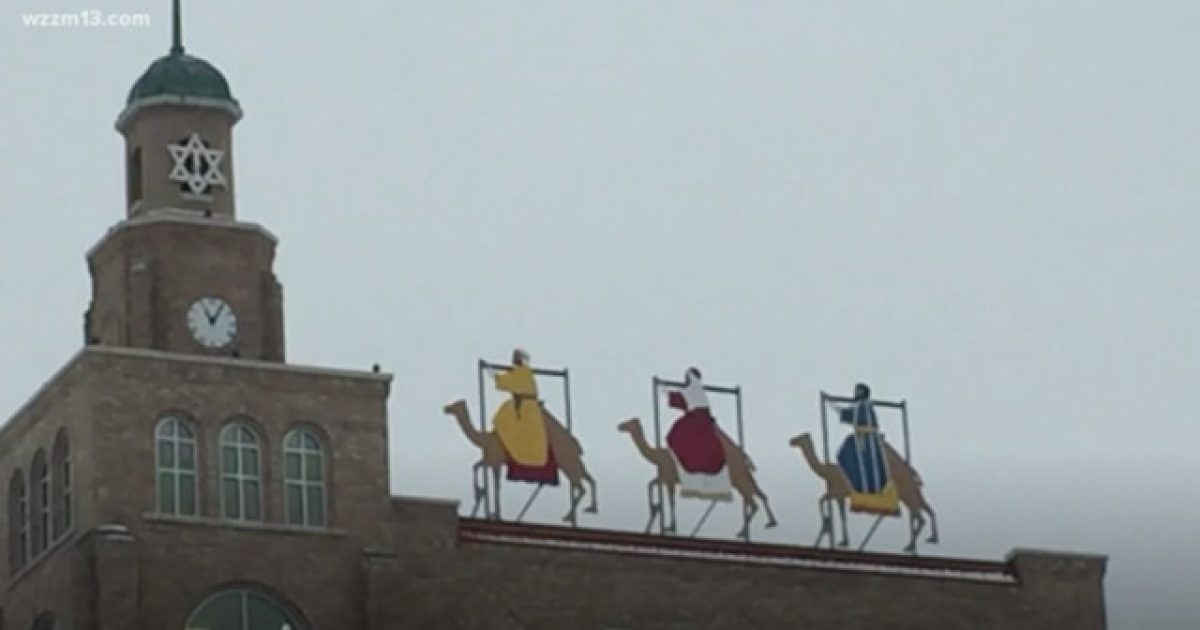 So you think the “War on Christmas” is a myth, huh? Well, in all honesty, the vast majority of the charges folks on the right bring up on this topic aren’t nearly as dramatic as they are hyped up to be.

However, that doesn’t mean no hostility toward the very Christian holiday does not exist. It very much does, which is a lesson the Newaygo Public School district is discovering the hard way.

The schools, which have three wisemen decorations and a Christmas star, are being ordered to take them down or else.

A state association involved in separation of church and state cases put the district on notice this week.

The issue and possible removal of the display is becoming the talk of Newaygo as residents prepare for Friday night’s Christmas walk. Residents say the display goes back more than 40 years.

“Here it’s a tradition,” said Stacie Johnson. “You can see it coming from White Cloud.”

Johnson and more than 2,000 others have signed an online petition asking the school district to leave the wise men and star in place.

“It clearly conveys the message of the Christian nativity,” said Mitch Kahle, with MACRA.

The association gets involved in separation of church and state issues around the state on behalf of local citizens.

“We were approached by a complainant from the area,” said Kahle.

The school district’s attorney is working with school leaders to formulate an appropriate response.

“And they have promised to get back to us by December 7th,” said Kahle.

“You have a public school that’s promoting the story of the Christian nativity and that’s not permitted under the Constitution,” he added.

If the display is forced to come down, supporters have already found a work around to ensure the decorations are still up near the north end of Newaygo. They have secured permission to use a piece of private property to put up the displays, thus avoiding future legal challenges.

It’s sad that so many liberals are so hostile to the traditions of this holiday season, one that has been declared a national holiday. Christmas is part of our heritage, one that is celebrated all around the world. You’d think, given its global nature, this would be something folks would be excited about.

And Christmas wouldn’t even be a thing if it weren’t for the celebration of Jesus Christ’s birth. So it makes no sense to eliminate displays like this that simply point to the reason for the season.