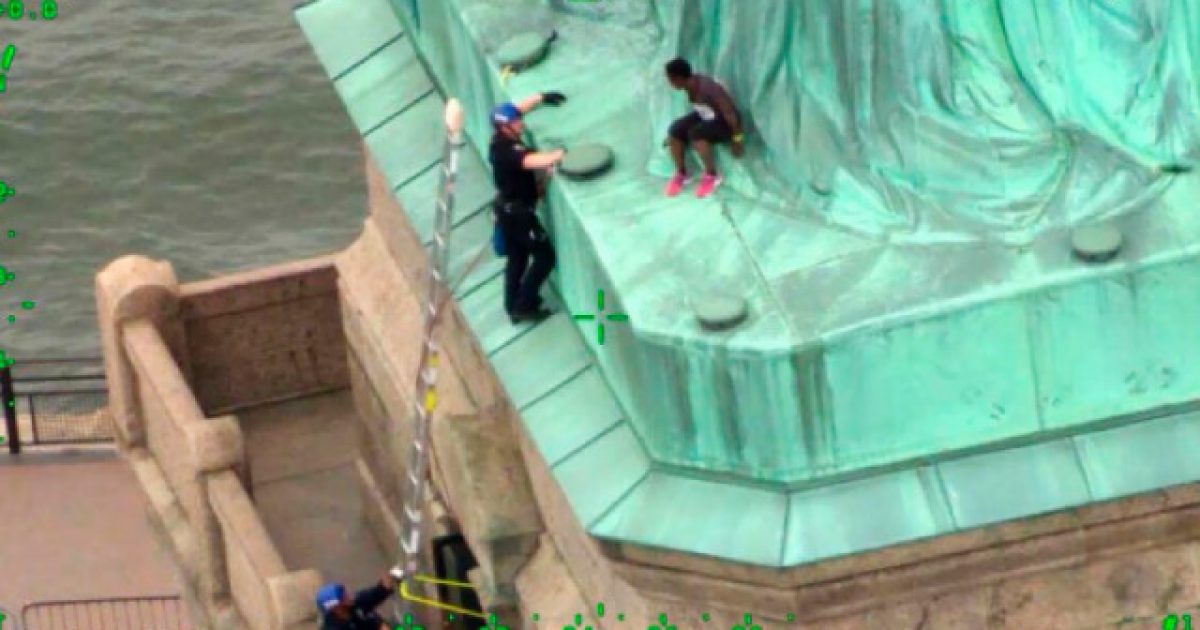 The woman who climbed the Statue of Liberty as a form of protest against U.S. immigration policy on July 4 of this year, a move that forced thousands of visitors to be evacuated from the island, learned her fate on Monday.

A judge in Manhattan found Therese Okoumou guilty on all counts. Hope that little act of activism was worth going to prison over.

Therese Okoumou, part of a group of roughly 40 protesters from the group Rise and Resist who were carrying a banner calling for the abolishment of Immigration and Customs Enforcement (ICE), ignored police requests to come down for four hours before two officers climbed up to the base and took her to a ladder where she climbed down 25 feet to the monument’s observation point, where she was taken into custody.

But on Monday, Judge Gabriel Gorenstein on found Okoumou guilty of trespassing, disorderly conduct and interfering with government functions; those convictions could put her in jail for up to 18 months.

The New York Post reported, “Okoumou, 44, came to court in a blue outfit littered with statements protesting Trump’s immigration policies, including ‘No human is illegal on stolen land.’”

Gorenstein dismissed Okoumou’s claims that she should be set free because scaling the wall was a protest of President’s Trump’s immigration policies and was an act of conscience. Gorenstein quoted Sir Thomas More’s monologue from the play “A Man For All Seasons” about breaking laws in order to deal confront the devil, stating, “And when the last law was down, and the Devil turned round on you — where would you hide?” The judge continued, “I think the defendant’s lawyers know that if I took them up on that invitation, none of us is protected by the law.”

The prosecutor pointed out that Okoumou endangered not only herself, but NYPD cops who rescued her and thousands of visitors to the island. One of her rescuers, Detective Brian Glacken of the NYPD’s elite emergency services unit, detailed for the judge what he and his team endured in order to rescue Okomou, saying it was “difficult due to the fact that there were not a lot of places to hold on to or hang on to.” A video showed Glacken leading other rescuers as they carefully made their way along a perilous ledge by the statue’s feet, tethered to ropes at the time. Glacken said of the ropes, “With my weight, it’d probably snap and slow me down for a second before hitting the ground.”

Glacken also informed the judge that the reason he wasn’t standing on the ladder near him was because Okoumou said she would push his ladder down. He said, “I talked to her about my life. I told her I have a wife and she probably wouldn’t be happy to know I was up here right now.”

Michael Avenatti, who served as an advisor to Okoumou, blustered, “The verdict today was not surprising in light of the letter of the law but sometimes you have to stand on principle. The Trump administration’s draconian polices of separating children from parents, stripping children from mothers, has no place in any civilized society on earth, never mind on any American soil.”

JUST IN: Woman who scaled base of Statue of Liberty detained by authorities, led back down after several-hour standoff. https://t.co/VQbxWDci6R pic.twitter.com/Y18NBIxJ96

One of the beautiful things about America is that if you have a grievance against the way the government is doing things, you can protest and allow your voice to be heard and raise awareness for other citizens across the country.

However, while we have the right to freedom of speech and freedom of assembly, there are still rules and laws in place to ensure that while we exercise our right to share our beliefs, we do so in a way that is safe for everyone.

This woman violated those rules and is now paying the price for it. What’s happening to her is completely just. Her form of protest was dangerous to herself and to others. It was a complete inconvenience to those who showed up to the island to see the sights.

There’s a right way and a wrong way to make your voice heard. This was most definitely the wrong way. Hopefully others will learn from her poor choices.

A List of the Media’s Biggest Fake News Stories During the Trump Years
January 20th, 2021 The Mental Recession

President Biden Makes A Call For The End To ‘Uncivil War’
January 20th, 2021 The Political Cowboy