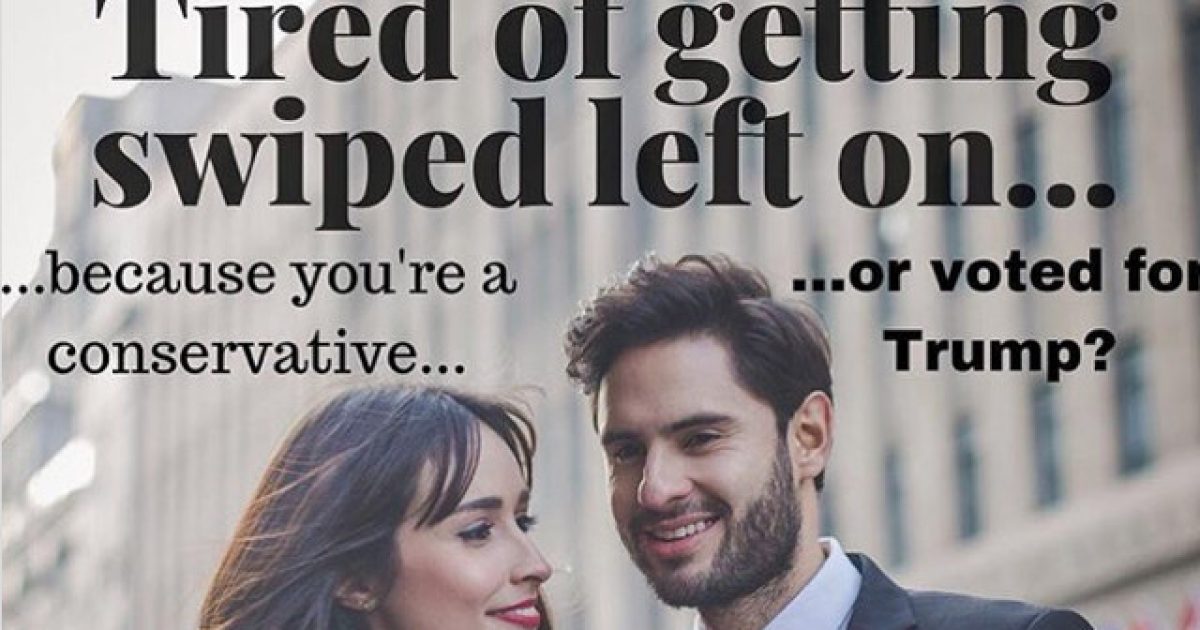 It seems the way most couples meet each other these days is through online dating sites, which totally makes sense because it gives folks an opportunity to connect with like-minded individuals they actually have things in common with.

Well, a new conservative dating network is popping up on the scene, due to launch later this month, and boy is it ever going to make progressive heads explode.

Designed for those who have found themselves rejected by other dating sites for their pro-Trump views, the creators of “Righter” have made clear that it’s a “zero tolerance” zone when it comes to liberals. In fact, Trump critics who try to use the site might end up having to deal with Righter’s legal team.

The Daily Beast’s Will Sommer provides a rather entertaining introduction to the new dating site that takes some clear shots at the unapologetically exclusive app but also highlights its appeal to those sick of the way pro-Trumpers are treated on other platforms.

Lawton says the idea for the company began at a Manhattan party in which a beautiful woman told her she couldn’t get a date because she supported Trump. “That encounter at the party—and the now-infamous incident where a Virginia restaurant refused to serve White House press secretary Sarah Huckabee Sanders—inspired her to start Righter, a dating network that caters to Trump supporters who have been rejected on more mainstream dating apps over their political beliefs,” writes Sommer.

And there’s a market for it, says Lawton, whose staff has tested pro-Trump profiles on various apps and repeatedly found them rejected outright. They even found that Tinder users would “super-like” some profiles, which costs them money, but reject them once they found that they liked Trump. In response, the company is emphatically pitching the network to those on the Right who have been “swiped left on” too many times:

Now, what many of you reading about Righter are probably thinking right now is that sooner or later a bunch of leftists will try to infiltrate the site and cause problems for legitimate users of the network. Have no fear. Lawton already has that angle covered.

“I have a very nice legal team that will be handling that,” Lawton told the Daily Beast. “This is zero tolerance.” Asked if threatening to sue liberals who use the pro-Trump-only network is a bit extreme, Lawton replied, “Bring it on. This is ridiculous. They’re sitting here suing our president.”

Along with its overtly, and potentially legally enforced “zero tolerance” nature, the new network contains some other notable rules, Sommer notes: Men must pay for the first date; photoshopped images making you look better than you actually do are forbidden; military get free access; men initiate the contact; and no illegal immigrants, or at least that’s what one Instagram post suggests:

You can hear the collective screams of liberal feminists all over the country as they lose their minds over the old-fashioned idea of a man paying for the first date.

At the end of the day, this is probably a smart idea. There are a lot of conservative folks who are looking for new ways to connect with others who believe the same things they do, whether that’s in a romantic capacity or not. Righter is looking to serve that particular need in the marketplace.

They’re also brilliantly using President Trump and his current popularity to market their service to their target audience, and they’re doing it perfectly. We’ll have to wait and see if the site takes off, but it certainly looks intriguing.