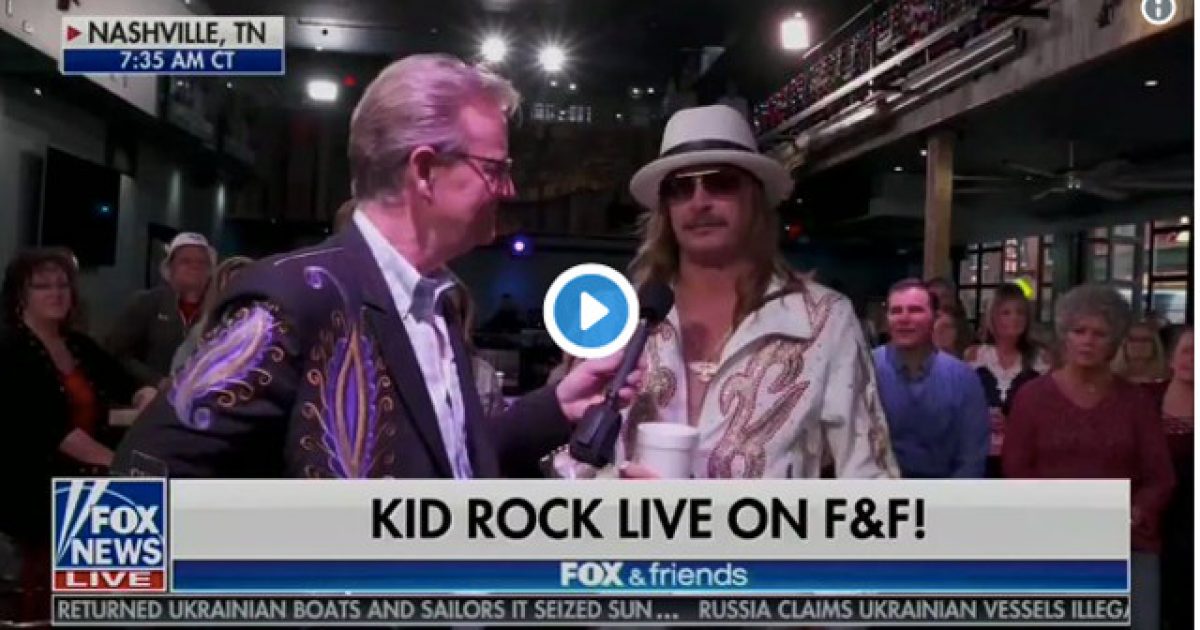 Steve Doocy, co-host of “Fox & Friends,” paid a visit to Kid Rock’s Big Ass Honky Tonk Rock & Roll Steakhouse on Friday of last week, where the rocker made some not-so-politically correct statements about co-host of “The View” Joy Behar.

The comments resulted in him being fired as Grand Marshal of the 65th Nashville Christmas Parade. He then teased that he might crash the parade in response. Check it out.

The line that prompted the meltdown was delivered by Rock during his mini-rant on the problem of political correctness in American discourse.

“We can disagree and still be cordial with one another,” said Rock, real name Robert Ritchie. “God forbid you say something a little bit wrong; you’re racist, homophobic, Islamophobic, this that and the other. People need to calm down, get a little less politically correct, and I would say, love everybody — except, I’d say screw that Joy Behar b****.”

“No, now, you can’t—” a flustered Doocy said, while the audience behind the two exploded in cheers. “You cannot say that,” said Doocy, gathering himself, but not able to resist laughing. “We apologize for that.”

“She’s just got a different point of view than you do,” suggested Doocy.

“Exactly,” said Ritchie. “You know maybe we’ll go on and I’ll hash it out with her and we’ll talk about it. But exactly, aside from joking, which I was, just go out and hash it out with people and have your thoughts and ideas, but be able to still go have a beer with somebody and say, hey, we all love this country and let’s have different ideas but try to move forward and be more together and realize, at the end of the day, we’re all Americans.”

Rock’s shot at Behar was a response to her criticism of his visit to the White House, along with Sarah Palin and Ted Nugent, which she said was “the saddest day in the history of the White House since the British burned it to the ground in 1814.″

The predictable backlash was swift and strong: Nashville Mayor David Briley announced that he was “inclined not to participate” in the parade if the Behar-insulting Ritchie headlined the event. “When you have the grand marshal of what’s labeled Nashville’s Christmas parade saying hateful things on national television, the mayor obviously does not want to be included in an event with someone like that,” Briley’s spokesman told AP.

Within hours of Rock’s comments, organizers of the parade announced that they were looking to replace Ritchie with the “Waffle House hero,” James Shaw, Jr.

“Parade organizers feel that the Grand Marshal should personify the spirit of the Nashville community and have invited James Shaw, Jr., who became a community hero after stopping a shooting at a local Waffle House earlier this year, to be honored,” the event sponsors said in a statement published by the Tennessean.

Variety reported that an attorney representing Rock’s business partner and close friend Steve Smith, the majority sponsor of the event, stated the rocker was going to show up to the parade anyhow, saying it was going to be like a “standoff at high noon.”

As it turns out, Rock decided to go ahead and attend the parade and enjoy the day with his family, saying “Well folks, it is official . . . My parade has been rained on!” he wrote Saturday. “But in the end, it is not about me. It is about the kids and the wonderful work they do at Vanderbilt Children’s Hospital. Either way, myself, family and especially my granddaughter, are gonna enjoy today.”

Well folks, it is official…My parade has been rained on! But in the end, it is not about me. It is about the kids and the wonderful work they do at Vanderbilt Children’s Hospital. Either way, myself, family and especially my granddaughter, are gonna enjoy today. Sending well wishes for a break in the rain and a successful parade. I love Nashville and the people she holds. But remember…Rock n Roll Never Forgets!! Robert Ritchie / Kid Rock

Joy Behar ended up responding to the line Kid Rock delivered on “Fox & Friends” by inviting the rockstar to come on “The View” and have a beer.

Seeing Joy Behar debating Kid Rock on politics might be the most entertaining segment of “The View” in its program history, making it the first and last time a vast majority of conservatives would actually tune in to watch.

If they want to boost some ratings, perhaps they ought to really make this happen.