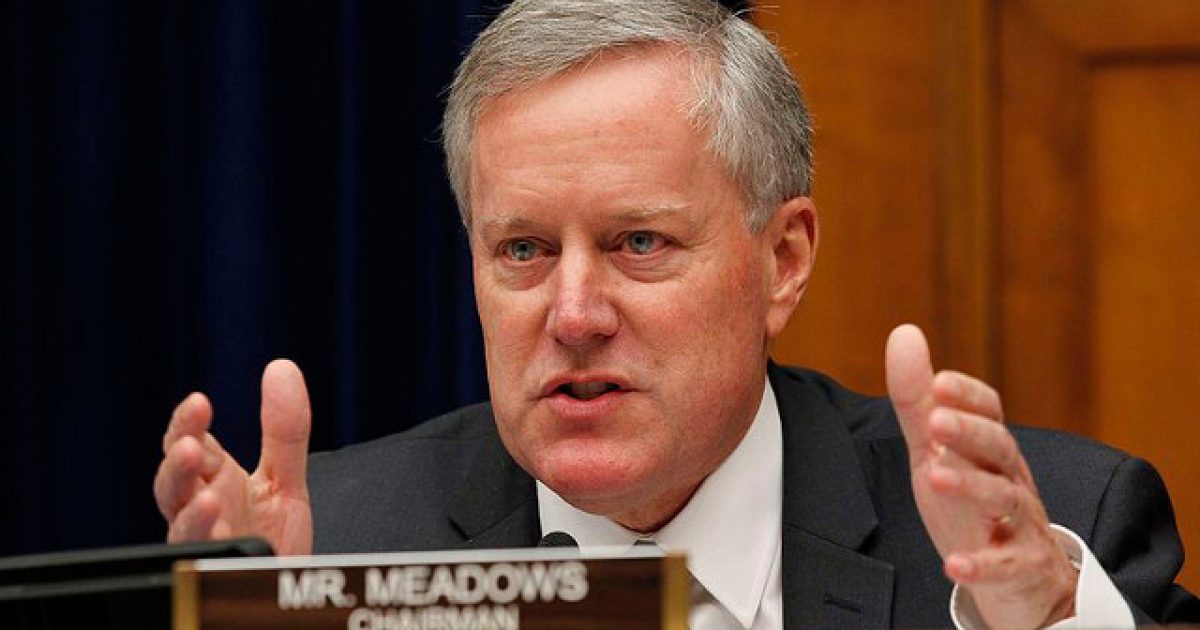 With the departure of Chief-Of-Staff John Kelly, President Trump is on the hunt for someone fresh to take his place. Someone who might help reenergize his base and make an even better connection with diehard conservatives across the country.

Someone like chairman of the House Freedom Caucus Rep. Mark Meadows. A new report is indicating that there’s a really good chance Meadows might be the guy Trump picks to fill this critical position in his administration.

Meadows would like the job; he said in a statement, according to Politico, “Serving as Chief of Staff would be an incredible honor. The President has a long list of qualified candidates and I know he’ll make the best selection for his administration and for the country.” Politico notes that Meadows and Rep. Jim Jordan (R-OH), his closest friend in Congress, have championed Trump’s cause by initiating counter-investigations of the FBI and how the bureau has conducted the Russia investigation. Jordan said of Meadows, “I think he’d be great. Mark understands how Capitol Hill works. He’s a smart guy. This decision is between the president and Mark, but I think he’d do an outstanding job.”

One White House official told Politico, “He’d have a keen sense of what to do, what groups to engage with, what events to hold, going into a hyperpolitical time. He also knows oversight better than most. Going into a Democratic House takeover, he would know tools Republicans have at their disposal to push back on Democrats better than anyone.”

Meadows has his supporters in Congress, among them, Rep. Matt Gaetz (R-FL), who stated, “Meadows understands the oversight process, the media and how to pick fights we can win,” adding he’s doing “all I can to encourage the president to pick him … I lobbied the president the best way I know how. I made the Meadows case on Fox News.” Gaetz said on Fox News, “It’s one of the reasons I think President Trump needs to pick Mark Meadows to be his chief of staff, because Mark fully understands the facts and the timeline and will make sure the White House is prepared to go toe-to-toe with a far more politically engaged James Comey,”

Rep. Scott DesJarlais, a member of the Freedom Caucus from Tennessee, sang the praises of Meadows, noting that he “has strong conservative principles; he’s dedicated to the agenda that helped to elect Donald Trump. He also sees the attacks against the president for what they are: entirely partisan and dangerous to our Constitution and democracy. Donald Trump deserves a chief of staff who can defend him in public and organize the White House effectively to achieve the American people’s goals, including safe and secure borders and a growing economy.”

Meadows played an important role in helping the president’s tax reform bill get passed. Back in September he joined forces with Rep. Rodney Davis to introduce the Protecting Family and Small Business Tax Cuts Act, a piece of legislation designed to take the individual tax cuts that make up the Tax Cuts and Jobs Act and make them permanent.

Another plus in the column for Meadows is that he is pro-life, a supporter of the Second Amendment, understands the importance of having a free-market health care system, supports Israel, and has fought on behalf of persecuted Christians across the globe.

It certainly seems that if the president is going to pick someone to replace John Kelly, Meadows is the right guy for the job. Let’s hope that’s who gets the position.