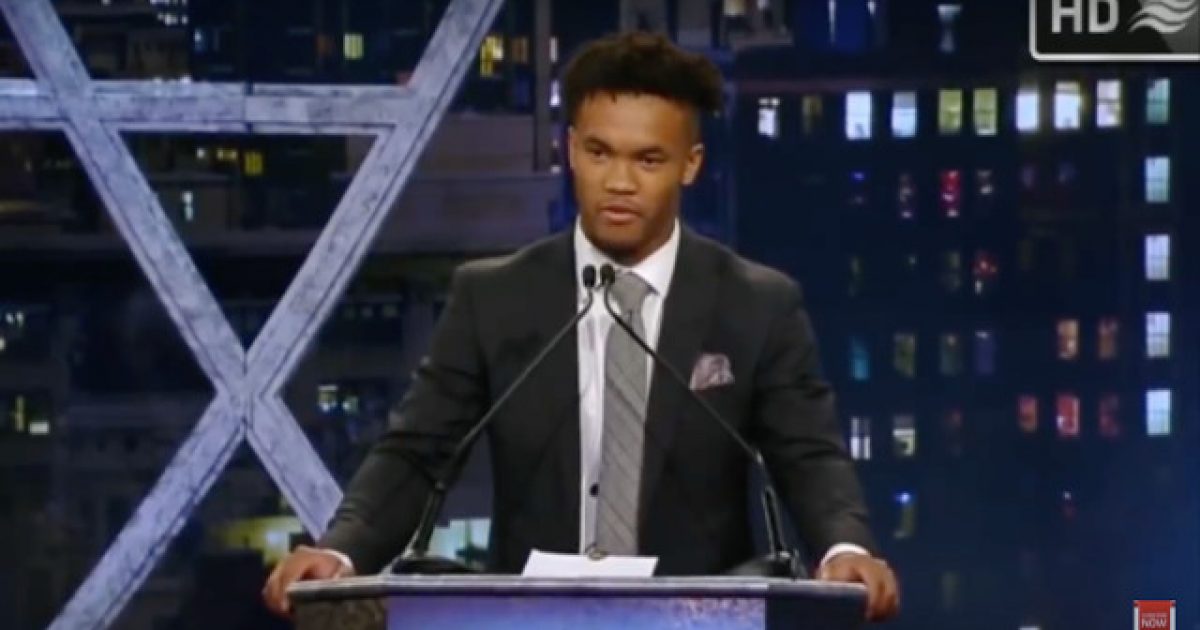 We now live in a day and age where anything you say, can and will be used against you in the court of public opinion. Especially if it’s something you posted on social media.

Take comedian Kevin Hart for example. Hart was tapped to host the Oscars, but then some folks dug up some jokes he cracked about homosexuality and then “poof!” The hosting gig went up in smoke. Gone. Erased. A victim of Thanos’ infinity gauntlet snap.

The latest target of digital witch hunting is Heisman winner, Kyle Murray, the stellar quarterback from Oklahoma. A new hit piece by blogger Scott Gleeson smashes on Murray over some tweets he made when he was 14-years-old.

Let’s just say the response from the public has not been favorable to Gleeson.

Gleeson wrote an article shaming Murray immediately after he won college football’s top individual award, over some tweets that he wrote when he was as young as 14-years-old.

“But the Oklahoma quarterback’s memorable night also helped resurface social media’s memory of several homophobic tweets more than six years old,” Gleeson wrote. “When Murray was 15 years old, he tweeted at his friends (via his since-verified Twitter account) using an anti-gay slur to defame them.”

Gleeson later updated his piece to include Murray’s apology, claiming that the star quarterback “took accountability” after Gleeson’s hit piece on him.

The backlash to Gleeson’s absurd piece exploded on Sunday morning, with tens of thousands of people expressing outrage over the fact that this blogger decided to attack a young man during one of the greatest moments of his life over comments he made years prior when he was 14. On the initial tweet from USA Today alone, more than 6,900 people commented on it with nearly all the comments disapproving of the article.

Here are some of the top responses to Gleeson’s article that got the most traction on social media:

"Old" as in said Heisman trophy winner was 15 at the time. The tweets are offensive but dredging up this stuff from when he was a kid is also right up there… https://t.co/fyW16DzrA6

You're part of the problem @USATODAY https://t.co/gb0OCbMWUI

This is why people are getting tired of the media. A long time ago, a young teen made fun of his friends (yes was joke insensitive – most teens have said worse)… now when he begins to succeed in life, they try to ruin him. FU!!!!! https://t.co/huiXHEroib

Stop looking for things to offend you, you miserable trolls! He was a 15-year-old kid! https://t.co/S5HFzP73At

You guys really sat on some stupid tweets from when a kid was 14 years old, waiting to post them minutes after he won his Heisman six years later? That's disgusting, man. https://t.co/bnPOh6ZTzR

As of early Sunday morning @USATODAY reminds us that the media is active and offensive. https://t.co/YcHMnIoOYA

This is bullying.
Stand up to the bullying. https://t.co/v8kjIxiX8y

Oh, for Pete's sake, you fucking vultures. Journalism. He was 15 years old. Fuck off, @USATODAY . https://t.co/c2XCRVUydL

Can someone organize a boycott of USA Today?

Who are these insufferable adults reporting out what @TheKylerMurray and other people are saying in their teens or even five years ago? No wonder so many people are miserable these days. Newsflash: humans do and say stupid stuff. End of story. https://t.co/w3S1IONIKt

If you’re black and still aligned with the Left, look at what they did to Kyler Murray and Kevin Hart last three days and ask yourself why? Pretty obvious you’re in the back of the intersectionality bus.

Kyler Murray just had the greatest moment in his life and you guys want to ruin it with a stupid tweet you dug up from when he was FIFTEEN YEARS OLD?! If you want people to not hate you, stop doing things like this. There’s no low mainstream media won’t dive down to for clicks. https://t.co/j03Lp7g8VW

And that’s just the beginning. There are an astounding number of individuals who are — rightly — ticked off about the treatment that Murray has received at the hands of LGBTQ activists — look at that ridiculous acronym. Seems like it grows by a new letter every week — who are voicing their support for the budding young quarterback.

The left actually combs through folks’ Twitter feeds looking for something they can start trouble with and then publishes the junk all over the place whenever that person hits the spotlight, just so they can milk some extra “woke” points from the left.

How pathetic and desperate does that look? Unbelievable.