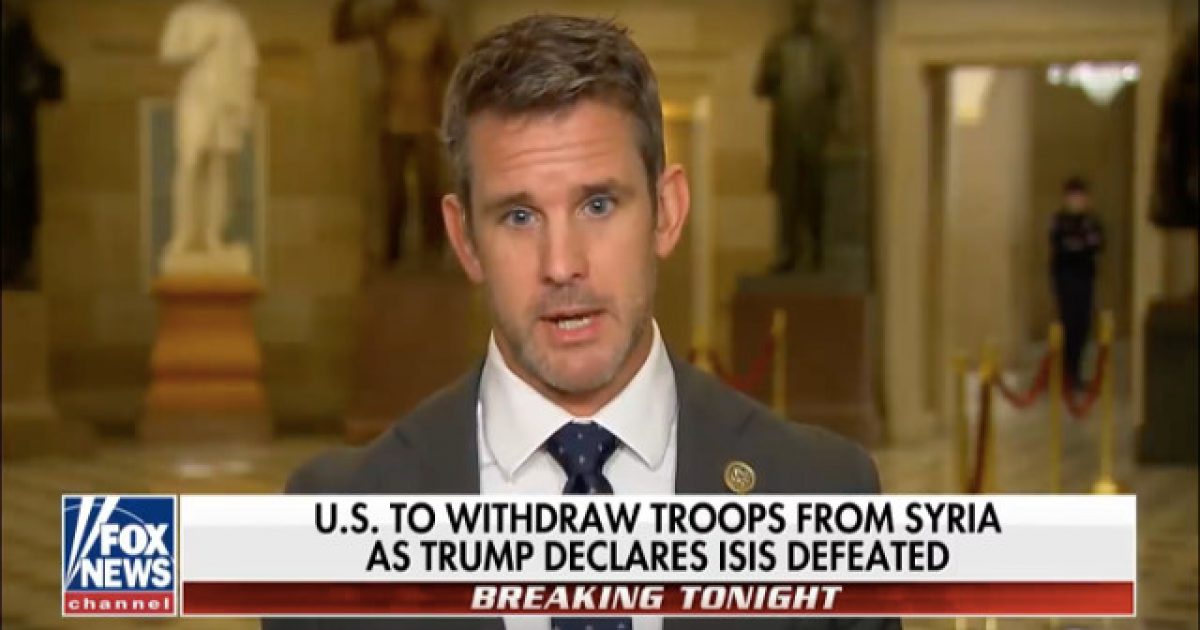 Kinzinger, a member of the Foreign Affairs Committee, went on in the interview to compare Trump’s decision to pull out to Obama pulling troops out of Iraq, a move that ended up paving the way for ISIS to rise in power. He also slammed Trump for saying that ISIS has been defeated.

“I feel eerily similar to that now, this is very disappointing, I have no idea where this came from, and I deeply deeply fear the long term ramifications of this,” he said.

MacCallum added that the announcement was good news for Turkey’s president Erdogan and Russian president Vladimir Putin, but bad for Israel.

“Why does it feel like out of the blue this morning did the president woke up and decide that victory had been established?” asked MacCallum.

“I don’t know, obviously he had a discussion with the president of Turkey,” replied Kinzinger. “Made a decision, I think on the basis of that, that’s what it seems like.”

“That can’t bode well for the Kurds, by the way, who have fought with us for a very long time,” he explained.

“I have no idea what went into this,” he added.

Kinzinger continued on to say that ISIS will be able to recruit more terrorists if the president implements his decision to pull troops out of Syria.

“This is going to be a huge boon for recruiting ISIS in the future,” he said.

“I implore the president to reconsider this,” he concluded.

President Trump seemingly confirmed the decision to remove troops from the area in a post on Twitter.

We have defeated ISIS in Syria, my only reason for being there during the Trump Presidency.

There are reports floating around out there that the State Department was taken off guard by the decision from the White House, but that hasn’t been confirmed as of this writing.

There’s little doubt that this is one of the worst decisions the president has made since taking the Oath of Office in January of 2017.

By removing troops from Syria, Trump is providing Iran with an opportunity to go through the country to get to Israel. Not to mention how much of a betrayal this is to the Kurds in the area, who we promised to support.

There are times when President Trump is absolutely brilliant in the decisions he makes, especially on the geopolitical stage, and then there are times that you sort of get the idea he doesn’t have a clue what he’s doing and is just making things up as he goes along.

This particular decision falls into the latter category.