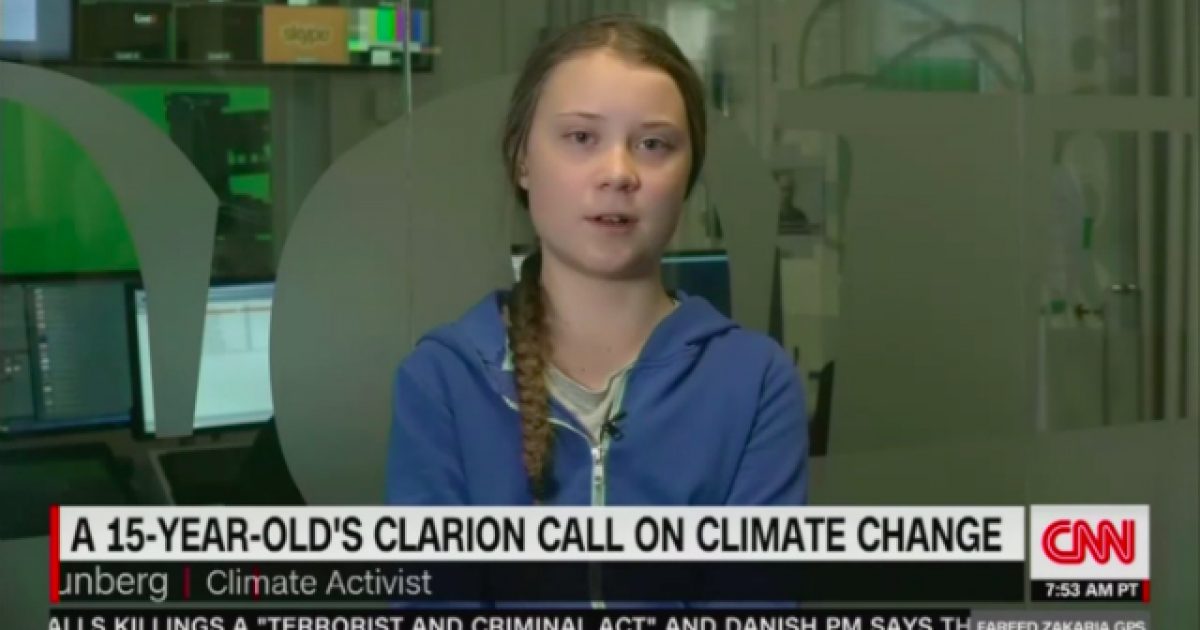 Over the weekend, CNN host Fareed Zakaria, clearly a hard-hitting journalist on a mission in pursuit of truth where ever the facts may lead, decided to use his vast connections to interview a leading expert in the area of climate change.

Zakaria interviewed Greta Thunberg, Sweden, after she rose to popularity for ditching school for three weeks to make her voice heard about the dangers being posed by climate change, stating it’s the “biggest crisis humanity has ever faced.”

Sorry, folks, but the mockery sort of naturally oozes out of something as ridiculous as this. CNN must truly be getting desperate for higher ratings.

Zakaria introduced Thunberg as a girl who had spoken at the annual COP24 conference in Poland, adding that she “has decided to make it her life’s mission to save the world from climate change.” He played a video of her, claiming she “spoke truth to power” at the convention.

Zakaria began his interview with her by asking, “What made you decide that this was going to be the thing you wanted to do? Have you always been looking for some cause, did you always feel like you wanted to make a difference in the world or is it that climate change just strikes you as so big that you felt moved by that?”

Thunberg, who came off as extremely earnest and not cynical, responded, “Yes, I mean the climate crisis the biggest crisis humanity has ever faced and if we don’t do anything right now, we’re screwed. And then I thought that I want to be able to when I grow up to look back and say I did what I could back then. It is my moral duty to do what I can and then I just decided to do it because there’s nothing I have to lose.”

Zakaria continued, “And you’re not just talking about it but as we say here in the United States also, ‘You’re walking the walk.’ You have changed your life and your lifestyle to try to have as low an impact as you can both in terms of climate and sustainability. Outline some of those measures.”

Zakaria stressed, “So we’re coming up on Christmas and New Year and you’re gonna get any new any new things as gifts?”

Thunberg, seriously, “No. Not me, my parents, they don’t get me many presents because I don’t any presents.”

Zakaria then gave the young girl a chance to lecture adults, saying, “Greta, what would you say to people, particularly in places like the United States. What’s your message to the adults in the room, as it were?”

Thunberg concluded with a paean that would have done any leftist proud, climaxing with an appeal to anger as a call to action:

My message to the people in general is that we have to understand the emergency of this situation and we need to realize that our political leaders have failed us and that we must our voices heard and to put pressure on the people in power and say to them that we’re not going to allow this to continue any more. And we young people need to say that we must hold the older generations accountable for the mess they have created and expects us to live with. And say to them that we cannot continue risking our future like this. And so, we need to get angry and then we need to transform that anger into action.

This young lady has been brainwashed by the socialistic principles being forced down her intellectual gullet in school and by the mass media around the world. It’s terrifying to think this girl is the future of the country.

One has to wonder if young people will one day wake up and understand why the causes they support today, more often than not, are not actual problems. They’re just a means to an end from a government that desperately seeks to consolidate more power for itself.

Let’s hope the “great awakening” happens sooner rather than later.