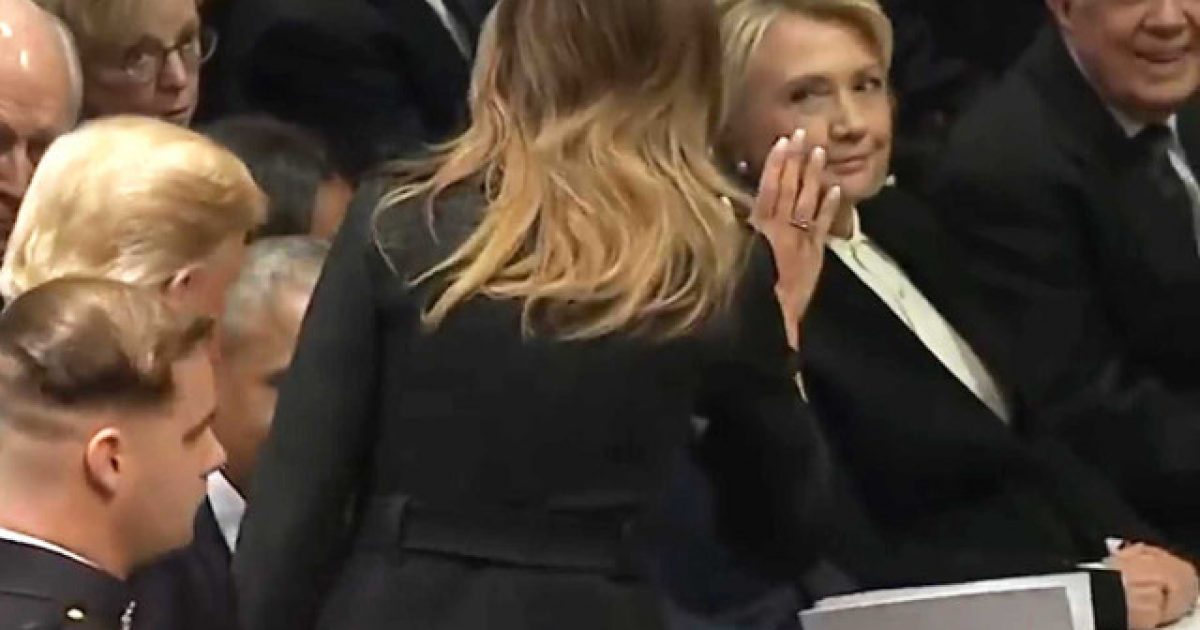 Hillary Clinton, a former First Lady and two-time failed Democratic presidential candidate, proved beyond a shadow of a doubt on Wednesday that she does not possess an ounce of class or poise.

Clinton, along with hubby Bill, the Obamas, and the Trumps, was in attendance at the funeral of former President George H.W. Bush, where she decided to snub First Lady Melania by refusing to shake her hand or even wave at her.

Bitter to the end.

All the former Presidents and their wives either shake Melania Trump's hand or give her a friendly wave except for Hillary Clinton who gives her an awkward nod. pic.twitter.com/1yMfOA42GC

Many on Twitter commented that Hillary’s actions at the funeral were rude and classless:

Poor dumb Roland thinks this makes Hillary look dignified instead of confirming what a cold nasty person she is https://t.co/2VZttTR1v0

Hillary’s behavior today at the funeral is exactly why America rejected her two years ago.

What an image. An awkward moment for sure, as Hillary Clinton nodded toward Melania Trump. Some cold stares, but also remarkable that an event can bring this group of people together, at least physically. pic.twitter.com/PY1vOb55pZ

This was really awkward and absolutely, totally ungracious. It’s easy to understand being disappointed at not achieving a goal you had set out for yourself, but when you allow that “failure” to define who you are as a person and let it influence the manner in which you respond to others, you’ve crossed a line.

It’s been two years, Mrs. Clinton. It’s time to get over it.

Also, this was a funeral to honor the legacy of a great man and former president. This was not the time for such displays of bitterness. Surely all of the hostilities could be set aside for one day.

The Obamas were able to do it.

This is just one more reason why we should be thankful Hillary didn’t get the job back in 2016.