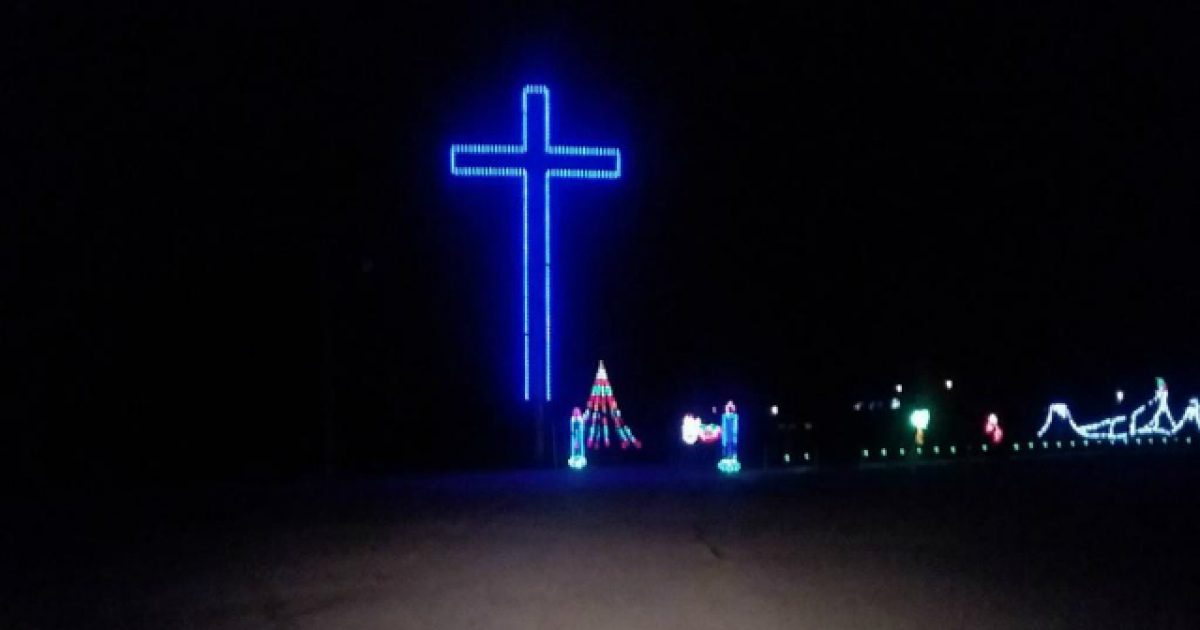 A lighted cross has been a regular staple of the Finley River Park holiday display in the city of Ozark, Missouri for the last two decades. But all that came to an end when an angry atheist decided that such a display greatly offended her delicate sensibilities and complained to the city, eventually forcing them to move it.

The residents of Ozark, however, do not share this woman’s point of view and are making their voices heard.

Well, yet another “concerned city resident” didn’t like that very much and got in touch with the Freedom From Religion Foundation — a national atheist activist group that fights and threatens lawsuits over such displays — and the FFRF sent Ozark a letter demanding the cross’ removal, the Springfield News-Leader reported.

Ozark city officials sent out a news release early Tuesday afternoon announcing the cross would come down, the paper said.

“It is the position of the City of Ozark that leaving a religious symbol on public property, in this case a cross, will result in a lawsuit that we will not win as the other communities throughout the U.S. and our own region have tried this and lost,” the release said.

But it seems the Ozark community wasn’t on board at all with the city caving to the Freedom From Religion Foundation.

Ozark Mayor Rick Gardner noted on his Facebook campaign page that he had received possibly “hundreds” of phone calls, texts, and other messages from local folks, the News-Leader reported.

“Everybody wants it up. One lady is crying. This is part of Ozark. This is Christian County, for Pete’s sake,” Gardner said.

Gardner added that “the cross is NOT down and will be lighted tonight. We have heard your thoughts and agree with them. We are now assessing all our options for addressing this situation. Stay tuned,” the paper said.

Later on Tuesday afternoon, the city reversed course and decided to work through the legalities of the whole situation, stating that the cross was going to remain in the park, it’s current location for the last two decades, due in large part to the outpouring of citizens in the community.

The Freedom From Religion Foundation is, of course, still throwing a temper tantrum and plans on continuing to press for the city to move the cross, viewing it’s current location as a violation of the Constitution.

This, again, is the ignorance of history and original intent that the radical left — and angry atheists in particular — express when it comes to their understanding of “the separation of church and state.”

The very concept is not at all named in the Constitution. It’s only mention is in letters from Thomas Jefferson to the Danbury Baptists and is addressing how the federal government cannot have an official church denomination. Nowhere is it implied that a person’s religion, including Christianity, cannot inform the way they govern.

Not only that, but if you take a peek at state constitutions from back in the day, many of them had official denominations of the Christian church, which is perfectly allowable at the state level, just not federally.

To put it simply, these folks have one agenda. Ridding the world of Christianity and turning everyone into secular humanists. These folks are religious too, whether they admit it or not. Humanism is their religion. They proselytize all the time and attempt to use aggressive evangelical methods to try and create new disciples of their faith.

Hopefully, the city of Ozark will remain strong and stand on principle, truly representing the will of the people in their city.