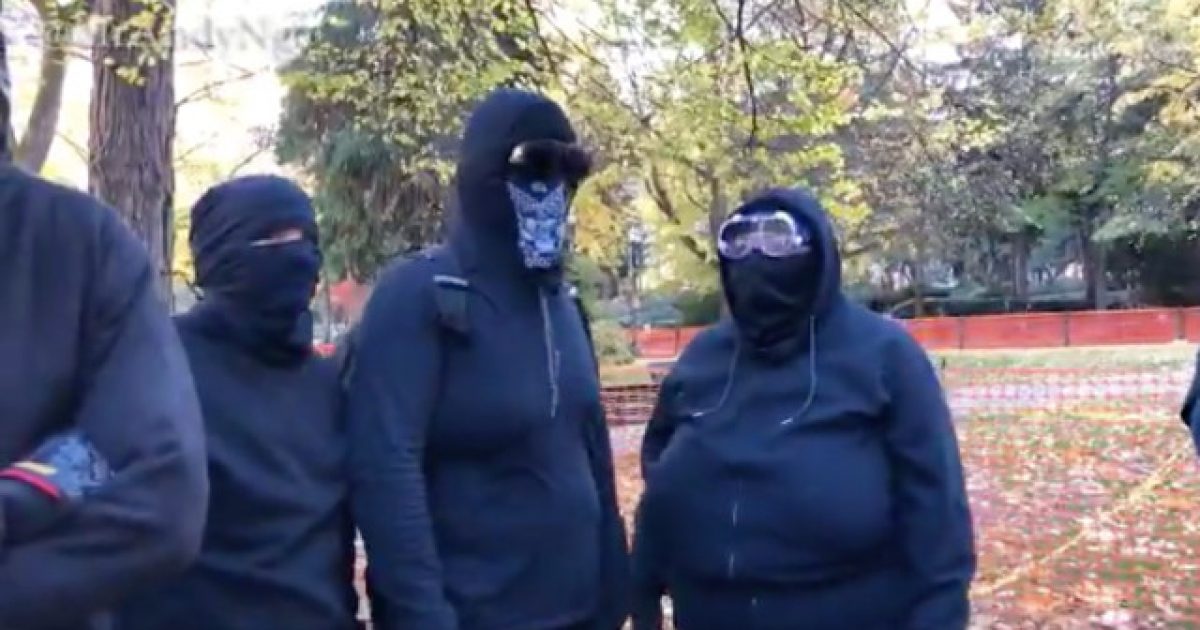 A #HimToo rally was crashed by a bunch of aggressive, and as turns out, violent Antifa protesters over the weekend, where a reporter was physically assaulted and verbally berated by the radical leftist group.

This sort of behavior has become par for the course with Antifa, who are notorious for throwing punches and engaging in horrendous verbal abuse of folks they politically disagree with.

“I was assaulted by a mob of masked individuals in black. They also targeted my equipment. They called me a fascist & Islamophobe. They said my parents & grandparents would be ashamed of me,” said independent journalist Andy C. Ngo, who’s also an editor at Quillette Magazine.

“It feels surreal to be treated this way by people who don’t even know me,” he said.

Ngo was covering a #HimToo rally, organized by a local activist Haley Adams, meant to draw awareness to male sexual assault victims and the falsely accused. The contentious rally ended with six arrests.

When the journalist first hit the rally, at around 2 p.m., he was met by Antifa members pushing him and telling him he was unwelcome. “I was accosted & pushed around by masked agitators,” he said.

“You are not welcome in this park; not by me, not by any of us,” said one female agitator.

“That’s okay. I don’t need your permission to be here,” replied Ngo, who then repeatedly asks her to stop touching him.

As soon as I entered Chapman Square in downtown Portland at approximately 1:40 pm, I was accosted & pushed around by masked agitators. pic.twitter.com/6uGf8VT0fa

“Your parents would be embarrassed by you — and your grandparents — who have been oppressed by white men throughout history. You should be ashamed of yourself,” said agitators, according to Ngo.

"Your parents would be embarrassed by you–and your grandparents–who have been oppressed by white men throughout history. You should be ashamed of yourself." pic.twitter.com/CRnq9U2vWI

Police eventually rushed in to push protesters back to get them further away from the #HimToo rally (in the adjacent plaza). They shouted in response: "Cops and Klan work hand-in-hand." #Antifa pic.twitter.com/9uooSeEXSn

At one point during the rally, Antifa members physically surrounded Ngo, acosted him, and then sprayed his camera down with silly string.

“A large group of #antifa protesters encircled me,” captioned the reporter. “After I am pushed away, a masked woman sprays my camera equipment & myself w/wet silly string. They then play music & laugh. I want to file a harassment report with [Portland Police] but the assailant’s identity is unknown.”

A large group of #antifa protesters encircled me. After I am pushed away, a masked woman sprays my camera equipment & myself w/wet silly string. They then play music & laugh. I want to file a harassment report with @PortlandPolice but the assailant's identity is unknown. pic.twitter.com/U0EWZcw8lF

If you need further proof that the people involved in the Antifa movement are out of control, just check out the following video clip Ngo captured.

WARNING: THIS VIDEO CONTAINS GRAPHIC MATERIAL THAT MAY NOT BE SAFE FOR WORK

NUDITY. Person with #Antifa group exposes himself to police. pic.twitter.com/PvHnS6TeBM

That, my friends, is absolutely disgusting. The folks involved with this movement should be ashamed of themselves for acting like this in public. This does nothing to win hearts and minds to their cause, which is what protesting is supposed to do.

How can they claim to be “fighting” fascism, when all they’re doing is making fools of themselves. Those dedicated to such a cause should be passing out educational material, holding debates with the opposition, doing whatever it takes to get their worldview out in front of as many people as possible.

Instead, these folks are engaging in thuggery. They are hoping to scare people into following their agenda, forcing them to go along with the program. There is no attempt to engage ideas.

Let’s hope those involved in Antifa wake up to the fact that this is not an effective means of being heard.