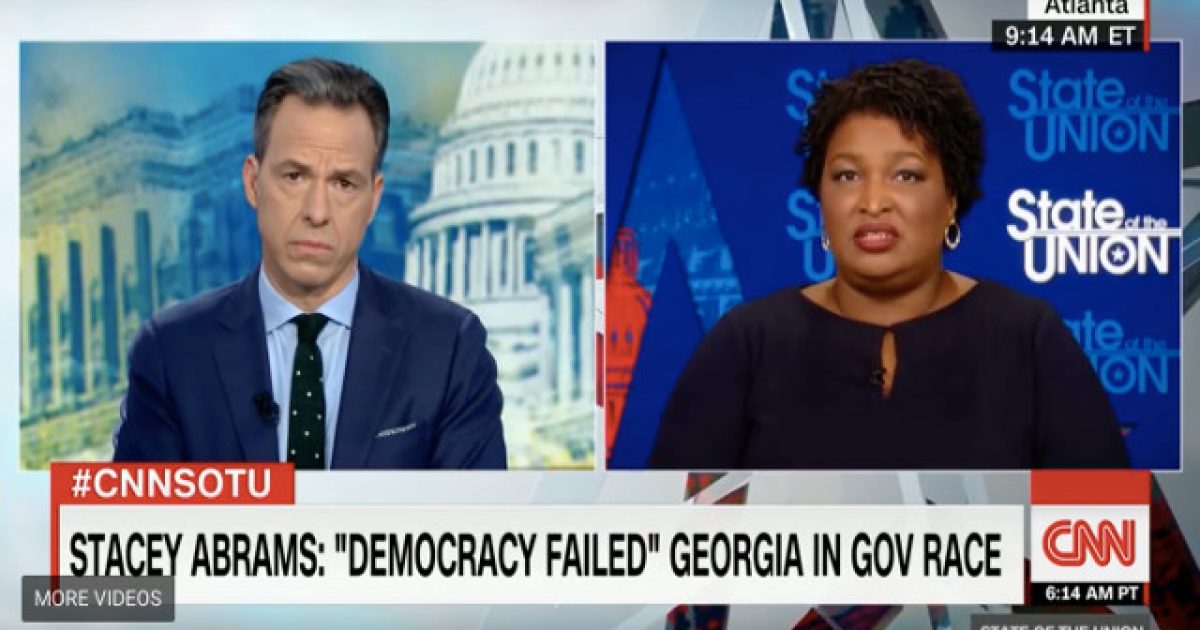 After a week and losing by a large number of votes, Democrat Stacey Abrams finally decided to do the right thing and concede the race, but she’s still anything but a gracious loser.

In fact, she more or less stated that she was giving up her campaign, but would not deliver a concession speech. Why? Because, according to her, “democracy failed in Georgia.”

In her first interview since losing to Kemp, Abrams was given a chance to change her tone a bit on the outcome of the election, but ended up doubling down on her rhetoric that her defeat was illegitimate and that Kemp had “benefited from his own perfidy.”

Asked by CNN’s Jake Tapper if she would call Kemp the “legitimate” governor-elect, Abrams said instead that she would only call him the “legal governor of the state of Georgia,” the “legal victor.”

“But what you are looking for me to say is that there was no compromise of our democracy, and that there should be some political compromise in the language I use, and that’s not right,” she said, Law & Crime’s Alberto Luperon notes. “What’s not right is saying something was done properly, when it was not.”

When pressed by Tapper if it was really fair to accuse Kemp of suppressing votes by expunging those who had not voted for several elections, as all states do, Abrams accused Kemp and others of a “deliberate and intentional” attempt to undermine legitimate voters. As evidence, she cited the single example a 92-year-old civil rights activist who allegedly learned election day that she’d been expunged.

“It’s not sufficient to simply purge voters from the roles for inactivity,” she charged. “He removed voters who were eligible. He also denied access to 3,000 new citizens who should’ve been added to the roles, but he prevented them from being able to vote.”

Abrams goes on and on in the clip above, blaming practically anyone and everyone for her loss, refusing to take responsibility for the fact that maybe, just maybe, her radical platform was just out of step with the average Georgia voter.

At the end of the day, no one lost this election for her. Voters made their choice. They rejected her policies and repudiated liberal ideology by their decision to vote in Kemp. It’s time for the left to stop making excuses for their losses and pull themselves back from the fringes of left-wing thinking.

If they really want to win hearts and minds, they’ll become centrists.