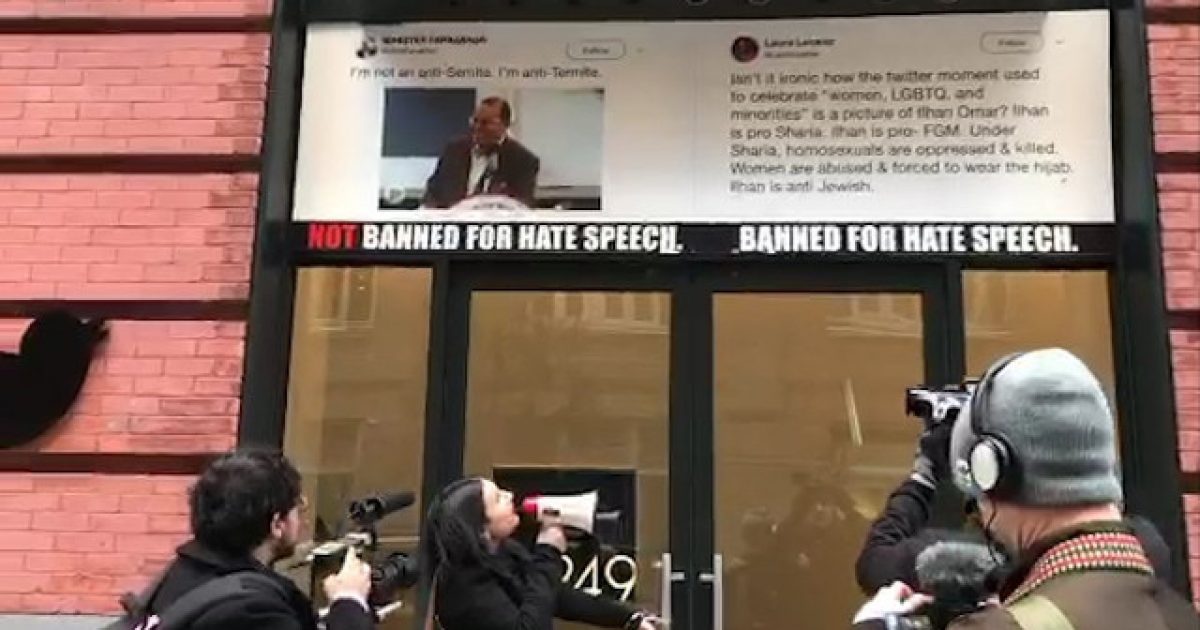 A self-described investigative journalist and right-wing activist, Laura Loomer, decided to share her true feelings about social media giant Twitter after her account was recently banned.

Loomer, along with a vast majority of conservatives, believe that Twitter is not consistently applying their “hate speech” policy, seeming to take aim at anyone who is not on board with the progressive agenda.

Loomer went to Twitter headquarters and handcuffed herself to the building.

“I threw away the key, and I’m here for the millions of conservatives who have been censored by [Twitter CEO] Jack Dorsey and [Facebook CEO] Mark Zuckerberg,” Loomer said during the demonstration.

Loomer was wearing a yellow Star of David on her coat.

The 25-year-old was banned from Twitter last week over a tweet which criticized Rep.-elect Ilhan Omar (D-MN) and Islamic practices like female genital mutilation (FGM). “Isn’t it ironic how the twitter moment used to celebrate ‘women, LGBTQ, and minorities’ is a picture of Ilhan Omar? Ilhan is pro-Sharia Ilhan is pro FGM. Under Sharia homosexuals are oppressed and killed. Women are abused and forced to wear the hijab. Ilhan is anti-Jewish,” she wrote.

Loomer was standing beneath a homemade poster which featured side-by-side Twitter screenshots of the tweet that earned her the ban and a blatantly anti-Semitic tweet from Louis Farrakhan, who still has an account. “Loomer blew up Louis Farrakhan’s tweet calling Jews ‘termites’ and showed it side-by-side next to the tweet that she was banned over where she called out Democrat Ilhan Omar for being pro-Sharia law and then listed off how Sharia law targets women and the LGBT community,” reported The Daily Wire’s Ryan Saavedra.

Laura Loomer blew up Louis Farrakhan's tweet calling Jews 'termites' and showed it side-by-side next to the tweet that she was banned over where she called out Democrat Ilhan Omar for being pro-Sharia law and then listed off how Sharia law targets women and the LGBT community. pic.twitter.com/4d1CzZ8dQW

Police say Twitter isn't pressing charges against Laura Loomer, so she can stay as long as she wants. The protest continues! If Laura wants to leave, the police say they'll cut the handcuff whenever she wants. pic.twitter.com/k7h269J08g

Twitter is not pressing charges against Loomer, therefore police stated they wouldn’t arrest her. Authorities also told Loomer they would help remove the cuffs by cutting them off if she so requested.

A spokesperson for Twitter stated that they banned Loomer’s account for violating their policies and the decision was not based on ideology.

Well, if that’s true, why hasn’t Farrakhan been banned for his inflammatory hate speech and Anti-Semitism? He’s still on the platform. If they are serious about being impartial, then he needs to be booted for his nonsense immediately. Like yesterday.

Loomer went on to end her protest at 6:20 p.m. Unfortunately, as of this writing, her account is still banned.