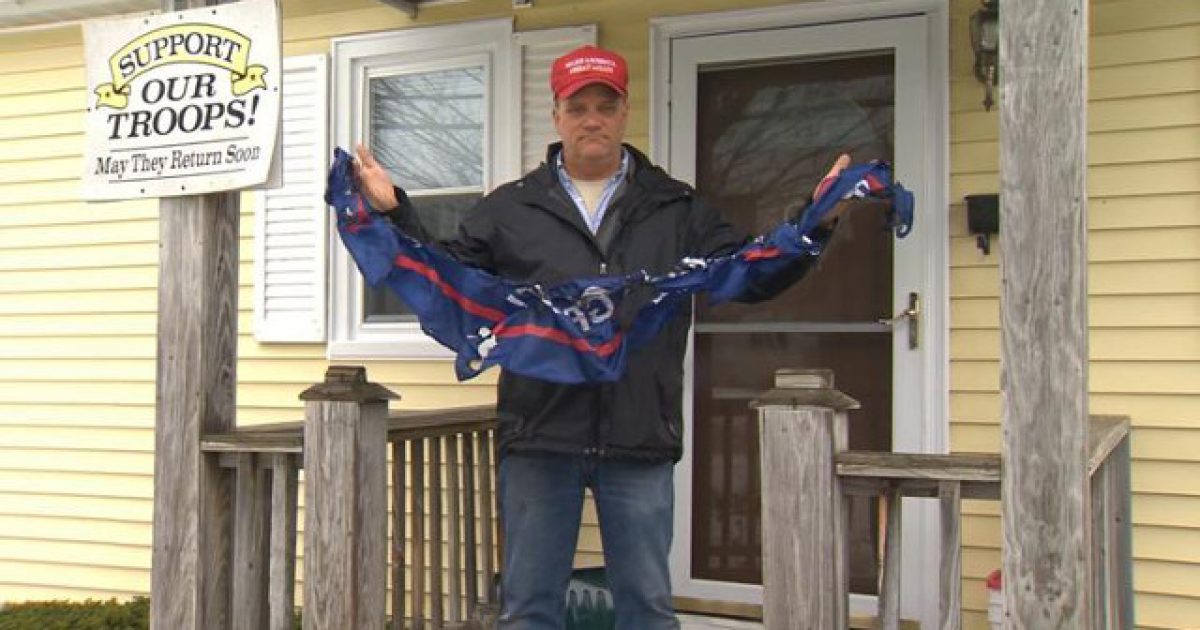 A Vermont veteran was shocked to discover that a group of vandals had taken his Trump flag and burned it right at his front door, and while this situation is deplorable, the president’s son, Eric, is stepping in to make the whole thing right.

This, ladies and gentlemen, is how the radical left-wing in modern America voices their political disagreements. With vandalism and other violent lawlessness. Shameful to say the least.

Annmarie Klein told New England Cable News that she and her husband Gus Klein awoke on Sunday to find their Trump flag burnt and left on their front stoop.

The Kleins say that the flag was taken from a pole on their front yard. They say that their neighborhood is politically liberal, but everyone usually gets along.

Police have stated that they are investigating the matter, but at the time of this writing, it doesn’t appear any progress in identifying the individuals responsible has been made.

Eric Trump, the son of the president, saw the story and tweeted that he would provide a replacement for the burnt flag.

“Gus,” Trump tweeted, “Thank you so much for the support and thank you for your service to our country!”

Gus,
Thank you so much for the support and thank you for your service to our country! Get us your address – a new Trump 2020 Flag will be coming your way! Keep up the fight! ????????????????????????#MakeAmericaGreatAgain ⁦@realDonaldTrump⁩ ⁦@LaraLeaTrump⁩ https://t.co/EuKSSnTk0W

A spokesman for the Vermont Democratic Party has denounced the action — obviously he’s aware the individuals responsible for this act of vandalism belong to his side of the aisle — releasing a statement noting how “difference of thought is what makes us average Americans.”

He finished up by saying, “But it’s the level of respect with which we are treat that difference that makes us Vermonters — that makes us unique.”

At the end of the day, there’s a right way and a wrong way for us to express our political differences. Burning someone else’s property is clearly not the right way. It’s shameful that such a sentiment even needs to be clarified, but alas, that’s the world we live currently live in, isn’t it?