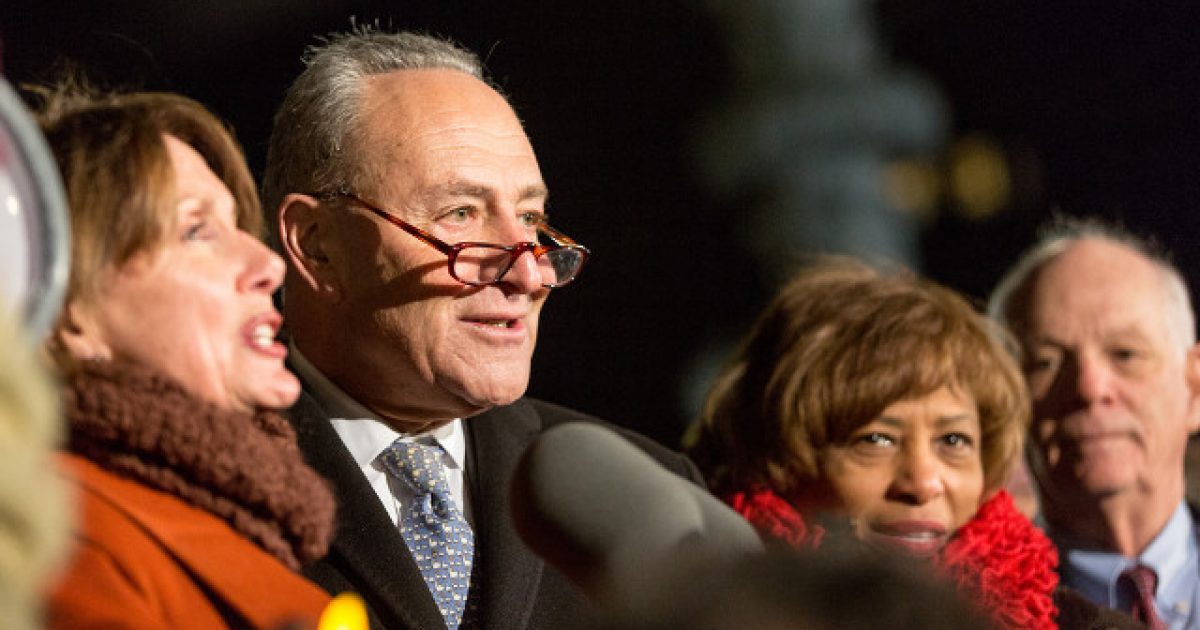 Senate Minority Leader Chuck Schumer is finding himself in the doghouse with fellow members of the progressive movement who are not too happy with his confession of negotiating with President Trump over the infamous and oh so controversial border wall.

CNN reporter Manu Raju reported that Schumer is willing to cede $1.6 billion to fund the border wall, which is much, much less than the $5 billion the president requests.

Sen. Chuck Schumer tells reporters at his on-cam presser that Democrats’ position is $1.6 billion for wall funding – far less than the $5 billion Trump wants – but he won’t say if Democrats are shutting the door on anything more, saying he’s not going to negotiate in public.

“Sen. Chuck Schumer tells reporters at his on-cam presser that Democrats’ position is $1.6 billion for wall funding,” Raju tweeted, “far less than the $5 billion Trump wants – but he won’t say if Democrats are shutting the door on anything more, saying he’s not going to negotiate in public.”

Raju later indicated that Schumer’s office corrected the statement by adding that the $1.6 billion was for border security, including fencing, but not a wall.

“The $1.6 billion for border security negotiated by Democrats and Republicans is our position,” Schumer said at the media briefing.

Our position has been clear from the beginning: Ds & Rs have a months-old agreement in the Senate. $1.6B for border security, NOT a concrete wall or increases in detention beds or ICE agents. We should stick to this agreement. If POTUS interferes, he is responsible for a shutdown

Unfortunately for Schumer, a good portion of his left-wing pals felt this was a capitulation to Trump and they took to social media to express that sentiment in no uncertain terms.

“Your periodic reminder that Nancy Pelosi was the only person in all of Democratic leadership to face a coup attempt. Also Dems on track to win 40 net House seats, cede FL, MO, IN and ND U.S. Senate seats. All of this is fine,” tweeted fellow MSNBC host Joy Reid.

“People living in our borderlands would have their environment and communities destroyed by Trump’s wall, @SenSchumer. They deserve a public debate,” tweeted the official ACLU account. “We’ll start: There’s no reason Democrats should be giving in and allocating any funding for a wall, let alone $1.6 billion.”

“No idea why Chuck Schumer is still the Senate Minority leader,” said journalist Molly Knight. “This is a joke. If he’s the best we can do then we don’t deserve to be in power.”

And that’s just the tip of the iceberg.

All of this outrage is really telling. It shows you that the majority of Democrats are not at all willing to work with Republicans for the mutual benefit of the American people. They want it their way or no way. That’s not how a republic functions.

Both sides need to learn to come together, to balance each other out, for the good of the people. This requires both sides to swallow their egos and do a little give-and-take.

Now if only the left understood that.