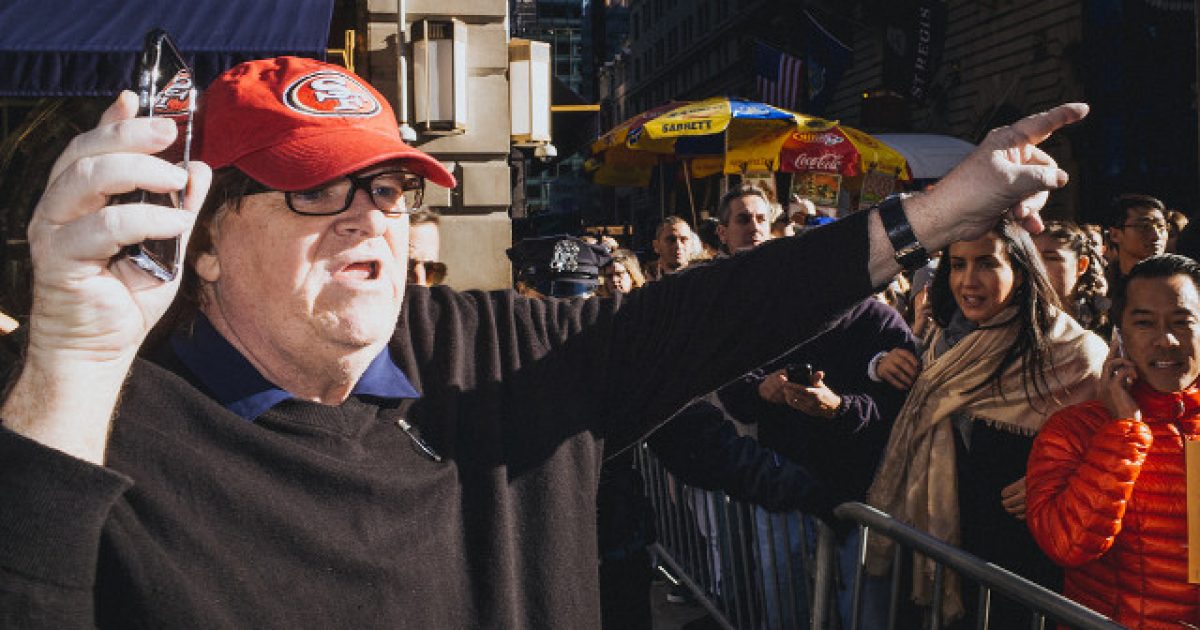 Well, left-wing documentary filmmaker Michael Moore decided he’d post the meme on his Facebook page for his 2.3 million followers. However, while the comment itself is pretty rude, it’s nothing compared to the vitriol spewed forth in the comment section.

Sure enough, Moore’s Monday night post drew more than 33,000 likes and loves and over 900 comments as of Tuesday morning — and at first glance the written responses to his post appeared way harsher than the meme itself.

“It will be a better world when Christianity is just a historical memory.”

“Discovered many years ago that I was far more Christian in deeds than anyone I knew that went to church. In fact I knew many church Christians who were horrible people that I could never associate with. Gun-toting, hate-mongering, racist placard-carrying, white-privileged, self-professed Christians that do not resemble any follower of Christ that I want to associate with. I like my brand better of Christian better.”

“My neighbors go to church every Sunday but yet they harass everyone. Apparently this saying is so true: Going to Church doesn’t make you any more of a Christian than standing in a garage makes you a car.”

“Atheists are more ‘Christian’ than a vast majority of so called Christians!”

“I’d rather take religion out of everything.”

“I am a Christian, AND I completely endorse this message.”

“I’m an atheist, and I’m a better CHRISTIAN than these people.”

“People don’t need Christ to do the right thing.”

“I’ve been saying for about two years now that it is a strange event when I, an atheist, seem to have more respect for Christianity than GOP Christians do.”

But not every commenter endorsed Moore’s meme: “The comments reflect persecution. And it is the only persecution tolerated in this country. It is not only anti-Catholicism, and anti-Christianity, it is anti-Semitism, and anti-religion … all religion. It is sick, hate filled, and dangerous. It is the open door to a totalitarian government, because only atheism can endure the activities of totalitarianism. What is happening on our border, for example, would not be tolerated by ANY faith, but only by the faithless.”

What’s totally ironic about these comments is that they slam Christians for not being tolerant, loving, kind, humble, ect., all the while they are being cruel and oppressive toward those who think and believe differently than they do.

These folk seem to think that only Christians can be hypocritical. That’s obviously not true. Everyone is a hypocrite about something at some time or another. That’s called being a fallen, sinful human being.

The difference between a Christian and an unbeliever is that we know we can by hypocritical, that we don’t always live up to the holy, perfect, righteous standards of God, but despite that, thanks to the work of Jesus Christ in His life, death, and resurrection, we can still be saved by faith in Him.

Jesus obeyed the law of God perfectly, earning righteousness, doing what we could never do. By dying on the cross to pay the penalty of our sin, He exchanges our condemnation for His righteousness so that God sees us as perfect and blameless, though we aren’t. It’s the Great Exchange.

Now, that doesn’t mean we can do whatever we want. We should be striving for obedience in Christ, and yes, we often still fail and fall short. Yes, the church should be more involved in the world, helping the poor and needy, providing comfort to the broken, ect.

However, Christians around the world are acting like the hands and feet of Jesus every single day. However, since such action doesn’t fit the hateful narrative the left has created about the church, that stuff never gets reported.

Rather than getting angry at these folks, let’s all just pray for them.