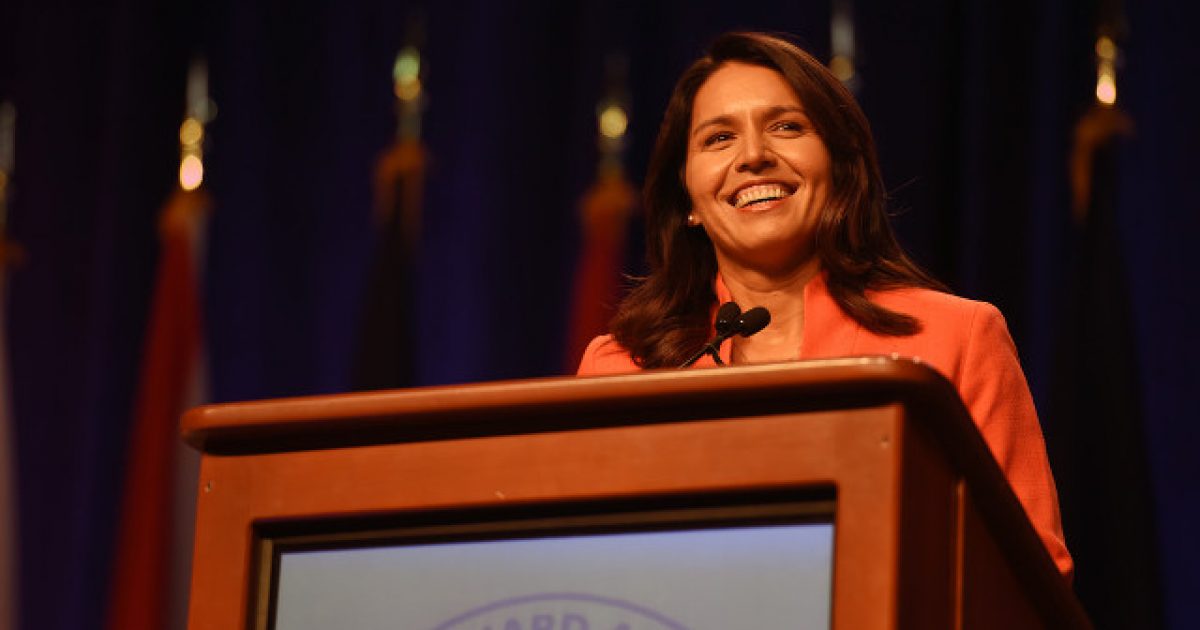 With two years of the Trump presidency now under our belts, you’d think that liberal politicians and news media folks would know better than to try and get “gritty” in their attacks against this administration.

It seems the left is comprised of individuals who either lack sense, enjoy being humiliated, or suffer under the delusion that they can somehow succeed in taking the president down, despite the failure of those who came before them.

Rep. Tulsi Gabbard, a Democrat, decided she’d toss out some vulgar language in a verbal assault against Trump on Twitter. The only problem is she basically knocks herself out instead.

Hey @realdonaldtrump: being Saudi Arabia’s bitch is not “America First.”

Trump had said, “If we abandon Saudi Arabia, it would be a terrible mistake.” He added, “We may never know all of the facts surrounding the murder of Mr. Jamal Khashoggi. In any case, our relationship is with the Kingdom of Saudi Arabia. They have been a great ally in our very important fight against Iran.”

As The Washington Examiner pointed out, Gabbard has some shaky ground she’s standing on, considering she met with Syrian President Bashar Assad in January 2017 and later publicly doubted claims that Assad had used chemical weapons on his own citizens. Gabbard’s defense of Assad came in the face of the U.S. and its allies agreeing that Assad had indeed used chemical weapons on his own people. Additionally, Syria is in league with Iran, a vehement foe of Saudi Arabia.

Gabbard’s vulgar attack on Trump triggered Rep. Adam Kinzinger (R-IL) to fire back, “And how would you describe your fondness for Assad? Asking for the 500,000 Syrians he murdered … including the 50,000 children who gasped their last breath because of him.”

And how would you describe your fondness for Assad? Asking for the 500,000 Syrians he murdered… including the 50,000 children who gasped their last breath because of him. https://t.co/5Ezre1lWwO

The Washington Post said of Gabbard’s trip to meet Assad:

The actual source of the funding for the trip is murky, too. But there’s no doubt the Assad regime facilitated it. Not only did the group get an audience with the president, but they also received access to sensitive areas under the protection of government forces. In several arranged meetings, Syrians told Gabbard that Assad is a benevolent ruler fighting terrorists and that the U.S. policy of opposing him is unjust. Upon her return, Gabbard referenced those Syrians in interviews and op-eds to reinforce her long-held opposition to what she calls the U.S. “regime change” policy in Syria. She also asserted there are no moderate rebels in Syria and that the United States is funding and arming al-Qaeda and the Islamic State. Neither is true, but both match the talking points that the Assad regime has been pushing for the entirety of the war.

CNN’s Jake Tapper asked Gabbard if she had any sort of reservations about meeting with Assad. The answer was a long winded, ramble that basically amounted to a big, fat “no.”

“Whatever you think about President Assad, the fact is that he is the president of Syria. In order for any peace agreement, in order for any possibility of a viable peace agreement to occur there has to be a conversation with him. My commitment is on ending this war that has caused so much suffering to the Syrian people, to these children, to these families, many of whom I met on this trip … (The Syrians) asked me, ‘Why are the United States and its allies supporting these terror groups which are destroying Syria, when it was al Qaeda that attacked the United States on 9/11, not Syria.’ I didn’t have an answer to them.”

Again, one has to wonder why these folks are such gluttons for punishment that they’d honestly try and take on Trump and the other officials in his administration without getting smacked by to reality by facts.

Perhaps, now that Gabbard has been put back in her place, she’ll think things through a little bit before deciding to get down in the dirt?