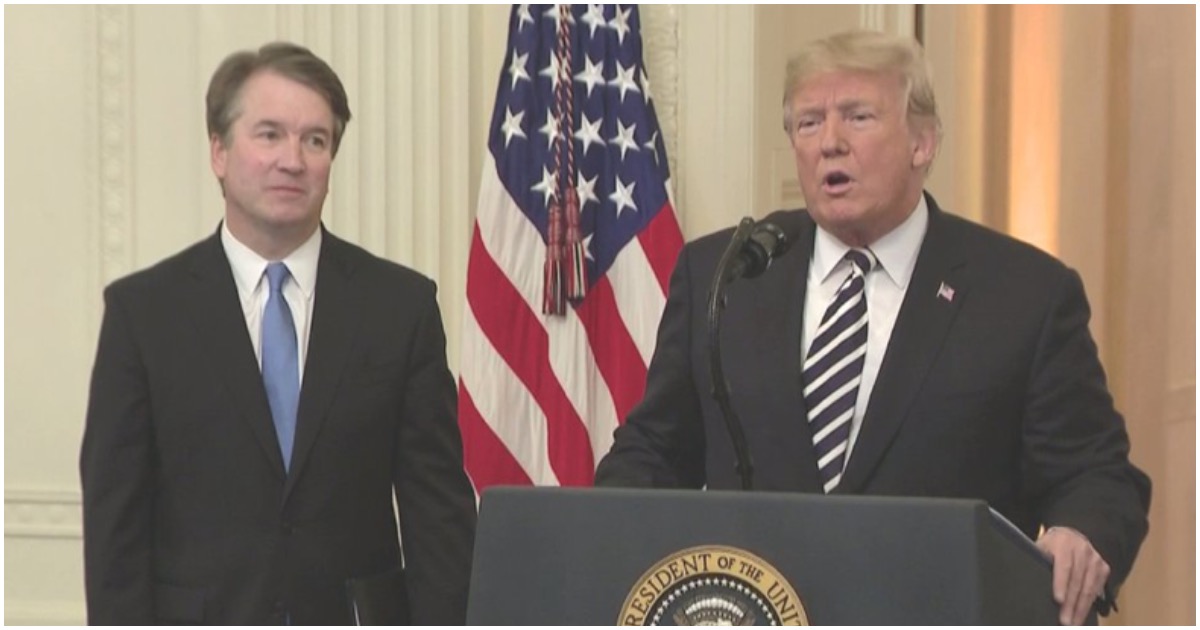 During a swearing-in ceremony at the White House on Monday night, President Trump apologized to Justice Brett Kavanaugh and his family for the hardship they were forced to endure over the past month.

He also dropped two words that are sure to drive more than a few liberals wild.

President Trump apologizes to Supreme Court Justice Brett Kavanaugh and his family for "the terrible pain and suffering he has been forced to endure" during his confirmation process at Kavanaugh's swearing-in ceremony https://t.co/ykmBslj0Kt pic.twitter.com/56ZreUt5wm

“Those who step forward to serve our country deserve a fair and dignified evaluation, not a campaign of political and personal destruction based on lies and deception,” Trump continued.

“What happened to the Kavanaugh family violates every notion of fairness, decency, and due process,” Trump said. “[In] our country, a man or a woman, must always be presumed innocent unless and until proven guilty.”

Pres Trump offers a public apology to Justice Kavanaugh "for the terrible pain and suffering" he had to endure during the confirmation process. @POTUS said it should not have been "a campaign of personal destruction." pic.twitter.com/eUoJKWdr9n

"You sir, under historic scrutiny, were proven innocent," Pres Trump tells Justice Kavanaugh. And then addressing himself to Kavanaugh's daughters, @POTUS told them, "your father is a great man," citing his decency and courage. pic.twitter.com/Yz3MH8bLTc

In front of the entire country and world, live on every major outlet, Donald Trump apologizes to Brett Kavanaugh and his family for "the terrible pain and suffering" the Left has subjected them to.

All jaws are on the floor. pic.twitter.com/m7xYZmnrKI

President Trump described the Kavanaugh confirmation process as one "based on lies and deception" and declared he was "proven innocent" of allegations against him.

Trump: “I want to apologize” to Kavanaugh and family for allegations he says were based on “lies and deception.”

Liberals are losing it:

On behalf of those in the US who thinks Trump is a FRAUD & a CON & A RACIST BASTARD & that Kavanaugh is UNFIT for SCOTUS & a threat to ALL WOMEN,"MOTHA'FUCKA DON'T YOU EVAH SPEAK ON MY BEHALF!" @realDonaldTrump https://t.co/r1IhZgr4KK

At the White House swearing-in, Trump obscenely made the occasion a purely partisan one with his ludicrous claim that Justice Kavanaugh had been “proven innocent” and his misogynistic apology for the Senate’s even having listened to Dr. Blasey Ford.

Trump's one redeeming quality is he doesn't know when to quit & takes victory laps so far that now Brett Kavanaugh will never be respected even inside the Supreme Court.

My official reaction to what’s happening in the East Room right now…. pic.twitter.com/g0jAD5OZsW

This is waay waay worse than I imagined and I thought it would be bad.

I now realize this speech is happening to erase the memory of his Thursday performance so it's not the last thing in people's minds before he takes the seat on the court.

Just crystallized for me how much this entire thing was a dry run for when Mueller submits his findings.

At the conclusion of Trump’s remarks, Kennedy administered the oath to Kavanaugh as his family looked on, and the room again broke out into sustained applause. As Trump noted, it was the first time a Supreme Court justice has ever sworn in his former clerk to take his seat.

Taking the podium as the Supreme Court’s newest justice, Kavanaugh acknowledged the partisan rancor that surrounded his confirmation and gripped the nation over the past two months. “I take this office with gratitude and no bitterness,” he said.