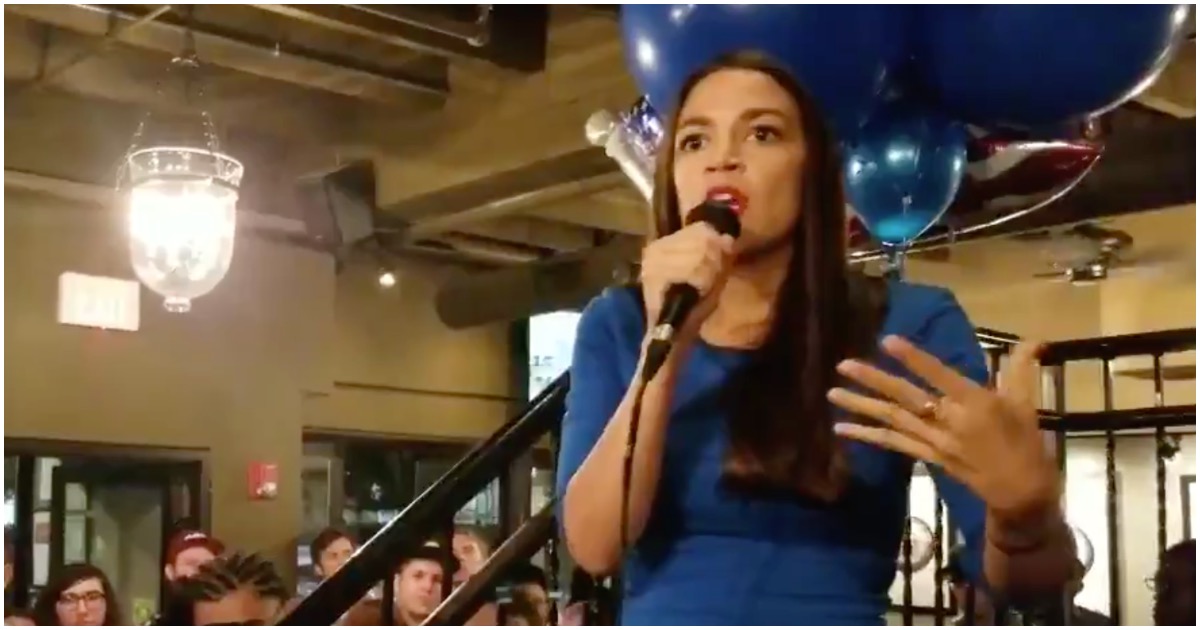 Democratic socialist Congressional candidate Alexandria Ocasio-Cortez (NY) proved to the nation that she really doesn’t know what she’s talking about (if she hasn’t already) or how Congress functions.

During a speech in what appears to be a basement on Monday, Alexandria’s ignorance was on full display.

Democratic socialist Alexandria Ocasio-Cortez showed her extreme lack of knowledge about the basic roles of the three branches of the federal government during a speech on Monday, suggesting that after she is “inaugurated” into office that she will begin signing bills into law.

Democratic socialist Alexandria Ocasio-Cortez thinks that if she wins her congressional race this November that she will be "inaugurated" into office and will be signing bills into law.pic.twitter.com/Sp7OgW2gmR

Are members of Congress inaugurated or simply “sworn in?”

That should be rhetorical.

Shh, don't tell Ocasio-Cortez that she won't be "inaugurated." It should be fun to watch her give an inaugural address and start writing Executive Orders.

Good God, she has no *bleeping* idea how government works. This is stuff you learn in 8th grade US History.

She honestly has no idea in her head how government work. Extremely fitting that Obama endorsed her, I’m sure he’s so proud.

Anyone who halfway paid attention to Schoolhouse Rock would have at least a cursory understanding of the 3 branches of government. pic.twitter.com/q5fpSxJpNY

I want to hear her State of the Union Address in January! Can she be impeached?

Check out CNN’s Jake Tapper grilling Alexandria on her $40 trillion plan, then watch as she KO’s herself:

Tapper began by laying out the policies — such as Medicare for all, tuition-free public college and the cancellation of student loan debt — and the price tag, saying, “According to nonpartisan and left-leaning Tax Policy Center, the overall price tag is more than $40 trillion in the next decade. You recently said in an interview increasing taxes on the very wealthy, increased corporate tax rate would make $2 trillion over the next 10 years. Where is the other $38 trillion going to come from?”

Ocasio-Cortez dismissed the question, arguing that a Medicare for all policy would ultimately save money over time. She expounded on the virtues on “investments that are better for our future,” citing the U.K., Canada, and France as working examples of the model she preferred.

TAPPER: “Your platform has called for various new programs including Medicare for all, housing as a federal right, federal jobs guaranteed, tuition free public college, canceling all student loan debt. According to nonpartisan and Left leaning studies friendly to your cause, including the Center on Budget and Policy Priorities or the Tax Policy Center, the overall price tag is more than $40 trillion in the next decade. You recently said in an interview increasing taxes on the very wealthy, plus an increased corporate tax rate would make $2 trillion over the next ten years. Where is the other $38 trillion going to come from?”

OCASIO-CORTEZ: “One of the things we need to realize when we look at something like Medicare for all, Medicare for all would save the American people a very large amount of money. What we see as well is that these systems are not just pie in the sky. Many of them are accomplished by every modern civilized democracy in the western world. The United Kingdom has a form of single payer health care, Canada, France, Germany. We need to realize that these investments are better and they are good for our future. These are generational investments so that they are not short-term Band-Aids but they are really profound decisions about who we want to be as a nation and how we want to act as the wealthiest nation in the history of the world.”

???? What’s so humorous about this…it’s not her ideas, it’s the folks who voted for her and actually believe that money ???? drops from the skies above. I think 10 of her supporters should step forward & let us know how her ideas are going to work?

.@jaketapper does a great job pressing Alexandria Ocasio-Cortez on how she'd pay for her healthcare plan — she says economic activity from millennial who would buy homes if they didn't have student debt — and highlights that she did not actually answer his two attempts to ask.

Jake Tapper asks Alexandria Ocasio Cortez how she will pay for the $40T price tag on her socialist agenda. She says it will save money. What? #sotu

Money doesn’t drop from the sky, it’s debt that is represented by additional 1s and 0s in central bank accounts. Some of those units are also represented by paper and metal that the government creates at will.

Alexandria needs to think this one through.