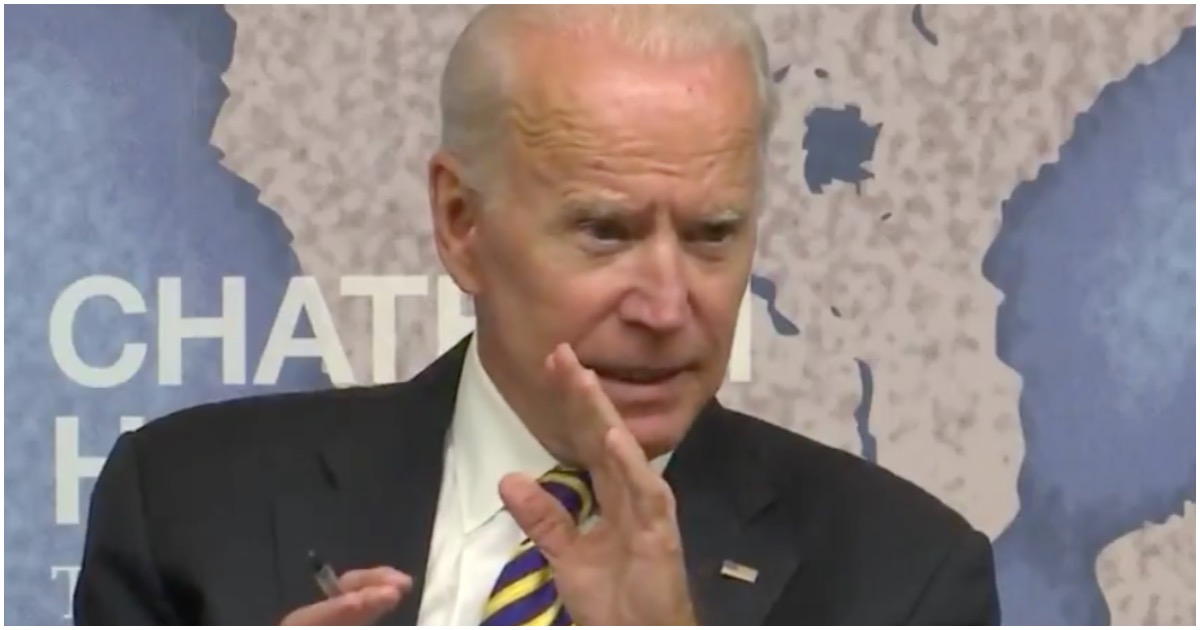 Will he or won’t he?

That’s the question Democrats are pondering concerning Joe Biden’s potential run for the White House in 2020.

On Wednesday, Biden made a big announcement.

He’s hinting at something…

During a Wednesday appearance in London, the former Vice President says he’s not running for president — “at this point.”

Joe Biden says he's not running for President in 2020 'at this point' pic.twitter.com/N2uwtjtJVp

Biden has been known for saying some wacky things in the past.

However, comparing the Brett Kavanaugh sexual assault allegations to a famous rape scene from the movie “Deliverance” is one of the craziest things yet.

During a live interview with former Vice President Joe Biden on Friday’s Today show, co-host Craig Melvin invited the former Judiciary Committee Chairman to advise the Senate on how to handle a potential hearing with Brett Kavanaugh’s accuser, Christine Blasey Ford. In his response, Biden was given free rein to blast Republicans for trying to “character assassinate” Clarence Thomas accuser Anita Hill and even compared the claims against Kavanaugh to a graphic movie rape scene.

“How would you suggest that the Senate handle these allegations?,” Melvin asked as the softball exchange began. Biden demanded an FBI investigation and then recalled the Senate hearing he lead examining Hill’s sexual harassment claims against Thomas during the 1991 Supreme Court confirmation battle: “Anita Hill was vilified when she came forward by a lot of my colleagues, character assassination. I wish I could have done more to prevent those questions and the way they asked them. I hope my colleagues learn from that…”

Moments later, Melvin observed: “It seems like you get it now, versus back in ’91?” Biden argued: “Well, I think I got it in ’91….it’s important that people understand, and I think people do now, understand how hard it is to come forward.” The Democrat then made this eyebrow-raising comparison: “And I always say to men, they say why is it so hard? How about if you had been abused? You see the movie Deliverance, how about if you were the guy strapped to the tree, would you come forward? Would you want to relive that?”

Melvin’s facial expression clearly showed he was taken aback by the reference to an explicit gay rape scene featured in the 1972 film. Biden insisted: “I’m serious, I’m deadly earnest.” Rather than push back on the extreme comment, Melvin simply moved on to wonder about Biden’s 2020 presidential ambitions.

Biden has vehemently defended Kavanaugh’s sexual assault accuser, Christine Blasey Ford. That is, until one pertinent question caused him to quickly back off.

It’s pretty hard to defend a 35-year-old accusation, isn’t it?

Former Vice President Joe Biden emphatically supported Kavanaugh accuser Dr. Christine Blasey Ford Monday night, faltering only when a reporter asked him about the credibility of a claim made over 35 years ago.

“What I’m going to do is I’m not going to answer any more questions,” Biden said, deflecting a reporter’s question asking whether it was significant that the assault claim refers to an incident that allegedly occurred when Supreme Court nominee Brett Kavanaugh was 17 years old.

“I’d be happy to talk about Ireland,” Biden added during his remarks to a group of reporters at Irish ambassador to the U.S. Dan Mulhall’s residence.

Biden delivered a glowing endorsement Monday night of women who come forward with accusations of assault. “For a woman to come forward in the glaring lights of focus, nationally, you’ve got to start off with the presumption that at least the essence of what she’s talking about is real, whether or not she forgets facts, whether or not it’s been made worse or better over time,” Biden said, adding that “[coming forward] is like jumping into a cauldron.”

During a recent speech in Washington DC, Biden referred to Trump supporters as “dregs of society.”

Former Vice President Joe Biden is asking for God’s forgiveness for not speaking up against President Donald Trump sooner as his wife Jill reassured the audience at a posh human rights fundraising dinner the couple wants to ‘pick a fight’ against bullies.

‘Barack and I agreed to remain silent for a while to give this administration the chance to get up and running in the first year,’ Biden told the crowd at the Human Rights Campaign annual fundraising gala in Washington D.C. on Saturday night.

Barack and Biden were silent up until now?

Is anyone buying that, Joe?

‘God forgive me,’ he added, making the sign of the cross as the audience roared with laughter and applause.

One person on Twitter described Joe’s words as going “way beyond” Hillary’s “deplorables” line from 2016.

Biden refers to Trump supporters as "dregs of society". This goes way beyond "deplorables". pic.twitter.com/TrMMKHtsUk