She knows that her days of claiming Native American heritage are in the past, after the results of a DNA test show she’s at best 1/64th Cherokee (more on that below).

Warren also sees her hopes of earning the Democrat nomination for president in 2020 slipping through her fingers.

Her latest rant is aimed directly at President Donald Trump, and it reeks of desperation.

We all know why @realDonaldTrump makes creepy physical threats about me, right? He’s scared. He’s trying to do what he always does to women who scare him: call us names, attack us personally, shrink us down to feel better about himself. It may soothe his ego – but it won’t work. pic.twitter.com/2rfPSlvlQA

Bottom line: My heritage played no role in my hiring – ever. The @BostonGlobe reviewed all the evidence. Their verdict? "At every step of her remarkable rise in the legal profession, the people responsible for hiring her saw her as a white woman." https://t.co/LTQ6d1sMwM

They changed their headline after the fact to make it seem as if Warren could do no wrong, from a story not long ago.

*Interesting* change of headline by @BostonGlobe from "it's complicated" about Elizabeth Warren to definitive No re whether her claim to be minority helped her pic.twitter.com/QzEJtxZWPH

The Boston Globe is not to be taken seriously, after making corrections to Warren’s DNA test post on Monday (as well as the aforementioned article).

There will be another correction, because's that's not what the test showed. It suggested she might be between 1/64th and 1/1024th Mexican, Colombian, or Peruvian. https://t.co/dA2R4zk79j

The Boston Globe had to issue a second embarrassing correction to their story claiming that Sen. Elizabeth Warren (D-MA) is Native American, admitting that the newspaper made “a math error.”

The embarrassing report from Annie Linskey even noted that the analysis of Warren’s genetic ancestry was based not on Native American DNA, but on Mexican, Peruvian, and Colombian DNA.

Even more embarrassing, a comprehensive study by geneticists estimated that the average European-American has 0.18% Native American DNA, which may be higher than Warren.

Back to Warren’s rant:

I won't sit quietly for @realDonaldTrump's racism, so I took a test. But DNA & family history has nothing to do with tribal affiliation or citizenship, which is determined only – only – by Tribal Nations. I respect the distinction, & don't list myself as Native in the Senate.

Speaking of family stories, @realDonaldTrump has one, too. It's the story of a second-generation tax cheat who was handed a $413 million inheritance through rich-guy loopholes and outright criminal fraud. https://t.co/ZHJIm4GQG3

If @realDonaldTrump – a cowardly elitist who has never known or cared what life is like for anyone who's ever lived outside of a skyscraper in Manhattan – wants to talk about authenticity, well then, let's talk about who's REALLY pretending to be someone they're not.

For starters, @realDonaldTrump wants us to think he’s a billionaire – but he won’t show us his tax returns. Why? Maybe he isn’t as rich as he pretends, & he doesn’t want us to know that his "empire" is really built on debts he owes to some sketchy characters.

And @realDonaldTrump brags about being a successful businessman – but he’s only good at going bust (he even lost money with a casino!) and cheating people: scamming Trump U students, shortchanging workers and contractors, & abusing bankruptcy laws to save his own skin.

The Cherokee Nation weighed in and they’re not pleased with Warren. 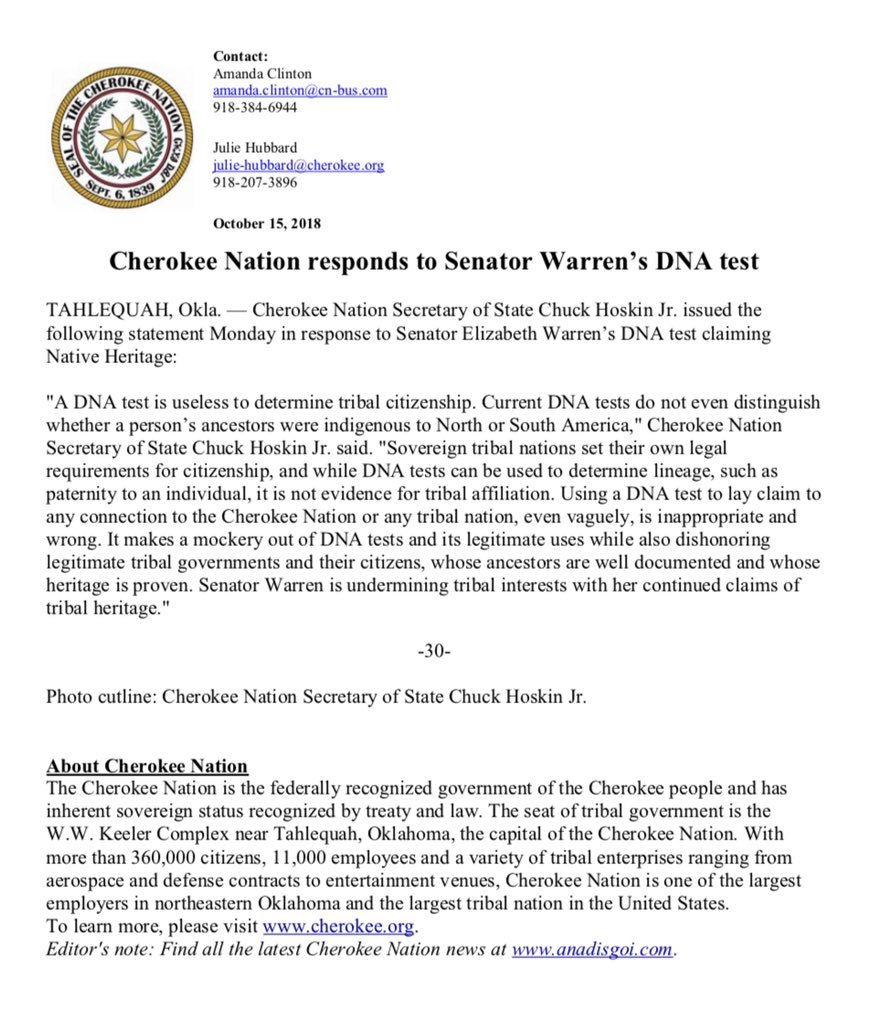