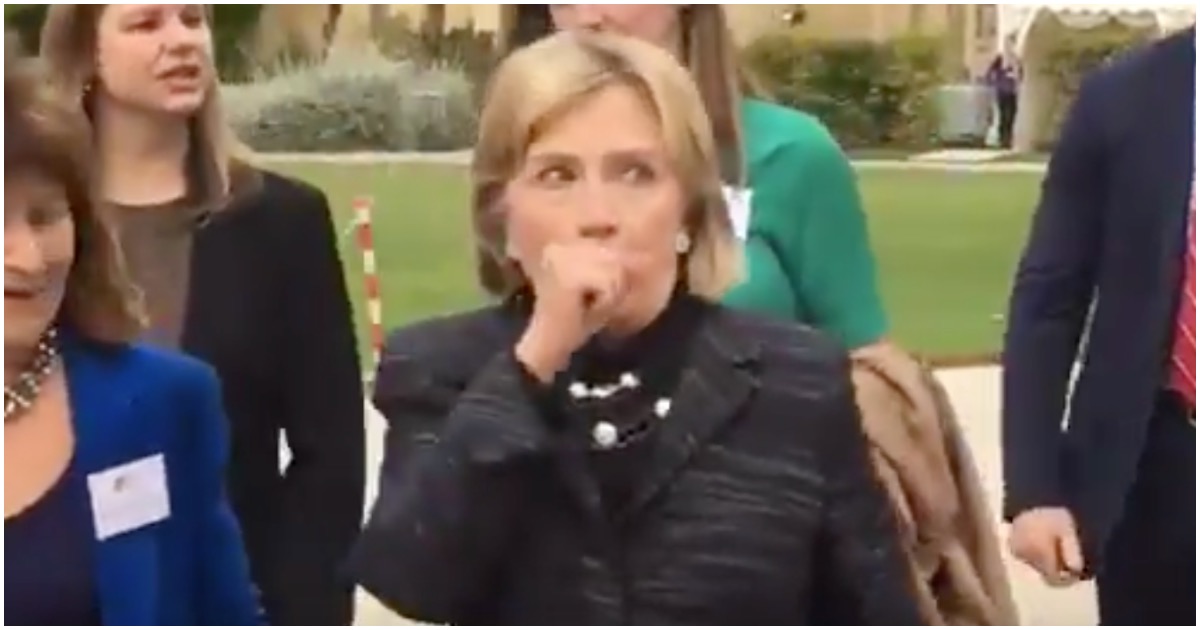 If not aware before, it became clear to the nation that Hillary Clinton was physically unable to perform the duties of president of the United States after collapsing at a 9/11 remembrance in 2016.

Since then, Clinton has been seen tripping down stairs and needing help up them.

While walking on the campus of Mansfield College in England, Hillary broke out into one of her legendary coughing fits.

Don’t forget about this:

.@HillaryClinton promises to continue to fight for women's rights, and urges all of us "to be brave." pic.twitter.com/IrV1tIpxCC

Either that, or she’s gearing up for a third run at the Oval Office by constantly bashing President Trump on Twitter and around the world.

Clinton’s latest rant lectures 45 on ignoring the rule of law, which is instant comedy gold.

I've written a new afterword for "What Happened" breaking down what we've learned since it was published, how we got here, and how we can heal our body politic. The new edition is available today: https://t.co/RPyFsw96xT

On the day after the election, I hoped my fears for our country's future were overblown.

Donald Trump refuses to be subject to the law. The legitimacy of our elections is in doubt. The president is waging war on the truth. The administration is undermining the national unity that makes democracy possible. And then there's the breathtaking corruption.

There is a tendency, when talking about these things, to wring our hands about "both sides." But the truth is that this is not a symmetrical problem.

We should be clear about this: The increasing radicalism and irresponsibility of the Republican Party, including decades of demeaning government, demonizing Democrats, and debasing norms, is what gave us Donald Trump.

With our democracy in crisis and our institutions and traditions under siege, we need to do everything we can to fight back. Here's how.

First: We’ve got to mobilize turnout in the midterms. There are fantastic candidates all over the country who’ll do great things, and we could finally see some congressional oversight of the White House.

Then, we need to do some housecleaning. Just as Nixon’s abuses of power led to reforms, post-Trump all future presidential candidates should be required by law to release their tax returns. They also should not be exempt from ethics requirements and conflict-of-interest rules.

We need to improve and protect our elections, from instituting paper ballot backups to repairing the Voting Rights Act, getting secret money out of politics, and—you won't be surprised to hear my support for this—abolishing the Electoral College.

Above all, we need to find a way to restitch our fraying social fabric and rekindle our civic spirit. We need to bring back civics education in our schools. We need systemic economic reforms that reduce inequality and give a strong voice to working families.

Democracy works only when we accept that we’re in this together.

We can’t just ask, “Am I better off than I was four years ago?” We have to ask, “Are we better off? Are we as a country better, stronger, and fairer?” Ultimately, healing our country will come down to each of us.

Never, ever lecture anyone on not being subject to the law. Ever.

Hillary must’ve forgotten that she’s been caught lying to the American people for decades, breaking numerous laws in the process.

In fact, Hillary was nearly tried for perjury.