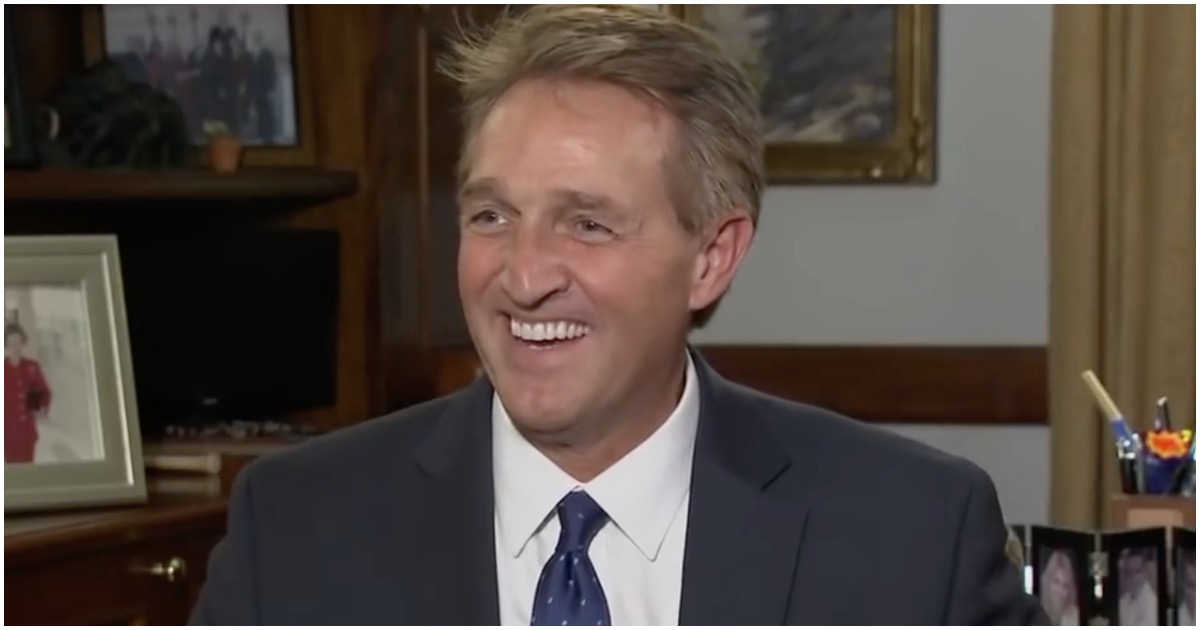 That’s pretty much the reason he knew he wouldn’t be re-elected in Arizona in 2018.

Sen. Jeff Flake, R-Ariz., said in a recent interview that he hopes somebody runs against President Trump in the 2020 election, and that Trump supporters’ continued chants of “lock her up” — typically in reference to Hillary Clinton — are “disturbing.”

In his retirement interview with C-SPAN, Flake said the chants, which were sparked by Trump’s campaign and have continued throughout his presidency, are more concerning than the controversial things Trump says.

“The disturbing thing isn’t so much what [Trump] says anymore, it’s the cheers from people behind him and the chants of, ‘Lock her up!’ for example that’s just unseemly,” Flake said. “It does make me fear that it’s going to be a longer process to get out of this than it should be.”

While the signature chant often heard at Trump’s campaign rallies has been reserved for Clinton, at the president’s rally in Iowa on Tuesday night, Trump mentioned Sen. Dianne Feinstein, D-Calif., asking the crowd: “How about Senator Feinstein? That’s another beauty.”

Moments later, the crowd quickly started up the familiar chant.

She also accidentally confirmed that the woman who confronted Sen. Jeff Flake (R-AZ) in an elevator after he voted to move forward with a vote to confirm Kavanaugh is an illegal alien.

Her name is Ana Maria Archila.

Alexandria Ocasio-Cortez, a democratic socialist and rising star within the Democrat Party, called Supreme Court nominee Brett Kavanaugh a liar in a speech to Boston University college students on Monday.

While she did not use the word liar, she essentially lodged the accusation at him when asked about the Kavanaugh controversy during the Q&A.

“A generation ago, committing perjury and lying to Congress multiple times in your nomination hearing would have been an automatic disqualifier. To see the rules that we are willing to dismantle just to insert a partisan pick is truly disturbing,” she told the audience of roughly 350, most of whom were students.

She went on to hail “activism” as the solution, and boasted to the crowd that one of the women who had cornered judiciary committee member Sen. Jeff Flake (R-Ariz.) in an elevator and yelled at him for several minutes after he agreed to vote “yes” on Kavanaugh was from her district.

“Ana Maria Archila is from our district, is from Queens,” Ocasio-Cortez, prompting a round of applause. “In fact, she is an immigration activist, which just goes to show intersectionality and how interwoven all of these fights are. Because she is putting everything on the line and risking deportation … not even for a direct immigration action but for the action of all survivors. And that’s how we need to be. We need to be championing the causes of our neighbors. That is what creates power and movement, coalition building.”

These two heroes, who confronted @JeffFlake this morning, just changed the course of the Kavanaugh process. We❤️you so much, @AnaMariaArchil2 and Maria Gallagher. #StopKavanaugh pic.twitter.com/Hd4gxLWcCE

VIDEO: Senator Flake was confronted by protesters who held the elevator door open for 4 minutes right after he announced that he was a “Yes” on Kavanaugh. pic.twitter.com/PCPUDRrwnd

This isn’t good for the left.