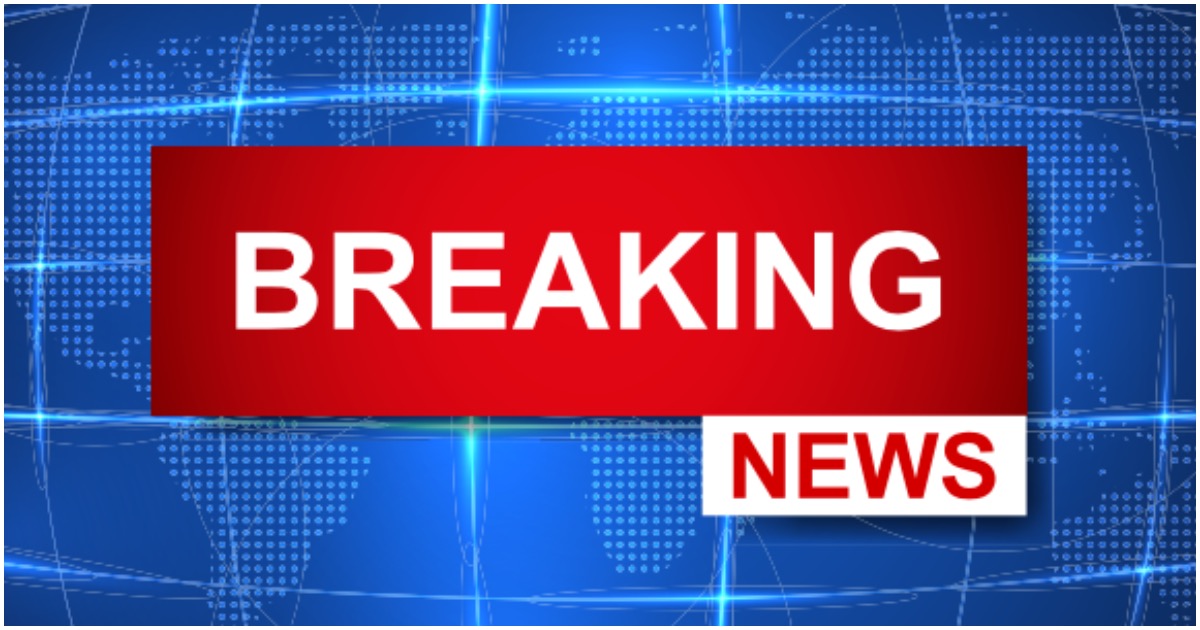 Sex crimes prosecutor Rachel Mitchell, the woman who asked the majority of questions for Republicans during Christine Blasey Ford’s testimony before the Senate Judiciary Committee on Thursday, appears to have completely exonerated Judge Brett Kavanaugh.

Some of the highlights include:

1. “Dr. Ford has not offered a consistent account of when the alleged assault happened.”

2. “Dr. Ford struggled to identify Judge Kavanaugh as the assailant by name.”

3. “When speaking with her husband, Dr. Ford changed her description of the incident to become less specific.”

4. “Dr. Ford has no memory of key details of the night in question—details that could help corroborate her account.”

5. “She does not remember in what house the alleged assault took place or where that house was located with any specificity.”

6. “Perhaps most importantly, she does not remember how she got from the party back to her house.”

Mitchell, who was hired by the Senate Judiciary Committee to assist Republicans, addressed the letter to “All Republican Senators,” and said no senator approved the memo. She noted in the assessment that she is a Republican, but said she is not a political person.

She identified Ford’s case as an example of “he said, she said,” and said her case is “even weaker than that.”

Mitchell, who worked as a sex-crimes prosecutor for nearly 25 years in Arizona, pointed out what she identified as timing inconsistencies. She wrote that Ford appeared to jump around on the timing of the alleged sexual assault, ranging from the “mid 1980s” to “early 1980s,” and then the “summer of 1982.”

“While it is common for victims to be uncertain about dates, Dr. Ford failed to explain how she was suddenly able to narrow the timeframe to a particular season and particular year,” she wrote. 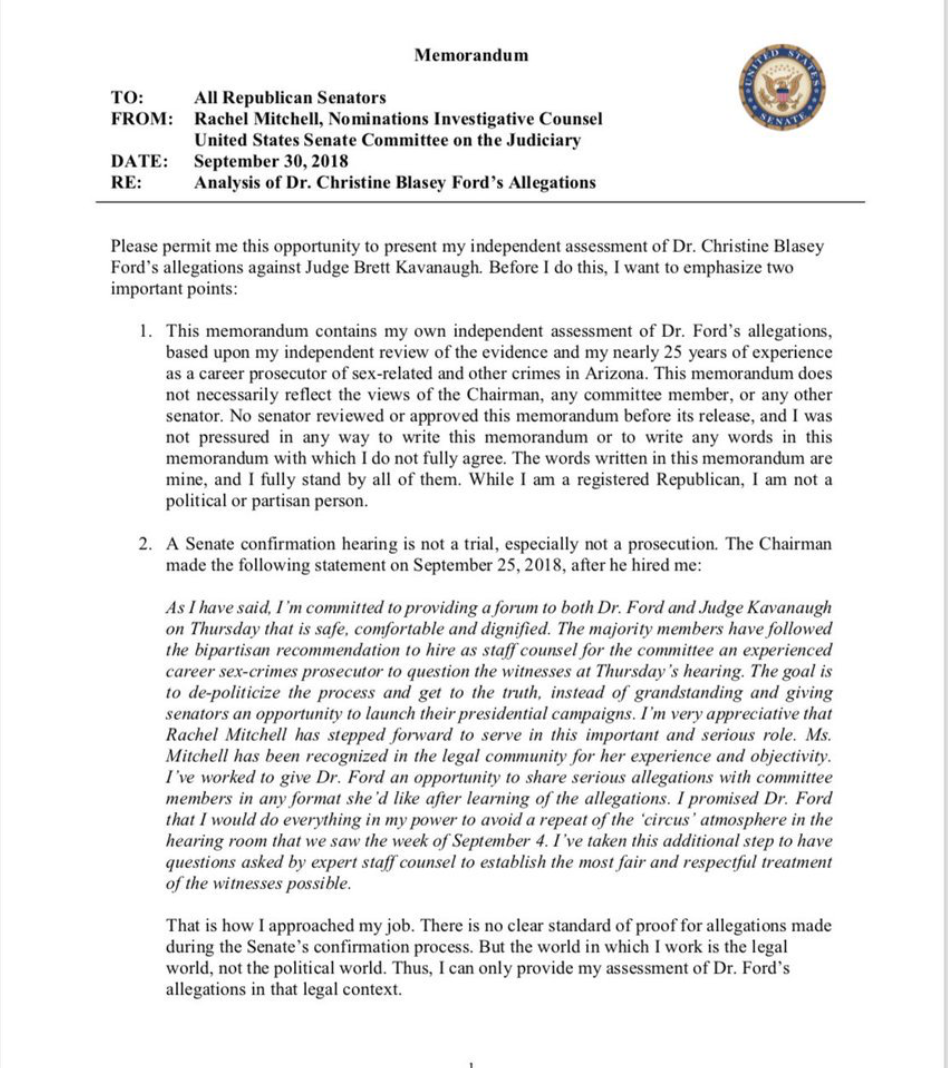 On page two, Mitchell writes, “I do not think that a reasonable prosecutor would bring this case based on the evidence before the committee. Nor do I believe that this evidence is sufficient to satisfy the preponderance-of-the-evidence standard.” 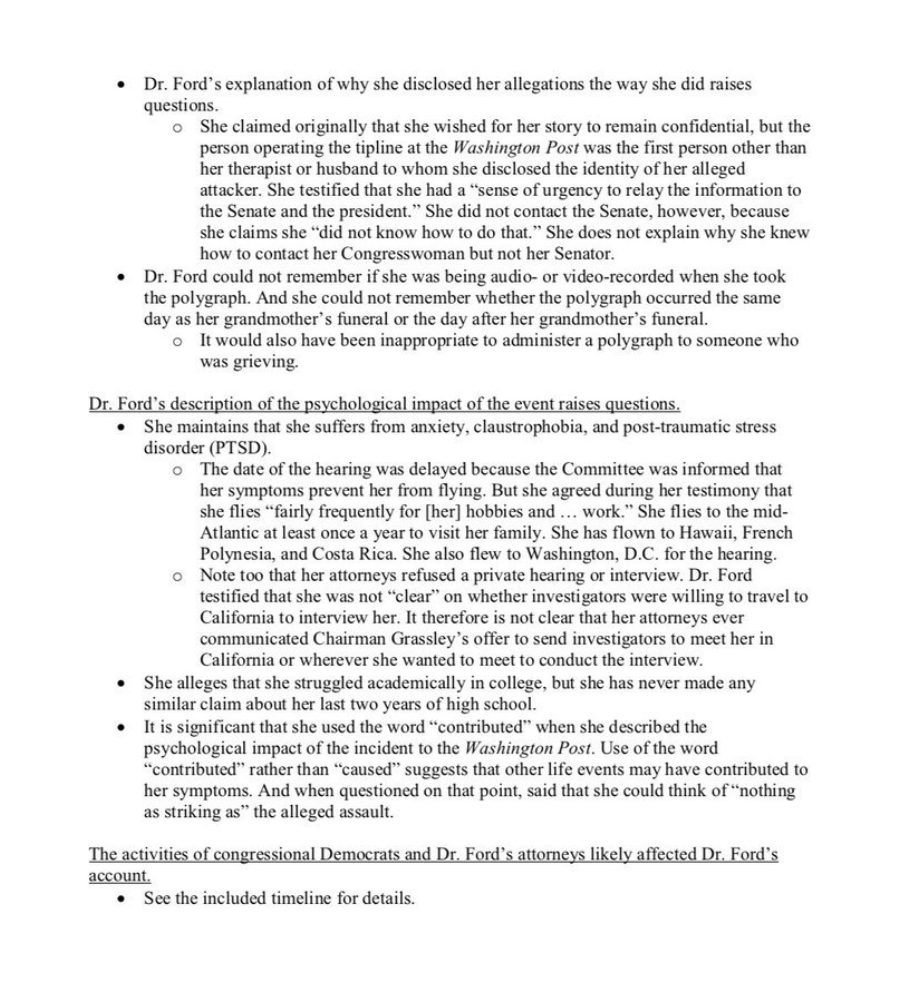 She didn't touch on the two doors portion of Ford's testimony, which was an odd exchange.
Overall the proof that Ford is accusing an innocent man of a crime is very evident. She needs to be charged for false accusations againt #JudgeKavanaugh asap

THANK YOU – as a former victim (stress on former) you never forget the place, the journey, the escape…. none of it!

I'm a social worker and worked with victims for almost 10 years and this report affirms everything I know from working with victims and being a victim of sexual assault. You don't forget the details but you especially wouldn't forget where it happened and how you got home.

For an educated woman to say she didn't know how to contact her Senator, didn't know if polygraph test done on the day of her gramma's funeral or if she was recorded, she doesn't fly but does. She has no reason to come forward, but is an anti Trump pink hat wearing active liberal