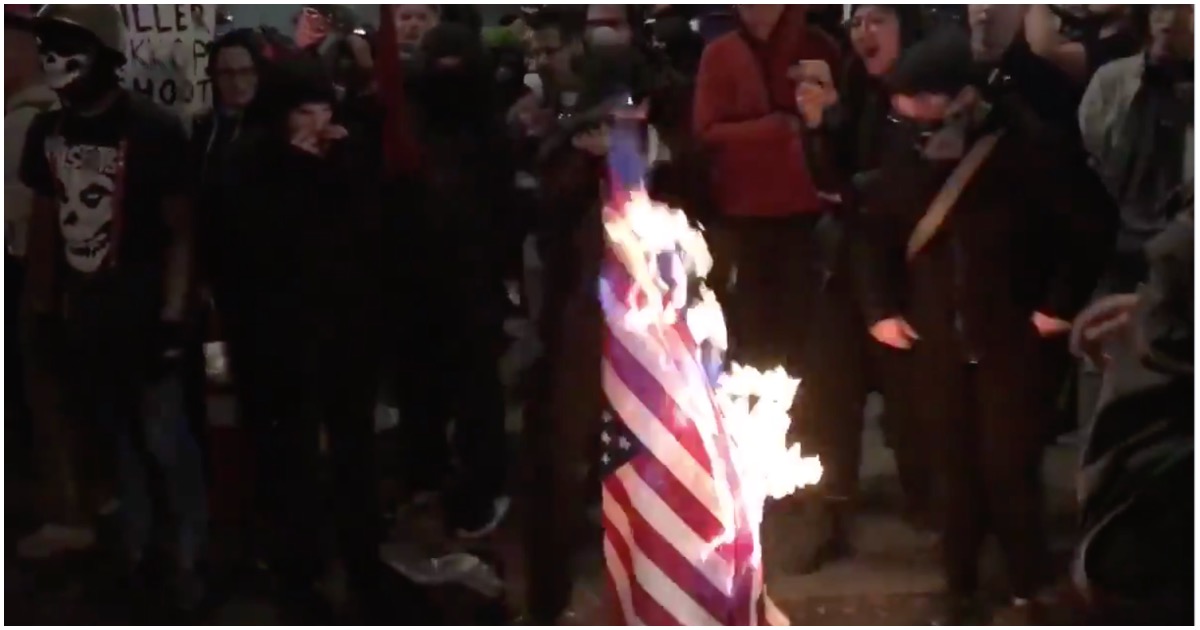 Portland, Oregon is known for being a liberal stronghold and Antifa haven.

During a Patriot Prayer rally, Antifa radicals showed up to express their displeasure with the proud Americans.

At one point, the US flag went up in flames.

A demonstration billed as a march for “law and order” in the streets of Portland descended into chaos as rival political factions broke into bloody brawls downtown Saturday night.

Members of the right-wing group Patriot Prayer and their black-clad adversaries, known as antifa, used bear spray, bare fists and batons to thrash each other outside Kelly’s Olympian, a popular bar on Southwest Washington Street.

The melee, which lasted more than a minute, ended when riot cops rushed in and fired pepper balls at the street fighters.

At one point in the videos, an Antifa member is seen lighting an American flag on fire as group members cheer. Seconds later, someone runs up and grabs the burning flag to put the flames out.

Whoa, Antifa started burning an American flag and a member of the Patriot Prayer and proud boys march ran up and grabbed the flag and ran back to the march.
Wow pic.twitter.com/BQ1ELUA5Z9

They have warned of more violence to come.

Tonight, we put the Republican Party on notice, in defiance to the policy of mass misery. They have championed.

The U.S. government has established concentration camps around the country for Latino people, shamelessly murdering black people, and continues its war machine that has slaughtered Muslim people with impunity for decades. The so-called “Land of the Free” leads the world in incarceration rates per capita, all the while profiteering in the new plantation within the prison walls.

While these atrocities persist unabated the Metropolitan Republican Club chose to invite a hipster fascist clown to dance for them, content to revel in their treachery against humanity. The Republican Party joined by their spineless partners in crime, the Democrats institute a policy of domestic and foreign terror felt the world over.

Our attack is merely a beginning. We are not passive, we are not civil, and we will not apologize. Those of good conscience and clear mind know this state of oppression cannot remain. The US fascist political system is one of the most savage institutions in history and we will combat it relentlessly until all are free of American barbarism.