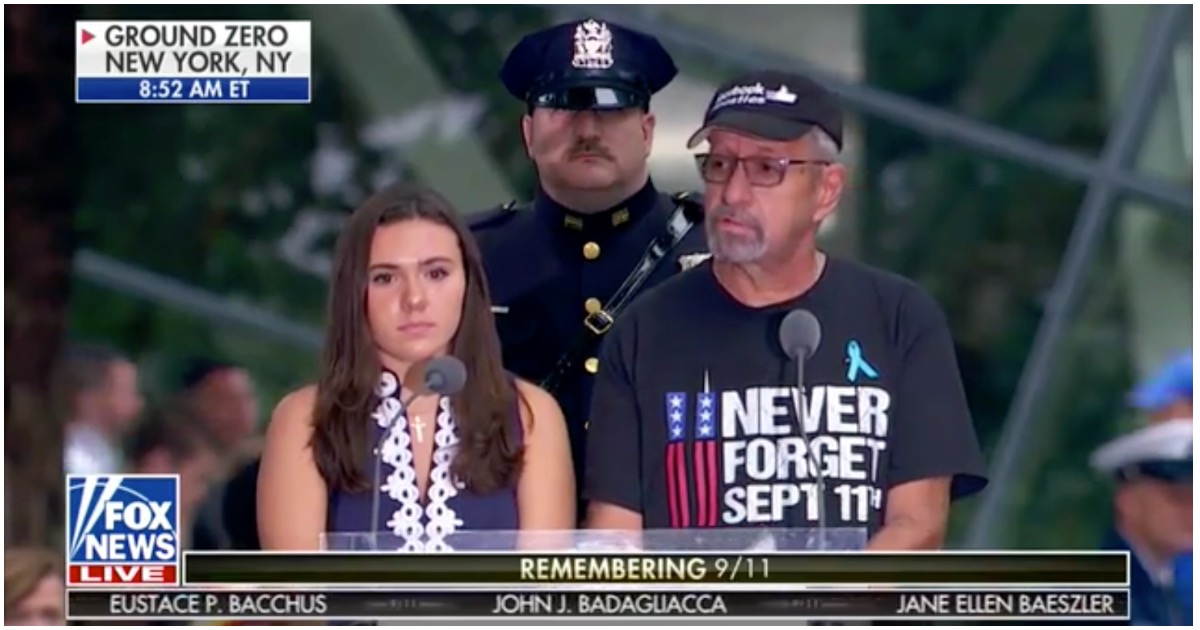 Nicholas Haros lost his mother during the 9/11 terror attack in New York City.

He was one of many volunteers to read off names of the victims at Ground Zero during Tuesday’s memorial.

At a key point in his speech, Haros went off script to light up Democrats for politicizing that fateful day by putting all liberal politicians on blast.

“This year, a representative of the House referred to our loss as just another incident. This year, a network commentator said the president’s performance in Helsinki was a traitorous act as was 9/11,” Haros asserted. “And last week, a senator attacked a Supreme Court nominee and called him a racist for alleged comments after 9/11.”

“Stop. Stop,” he pleaded. “Please stop using the bones and ashes of our loved ones as props in your political theater. Their lives, sacrifices and death are worth so much more. Let’s not trivialize them or us. It hurts.”

“Please stop using the bones & ashes of our loved ones as props in your political theater. Let’s not trivialize them or us. It hurts”

It doesn’t get more heartfelt than that.

Haros went straight for the jugular and told Democrats to cut it out. Exploiting a tragedy for political gain is as low as it gets.

We need to celebrate this great American, Nicholas Haros. God bless you, Sir ????????❤️#NeverForget ❤️????????Call out @NancyPelosi @SenBooker and @JohnBrennan

This morn, Nicholas Haros spoke at the 9/11 memorial. After reading the names, he chastised politicians 4 comparing trivial partisan things 2 9/11

He then randomly walked into a diner on Staten Island

I thanked him for speaking the truth & I think I spoke for more than just me pic.twitter.com/u89VtMxWMx

Hey Joe, you might take a page from Nicholas Haros Jr. who after reading names of people lost on 911 went on to scold people like you for as he said, "Please, stop using the bones and ashes of our loved ones as props in your political theater." I couldn't agree more.

It took much courage for Nicholas Haros to point out the callousness of Democrats in trivializing the tragic events of 9/11 to further their agenda. Just proves how devoid of human feelings they truly are.
May all victims of 9/11 Rest In Peace ????????????#NeverForget911NorBenghazi

Gone but not forgotten.