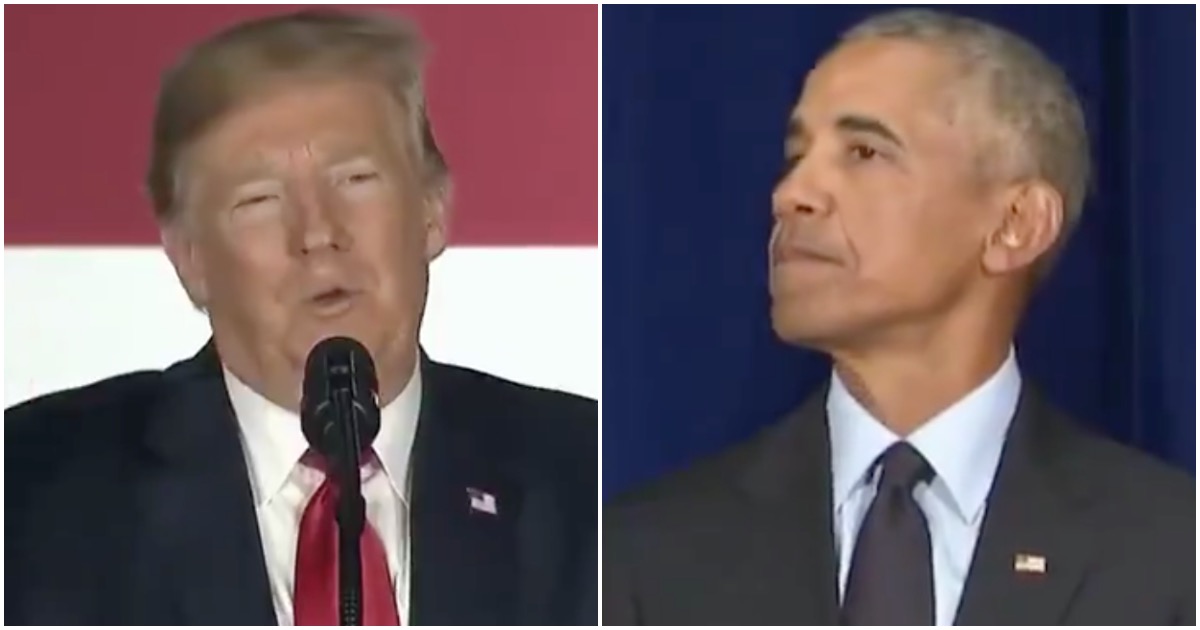 During a speech at the University of Illinois on Friday, former community organizer Barack Obama would not call Donald Trump ‘president.’

Obama referred to 45 as “Donald Trump,” as if he was still a private citizen.

Barack Obama crawled out of his hole Friday and trashed President Trump–calling him out by name, then took credit for the booming economy.

Former President Obama: It did not start with Donald Trump. He is a symptom not a cause. He’s just capitalizing on resentments politicians have been fanning for years. A fear and anger that’s rooted in our past but it’s also born out of the enormous upheavals that have taken place in your brief lifetimes…

.@BarackObama: “[Donald Trump] is just capitalizing on resentments that politicians have been fanning for years.” pic.twitter.com/6NxqP9dfcH

It’s President Trump whether people like it or not. Trump was duly elected by the citizens of the United States of America and has earned the title.

It’s no secret that Obama and Trump disagree on virtually everything, but it is the lack of respect from one president to another that gets people upset.

44 then attempted to take credit for the current state of the economy, which is thriving.

.@BarackObama: “When you hear about how great the economy is doing right now, let’s just remember when this recovery started.” pic.twitter.com/xnWpiX7KQV

Trump, however, wasn’t about to let Obama’s jab go so easily. Ohhh, no.

Check out Trump’s thoughts on Obama’s speech while in North Dakota:

“Sorry I watched it but I fell asleep. He’s found he’s very good, very good for sleeping. I think he was trying to take credit. He was trying to take credit for this incredible thing that’s happening for our country… I have to say this to President Obama, it wasn’t him, but it would have been the same thing. If the Democrats got in with their agenda almost two years ago, instead of having 4.2 up, I think honestly you’d have 4.2 down. You’d be negative. It’d be negative numbers.”

The more President @BarackObama speaks about the ‘good ole years’ of his presidency, the more likely President @realDonaldTrump is to get re-elected.

In fact, the best explanation of President Trump’s victory are the “results” of the Obama Presidency!

Whenever I see Obama in tv, I remind Green movement of Iranian people in 2008.
At that time,
Obama stood with the dictator of Islamic Republic of Iran.#Shut_Up_Obama

????So touched
LIBERAL CENTRIST DEMOCRATS
promise all sorts stuff they
DID NOTHING ab
FOR EIGHT YEARS
except rake????it n deep pockets while they held the House
AND OBAMA ruled except obsess over
SECRETLY FORCED
MONSANTO GMO☠️&
1%
TPP Corporation Nation above law & government
ON US