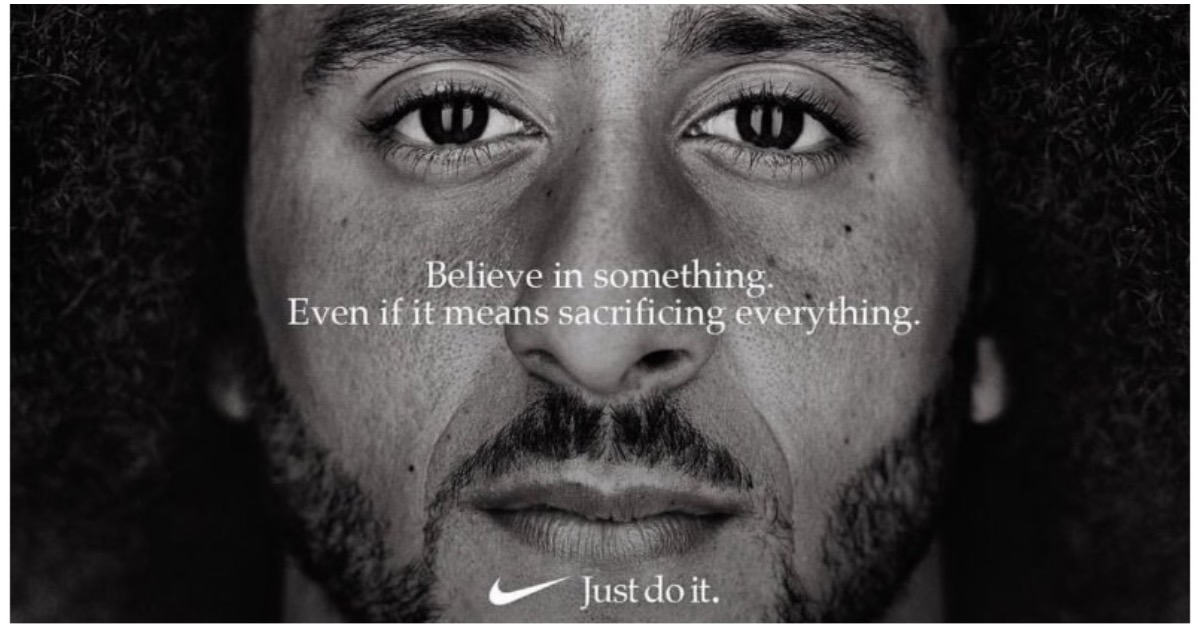 Former NFL quarterback Colin Kaepernick is back in the spotlight once again after Nike decided to make him the face of their 30-year anniversary of the ‘Just Do It’ slogan.

Of course, Kaepernick rose to fame not for being a star (or starting) QB on the field, but for being a social justice warrior who watched his team play from the sidelines during the 2016 season while kneeling for the national anthem.

Many people, who are most likely supporters of President Donald Trump, are not thrilled with the shoe and apparel company’s decision.

BREAKING: Nike had been paying Colin Kaepernick all along, waiting for the right moment. That moment is now, as he becomes the face of the company’s 30th anniversary of the “Just Do It” campaign. pic.twitter.com/uccpDStbq5

Conservative commentator Ben Shapiro weighed in with his thoughts on the tweet above:

Name the thing he sacrificed. He was benched before he protested. He’s become far more celebrated and famous than his performance would justify. Now he’s got a lucrative ad contract. Ali sacrificed something. Kaepernick didn’t. https://t.co/cvnNAgiG9K

Others gave their opinions:

All I ever really wanted was for this debate to continue forever **guzzles bleach** https://t.co/qgXrqNICJH

Is this move by Nike “strategically insane?” Well, from the looks of the tweet below of a pair of Nike’s going up in flames, it would sure appear that way.

Charles Robinson of Yahoo Sports later reported that Kaepernick and Nike agreed to a new contract despite the fact Kaepernick has been with the company since 2011. Robinson added that “interest from other shoe companies” played a part in the new agreement.

Per Robinson, the contract is a “wide endorsement” where Kaepernick will have his own branded line including shoes, shirts, jerseys and more. According to Robinson, Kaepernick signed a “star” contract that puts him level with a “top-end NFL player” worth millions per year plus royalties.

A lot behind the curtain here. @Nike had Kaepernick since 2011 but this is actually a new deal done by Kaepernick’s reps @markgeragos & @meiselasb. Nike sat on Kaepernick for 2 years w/ no idea what to do with him. Interest from other shoe companies absolutely changed their tune. https://t.co/IJJnjxWHLS

Details on Kaepernick and #Nike:

– It’s wide endorsement. He’s going to have his own branded line. Shoes, shirts, jerseys, etc. There will be Kaepernick apparel.

– Contract is a “star” deal on par with a top end #NFL player. Millions per year. Star deals also include royalties.

Nike seems to be making a calculated political move by placing Kaepernick in their ad. Either that, or they are trying to capitalize monetarily on the unemployed quarterback’s popularity among Democrat voters.

What are your thoughts on the situation? Bad move by Nike or no big deal?