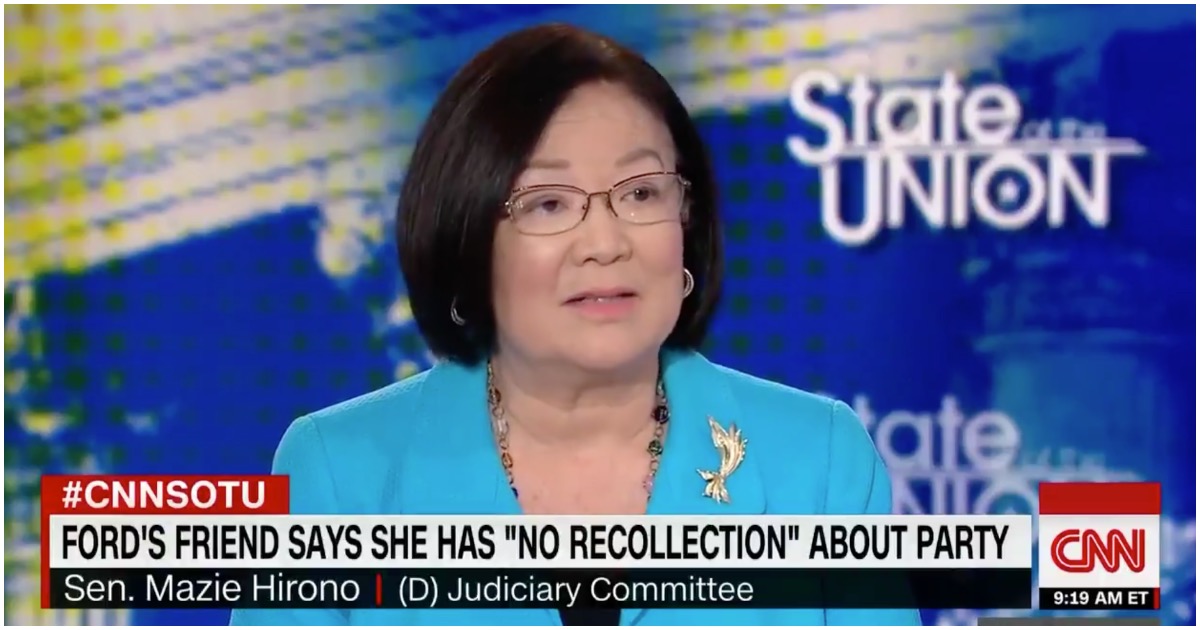 Hawaii Senator Mazie Hirono (D) decided to fill both roles at once.

She says Judge Brett Kavanaugh cannot be confirmed to the Supreme Court because he is pro-life and conservative.

This Democrat Senator is LITERALLY arguing that if you are not a Democrat, your presumption of Innocence before being guilty is over.

29/
.
Sen. Hirono Says Kavanaugh Can’t Be Trusted Because Of Views On Abortion
(I swear to go I'm not trolling….watch the video)

Pretty much sums it up. He is guilty because he is a conservative white male, not because he did what he is accused of. https://t.co/xDVcWP9GMI

We need Senator Hirono on TV as much as possible this week to talk about Kavanaugh. She seems to be the only honest Democrat, admitting the acccusation is irrelevant, it’s his positions that matter and this just makes it easier to oppose him.

When will everyone wisen up? Roe v Wade will never be overturned. Both parties use it to fire up their base, but the powers-that-be do not want it to be overturned. Look at the socio-economic ramifications if overturned.

@maziehirono is extremely biased and it’s evident here! this is why their opinions are so heavily favoring the accuser. They don’t believe Brett to begin with about anything … he could say the sky is blue and they wouldn’t agree solely off their basis of who he is! #pathetic

Hirono wants all American men to “shut up and do the right thing” when it comes to supporting Kavanaugh’s sexual assault accuser, Christine Blasey Ford.

Conservative actor James Woods wasn’t pleased, and he lashed out like nobody would’ve expected.

There are hallowed American cemeteries around the globe filled with men who did the right thing, you sexist witch. Go fuck yourself. https://t.co/gBy8oxatXI

Wow. Rarely have I ever heard Mr Woods speak this way. Sadly, I think many of us feel exactly as he does. Thankfully, his words can echo louder than the ones like us with 300 or 400 followers. Men, shut up? Plain old stupid to say that.

Get ready for the gender war. For some reason women think they somehow became superior to men. Remember yin and yang,black and white, night and day,one compliments the other,two dimensional women and 3d men ,compliments not enemys. Natures grand design.This is not a popular idea