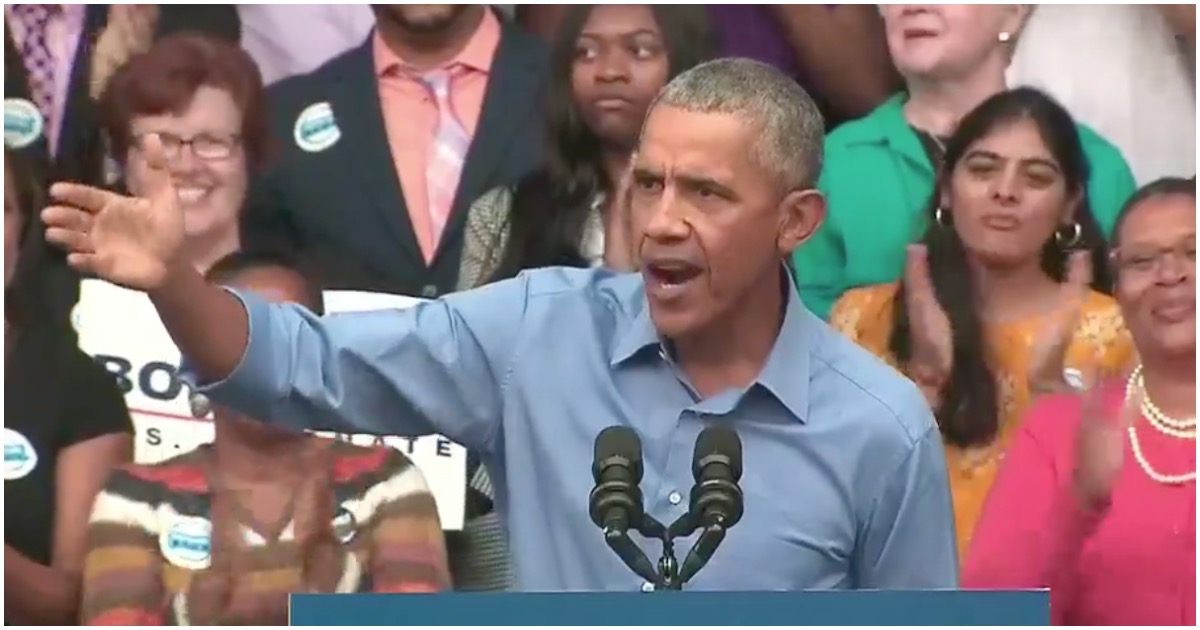 At a rally for Pennsylvania Democrats, former community organizer Barack Obama snapped at young attendees for being on their phones.

He accused them of not paying attention while he was speaking.

Barack Obama wasn’t happy those young whipper snappers apparently weren’t hanging on his every word (about himself) on Friday.

Obama once again took credit for the current booming economy:

Barack Obama in Pennsylvania: "When you hear right now folks taking credit for this economic miracle, it's like, hold up. Hold up. Hold up. They act like it just started. Please." (via ABC) pic.twitter.com/f2Gbgusg16

This economy isn’t booming because of President Obama’s policies – it’s booming because we’ve been rolling back the failed policies of his administration since day one. Jobs are coming back, confidence is back, and America is back – and we are just getting started! #VVS18

Obama lied to the American people about the strength of radical Islam while burying 470,000 documents related to the raid on Osama bin Laden’s compound.

In a detailed exposé in The Weekly Standard, journalist and author Stephen F. Hayes showed that Obama buried a staggering number of documents from Osama bin Laden’s compound, and essentially lied to the American people about the real status of Al Qaeda in order to win votes.

A key piece of Obama’s re-election was the elimination of bin Laden and the claim that the administration had Al Qaeda on the run. Afghanistan was won, the incumbent president boasted, and Islamic terrorism was waning. The path forward was to lift sanctions on Iran and move forward.

There was one big problem: The administration knew it wasn’t true, but repeated it anyway.

“The self-proclaimed ‘most transparent administration in history’ had spent more than five years [by 2016] misleading the American people about the threat from al Qaeda and its offshoots and had paid very little price for having done so,” Hayes explained.

When the CIA and Navy SEALs raided bin Laden’s compound in Pakistan, they brought back cases upon cases of documents, along with hard drives that contained gigabytes of important intelligence.

“In the spring of 2012, with the Republican presidential primaries nearing an end and shortly before the first anniversary of the successful raid on bin Laden’s compound, Obama’s National Security Council hand-picked 17 documents to be provided to the Combating Terrorism Center at West Point for analysis,” The Weekly Standard revealed.

Obama was recently caught in another lie, claiming he never attacked the press – an obvious swipe at President Donald Trump for constantly referring to the media as “fake news.”