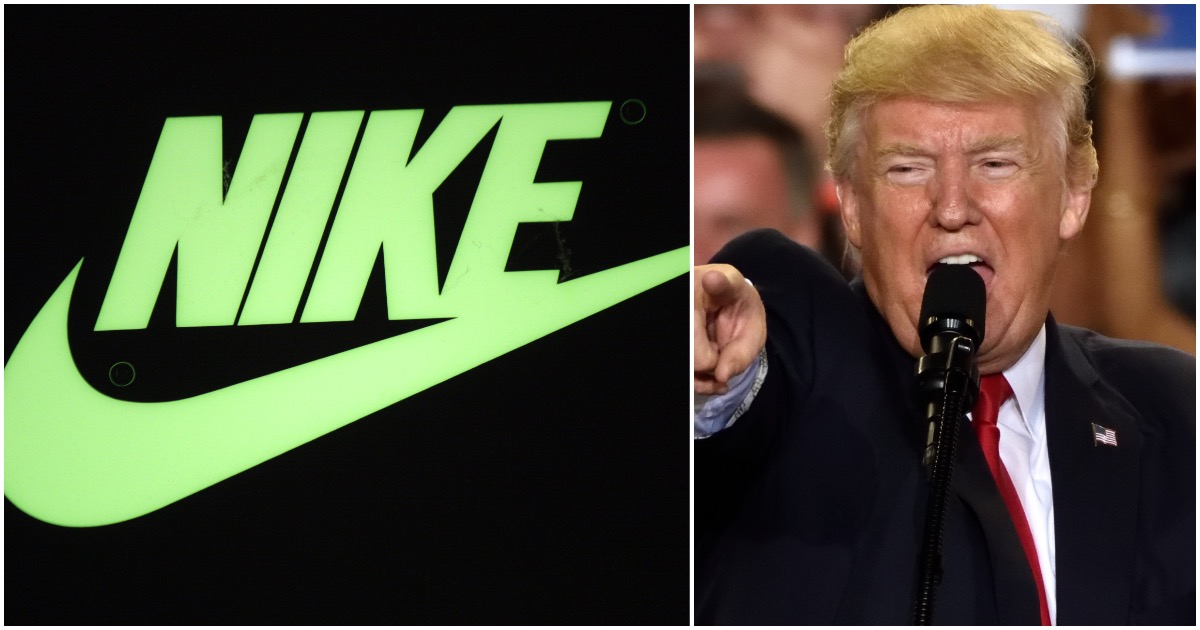 President Donald Trump was not pleased with Nike for using anthem kneeling quarterback Colin Kaepernick as the face of their 30-year anniversary of the “Just Do It” slogan.

In fact, many Americans were displeased, as well.

Nike shoes and clothing around the country have gone up in flames, as people are showing their dissatisfaction with the brand in light of the recent controversy.

Trump’s tweet to Nike and Kaepernick should have the company in fear.

“Just like the NFL, whose ratings have gone WAY DOWN, Nike is getting absolutely killed with anger and boycotts. I wonder if they had any idea that it would be this way? As far as the NFL is concerned, I just find it hard to watch, and always will, until they stand for the FLAG!”

Just like the NFL, whose ratings have gone WAY DOWN, Nike is getting absolutely killed with anger and boycotts. I wonder if they had any idea that it would be this way? As far as the NFL is concerned, I just find it hard to watch, and always will, until they stand for the FLAG!

Nike stock fell nearly $4 billion in the aftermath of the new ad.

Clearly, Nike Inc. was willing to risk the inevitable backlash, which has already begun among some sports fans — #BoycottNike and videos of fans burning Nike gear are already trending online — to promote Kaepernick’s controversial message.

“The fallout was no surprise but Nike may be betting that the upside of a Kaepernick endorsement is worth angering conservative Americans and supporters of President Donald Trump,” writes Bloomberg.

Some thoughts on Nike from conservative actor James Woods:

To be truly effective, make sure you not only #DumpNikeStock, but dump any investment fund or mutual fund that holds @Nike stock. Further send an email stating the reason you are dumping that mutual fund. #DumpNike #ScrewNike

As usual corporate giant @Nike uses a provocative ad campaign to make money and money is all its present campaign is about. I venture to say the corporate honchos don’t care anymore about black Americans than they do the children in their Asian sweatshops. https://t.co/3peQDufSfH

In a surprise twist, Nike has generated $43 million worth of buzz, per Bloomberg:

In less than 24 hours since Kaepernick first revealed the spot on Twitter, Nike received more than $43 million worth of media exposure, the vast majority of it neutral to positive, according to Apex Marketing Group. That far outweighs the risk of alienating some customers, said Bob Dorfman, a sports marketing executive at Baker Street Advertising.

Nike’s move was more or less the same thing IHOP did when they switched to IHOB.

It was a joke on the public.