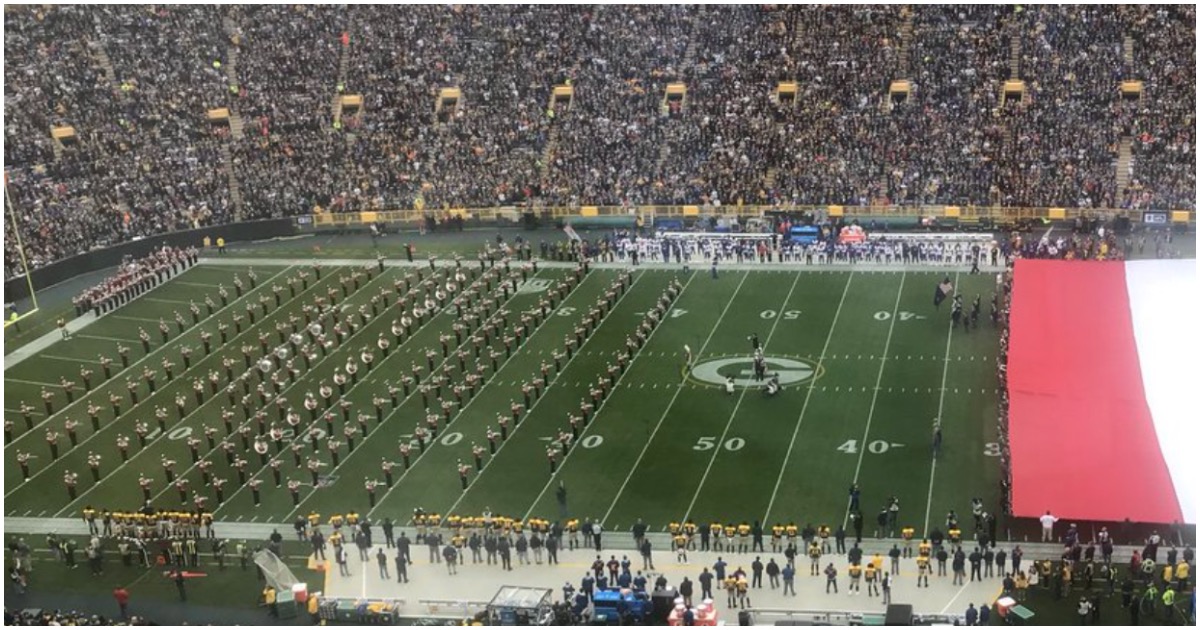 The NFL’s Green Bay Packers unveiled a version of the American flag that was off-putting to many in attendance.

Why would they do this?

One can only speculate, but there’s a decent chance you already know the answer.

That was a bridge too far even for the social justice sports network.

Not sure what country today’s Packers-Bills game is being played in but that’s not my flag pic.twitter.com/XGsk75sPsM

One person described the flag as “very unamerican”…

No offense to the Packers or, y’know, America, but did you not clear the rights for the actual flag, guys? pic.twitter.com/sVMhi1923p

How many players decided to disrespect Old Glory during the 2018-19 season opener between the Atlanta Falcons and defending Super Bowl champion Philadelphia Eagles?

Well, with Nike’s Colin Kaepernick ad airing during the game, Americans may have figured the kneeling controversy was not yet entirely dead and gone.

They may be right.

In fact, two Eagles players took a seat on the bench before the anthem was through, per USA Today:

Two Philadelphia Eagles players – defensive end Michael Bennett and Jay Ajayi – took seats on the bench near the end of “The Star-Spangled Banner,” but that was the extent of it.

All of the Atlanta Falcons players stood at attention for the duration, as did the bulk of the Eagles, while the Philadelphia-bred R&B group Boyz II Men sang the anthem.

On protests, only one was Michael Bennett, who walked around during . much of the anthem and sat near the end of it. All the Eagles were on the field.

There were no visible demonstrations by NFL players during the national anthem before the season opener on Thursday night.

All of the Atlanta Falcons and most of the Philadelphia Eagles stood throughout the anthem, including players who have previously demonstrated, such as Eagles safety Malcolm Jenkins.

Eagles defensive end Michael Bennett wandered around the bench throughout the anthem and sat down near the end, but he did not kneel.

Most of the players reportedly had their hands over the chests throughout the anthem.

All the players on the Atlanta Falcons and Philadelphia Eagles appeared to stand during the national anthem for the first game of the year.