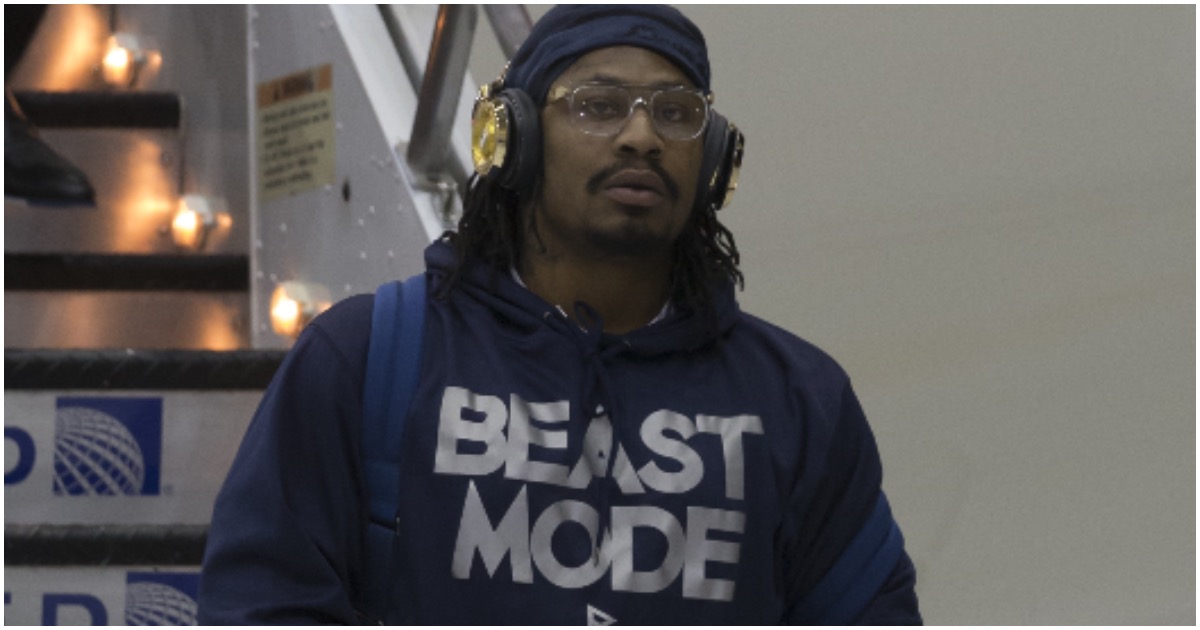 Kneeling on the sidelines during the national anthem is one thing.

At the very worst, one can say at least the players are recognizing “The Star Spangled Banner” – just in their own way.

What Oakland Raiders running back Marshawn Lynch did on Sunday (and the week before and for multiple seasons before that) is not receiving any attention.

Oakland Raiders running back Marshawn Lynch sat on a cooler for the national anthem, while Denver receiver Demaryius Thomas and linebacker Brandon Marshall went inside the tunnel.

The sitting on the bench I take issue with. But you don’t hear anyone complaining about Marshawn Lynch sitting out the anthem ????????‍♂️

Marshawn Lynch says he's been sitting for 11 seasons, but nobody cares and is ignored because he produces numbers on the field.

Must suck to HAVE to live in a country that provides him with opportunities to earn $Millions. There's a lot more people in the world doing it harder than him. But hey you keep sitting you're doing Gods work. @MoneyLynch even his handle wreacks of hypocrisy. #tokenism

Raiders’ Marshawn Lynch Stays Seated During the National Anthem https://t.co/B26KhQg9sv via @BreitbartNews Too bad all that sitting on his fat ass doesn't win any games, just drawing a fat pay check and disrespecting everyone.

Sitting during the national anthem is way more disrespectful than kneeling. Why does Marshawn Lynch get a pass and Kaepernick is vilified?

President Trump sent this tweet after the 2018 season’s opening game:

Wow, NFL first game ratings are way down over an already really bad last year comparison. Viewership declined 13%, the lowest in over a decade. If the players stood proudly for our Flag and Anthem, and it is all shown on broadcast, maybe ratings could come back? Otherwise worse!

Then, later in the day, what everyone thought might happen happened.

How many players protested? Three.

And it was blatant. Two took a knee.

Three Miami Dolphins players protested during the national anthem before their season opener against Tennessee on Sunday.

Wide receivers Kenny Stills and Albert Wilson knelt during the anthem while defensive end Robert Quinn raised his fist, according to The Associated Press.

“I feel like the NFL could’ve done a better job of controlling the narrative from the beginning,” Stills said, according to the Post. “If the NFL would have done something like Nike did — some type of campaign, explaining this whole situation, having his back, supporting us, supporting our First Amendment right — then this thing would be going in a whole different direction. I think we’ve made progress but obviously we have a ways to go.”

Colin Kaepernick, the man who started the anthem kneeling trend back in 2016, praised the Miami Dolphins players.

My Brothers @kstills and @ithinkisee12 continue to show their unwavering strength by fighting for the oppressed! They have not backed down, even when attacked and intimidated. Their courage will move the world forward!

@MiamiDolphins ONLY team in the entire NFL to have players kneeling. No leadership. They are employees. Who is the boss? Total embarrassment. #StandForTheFlag #Dolphins #noRespect

Miami Dolphins were congratulated by Kap for kneeling.
They couldn’t even look at our flag ?
Kap was delighted. Shame on you @Nike !!!!!!!

@MiamiDolphins I've been a lifelong Dolphin fan but I'll never watch, attend or anything for a Dolphins game unless the kneeling players are fined and benched. Don Shula must be beside himself with embarassment. Shame on the Dolphins.! Stand up for America!

I wanted to become a Dolphins fan after living on and off in Fla for a long time, but they have always stunk and now they are kneeling, so no way. You should at least have a winning team before you get distracted on idiocy.