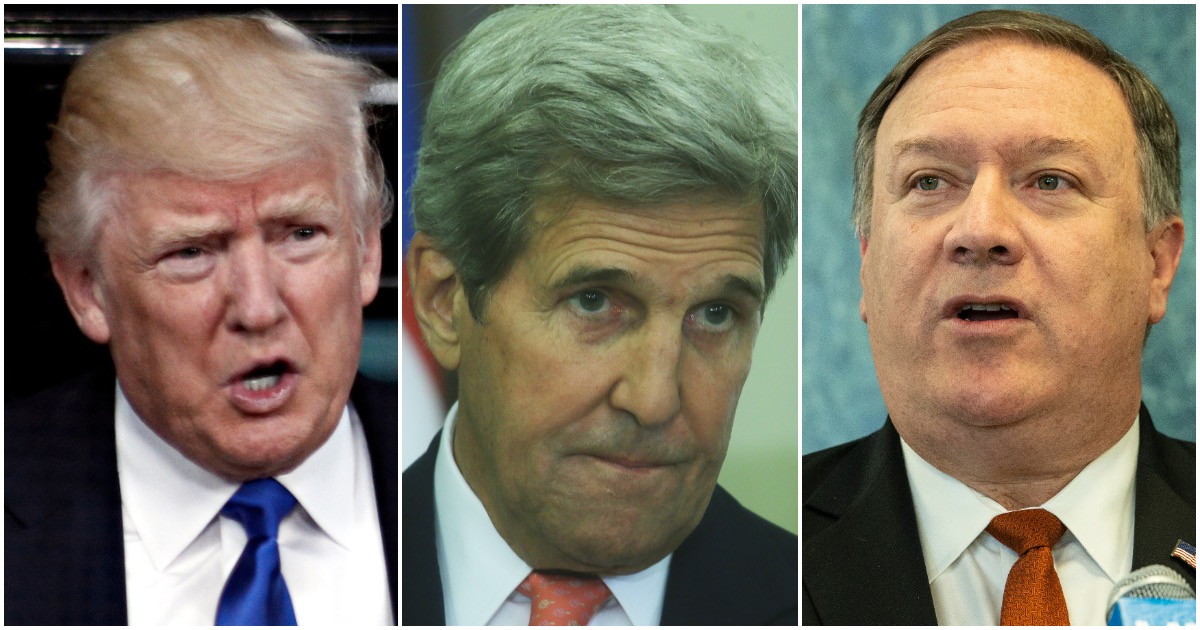 Former Secretary of State John Kerry has admitted to continually meeting with Iranian leaders regarding the nuclear agreement signed during the Obama years.

Once he took office, President Donald Trump abandoned the deal.

That hasn’t stopped Kerry from trying to disrupt 45’s agenda, however.

Secretary of State Mike Pompeo unloaded Friday on his Obama-era predecessor John Kerry for “actively undermining” U.S. policy on Iran by meeting several times recently with the Iranian foreign minister, who was his main interlocutor in the Iran nuclear deal negotiations.

In unusually blunt and caustic language, Pompeo said Kerry’s meetings with Mohammad Javad Zarif were “unseemly and unprecedented” and “beyond inappropriate.” President Donald Trump had late Thursday accused Kerry of holding “illegal meetings with the very hostile Iranian Regime, which can only serve to undercut our great work to the detriment of the American people.”

Pompeo said he would leave “legal determinations to others” but slammed Kerry as a former secretary of state for engaging with “the world’s largest state-sponsor of terror” and telling Iran to “wait out this administration.” He noted that just this week Iranian-backed militias had fired rockets at U.S. diplomatic compounds in Iraq.

“You can’t find precedent for this in U.S. history, and Secretary Kerry ought not to engage in that kind of behavior,” an agitated Pompeo told reporters at the State Department. “It’s inconsistent with what foreign policy of the United States is as directed by this president, and it is beyond inappropriate for him to be engaged.”

Kerry, who is promoting his new book “Every Day is Extra,” tweeted a response to Trump that referred to the president’s former campaign chairman, Paul Manafort, who agreed on Friday to cooperate with the special counsel’s investigation into Russia interference in the 2016 presidential election and possible coordination between Russia and the Trump campaign.

“Mr. President, you should be more worried about Paul Manafort meeting with Robert Mueller than me meeting with Iran’s FM. But if you want to learn something about the nuclear agreement that made the world safer, buy my new book,” said Kerry.

John Kerry had illegal meetings with the very hostile Iranian Regime, which can only serve to undercut our great work to the detriment of the American people. He told them to wait out the Trump Administration! Was he registered under the Foreign Agents Registration Act? BAD!

Reports are circulating that Kerry is considering a run for president in 2020.

What are Trump’s thoughts?

He only needed five words to sum it up: “looks really good – FOR ME!”

Trump said he hopes that Kerry decides to run — for his sake — and called the former Democratic presidential candidate and US Senator “the father of the now terminated Iran deal.” Trump said that he would be “lucky” if Kerry decided to jump in.

“I see that John Kerry, the father of the now terminated Iran deal, is thinking of running for President,” Trump said, “I should only be so lucky – although the field that is currently assembling looks really good – FOR ME!”

I see that John Kerry, the father of the now terminated Iran deal, is thinking of running for President. I should only be so lucky – although the field that is currently assembling looks really good – FOR ME!

If he decides to run, Kerry will certainly join a crowded Democrat field.