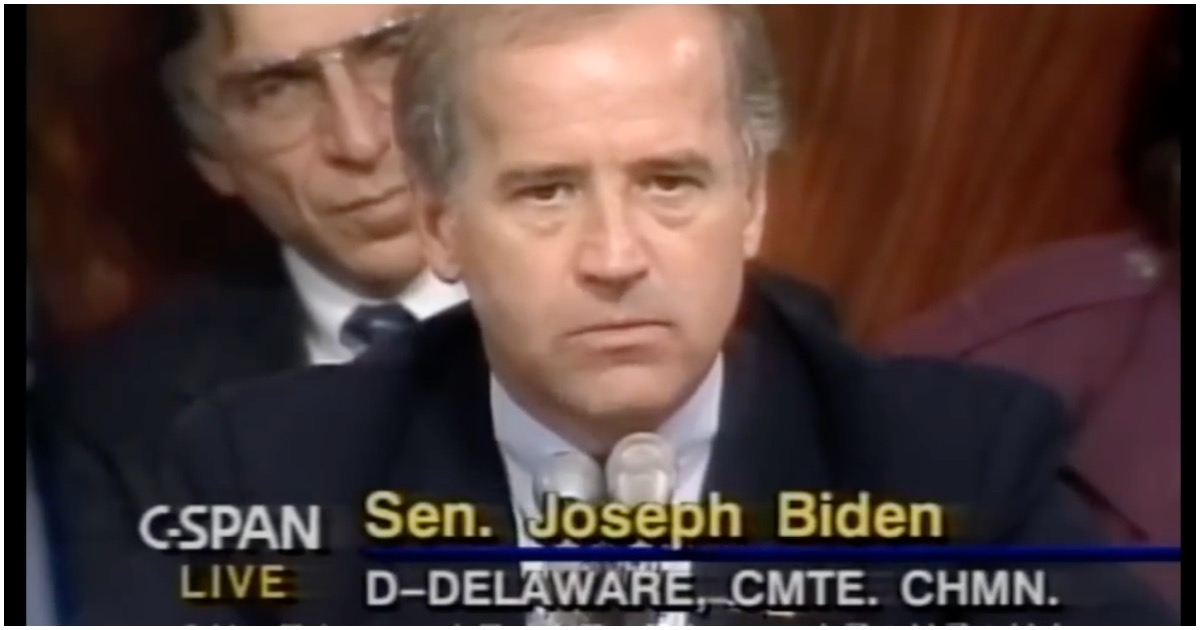 During the confirmation hearings of Supreme Court nominee Clarence Thomas back in 1991, Biden claims the “FBI explicitly does not, in this or any other case reach a conclusion, period.”

“The reason why I have worked so hard to keep FBI reports totally secret is because they have little or no probative weight, because they are hearsay,” Biden said. “The FBI does their interviews by walking up to person A and saying will you speak to us, and the guarantee is anonymity. That is what the FBI tells the person, and the FBI speaks to the person. Now, for us to summarily go back and say, as a matter of policy, that we are going to break the commitment the Federal Government makes to an individual, in order to get that individual to cooperate in an investigation, is disastrous.”

“And the last thing I will point out, the next person who refers to an FBI report as being worth anything, obviously doesn’t understand anything,” Biden later said. “FBI explicitly does not, in this or any other case reach a conclusion, period, period. So, Judge, there is no reason why you should know this. The reason why we cannot rely on the FBI report, you would not like it if we did because it is inconclusive. They say he said, she said, and they said, period. So when people wave an FBI report before you, understand they do not, they do not reach conclusions. They do not make, as my friend points out more accurately, they do not make recommendations.”

If you listen to Biden in the video, he said the report was basically all he said/she said.

Joe may have crossed the line with female Secret Service agents while vice president.

The report states Biden would intentionally strip naked, “offending” them, as one would imagine.

In a 2014 book titled “The First Family Detail” by best selling author Robert Kessler, the allegation is made that Biden offends female Secret Service agents by getting naked in front of them.

“Agents say that, whether at the vice president’s residence or at his home in Delaware, Biden has a habit of swimming in his pool nude,” Mr. Kessler writes, according to the Daily Mail. “Female Secret Service agents find that offensive.”

Jon Gabriel, who is the editor-in-chief of Ricochet, appeared to substantiate the claims made by the female Secret Service agents over Twitter recently. Gabriel also suggested that Biden’s behavior was not just limited to the swimming pool but that he walked around his house like that.